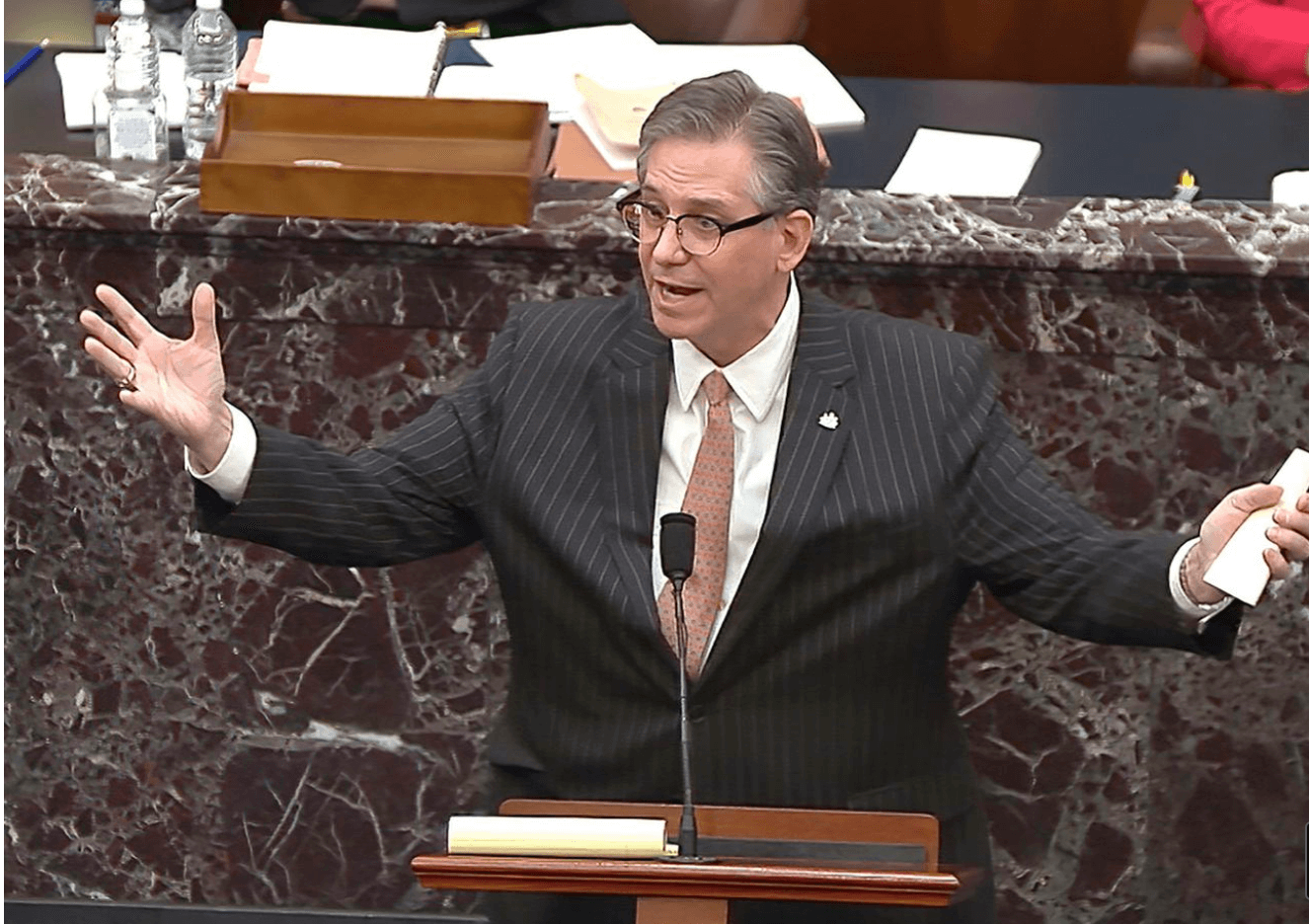 House Impeachment managers called it The Big Lie. The insurrection on Jan. 6 was a response to it. Former President Donald Trump promoted it relentlessly. Many Republican leaders repeated it. It still resonates with many Americans.

It is the myth of the stolen 2020 presidential election—the claim that but for massive voter fraud, Trump would not only have won reelection, but would have won in a landslide.

The myth of the stolen election is what Trump was referring to in his speech to the crowd before the attack on the Capitol: “We have come to demand that Congress do the right thing and only count the electors who have been lawfully slated, lawfully slated.”

The myth of the stolen election has numerous differing details. In Trump’s Jan. 2 haranguing of Georgia Secretary of State Brad Raffensperger to “find” enough votes for Trump to win Georgia, it included triple counting of ballots for Joe Biden, corrupt voting machines, thousands of dead and out-of-state people voting, forged signatures, suitcases full of ballots appearing from nowhere and the shredding lawful ballots.

A myth like this can destroy a democracy. That is what happened to the Weimar Republic in Germany. The myth in that case was the legend of the stab in the back.

Because of wartime censorship, World War I ended without the German people having any inkling of the military reverses the army suffered on the Western Front. No German territory was occupied by any foreign power at the end of the war. Thus, losing the war was a shock and demanded an explanation.

The explanation that spread in the years following the Armistice was that officials of the Weimar Republic, and others, including Jews, Communists, and Socialists, had stabbed the armed forces in the back, undermining the war effort and bringing on defeat.

This myth contributed to the failure of the Weimar Republic to put down lasting democratic roots in Germany. If millions of Americans believe that Biden was not actually elected, something similar may eventually happen to us.

The question is, do Americans actually believe the myth of the stolen election?

On the surface, the answer is obviously yes. Polls have consistently shown that large majorities of Republicans question the November election result. In one poll conducted in late December, more than 70 percent of Republican voters said that they agreed with Trump that he received more votes than did Biden.

The myth of the stolen election serves as one basis for Party activists to challenge Republican votes in Congress for impeachment and conviction. At the first town hall event since he was one of 10 U.S. GOP House members to vote for Trump’s impeachment, U.S. Rep. Peter Meijer, R-Mich., was urged by one constituent to stop saying the election had not been stolen.

Yet, there is reason to hope that Americans do not actually believe this myth, at least not literally.

For one thing, despite reports that this was contrary to Trump desire, the impeachment defense in the Senate did not argue election fraud.

Before the trial, Republican Senators supporting Trump had warned his legal team to stay away from such claims. U.S. Sen. Lindsey Graham, R-S.C., a vocal Trump ally, said: “If they start trying to prove that Georgia and Pennsylvania and Wisconsin were stolen, that’s when you’re going to lose everybody.”

Those Republican senators who voted to convict, including U.S. Sen. Pat Toomey, R-Pa., condemned Trump for falsely fanning the flames of violence with spurious claims of election fraud.

The harsh reaction to criticisms of Trump do not necessarily mean that Republicans believe the election was stolen. Toomey, for example, was criticized by Pennsylvania state Rep. Dawn Keefer, R-York, for allowing impeachment twice on “fabricated charges.” That presumably meant in the recent impeachment that Trump did not incite violence, not that the election was stolen.

You do not hear much of anything from Toomey’s critics about voting machines, suitcases filled with ballots, or that Trump won Pennsylvania.

Even Trump has publicly downplayed election fraud. In responding to McConnell on Feb. 15, Trump made only a passing and oblique reference to “election integrity” issues in Georgia.

But if election fraud is not literally believed, what do all those polls showing high levels of skepticism about the election result mean?

In a December Washington Post column, Dan Cassino, a professor of government and politics at Fairleigh Dickinson University, reminded readers that only 30 percent of Republicans in 2012 expressed confidence in the reliability of that presidential election, about the same percentage as in 2020. Furthermore, 37 percent of Democrats said that President George W. Bush had stolen the 2004 presidential election in Ohio.

In other words, partisans often feel that elections they lose were somehow unfair. Not every such dissatisfaction should be taken literally.

Cassino believes that this year is different in that Republicans report a higher level of certainty that something was wrong with the voting. So, while the myth of the stolen election may not directly threaten our democracy, we do still need to be vigilant in combatting it.

What is needed is more precision in discussions about voting. There is a big difference between criticizing how the 2020 election was conducted and claiming that there was fraud.

In Pennsylvania, there is going to be debate about changes in our mail-in election law. These debates may raise legitimate concerns.

But proponents of any changes in the current law must be closely questioned concerning the 2020 election result. The absence of fraud and the reliability of the vote in favor of Biden must be insisted upon before any changes in election law can be considered. Otherwise, proponents of change will be supporting the myth of the stolen election.

Republican leaders now seem anxious to downplay Trump’s claims of election fraud. They must be pressed to confront and reject them. They must reassure the public that the mail-in voting we just practiced, and the result it produced, were legitimate.

Only then we can safely leave the myth of the stolen election behind us.

The post We have to defeat the myth of the stolen election. We risk destroying our democracy if we don’t | Bruce Ledewitz appeared first on Pennsylvania Capital-Star.