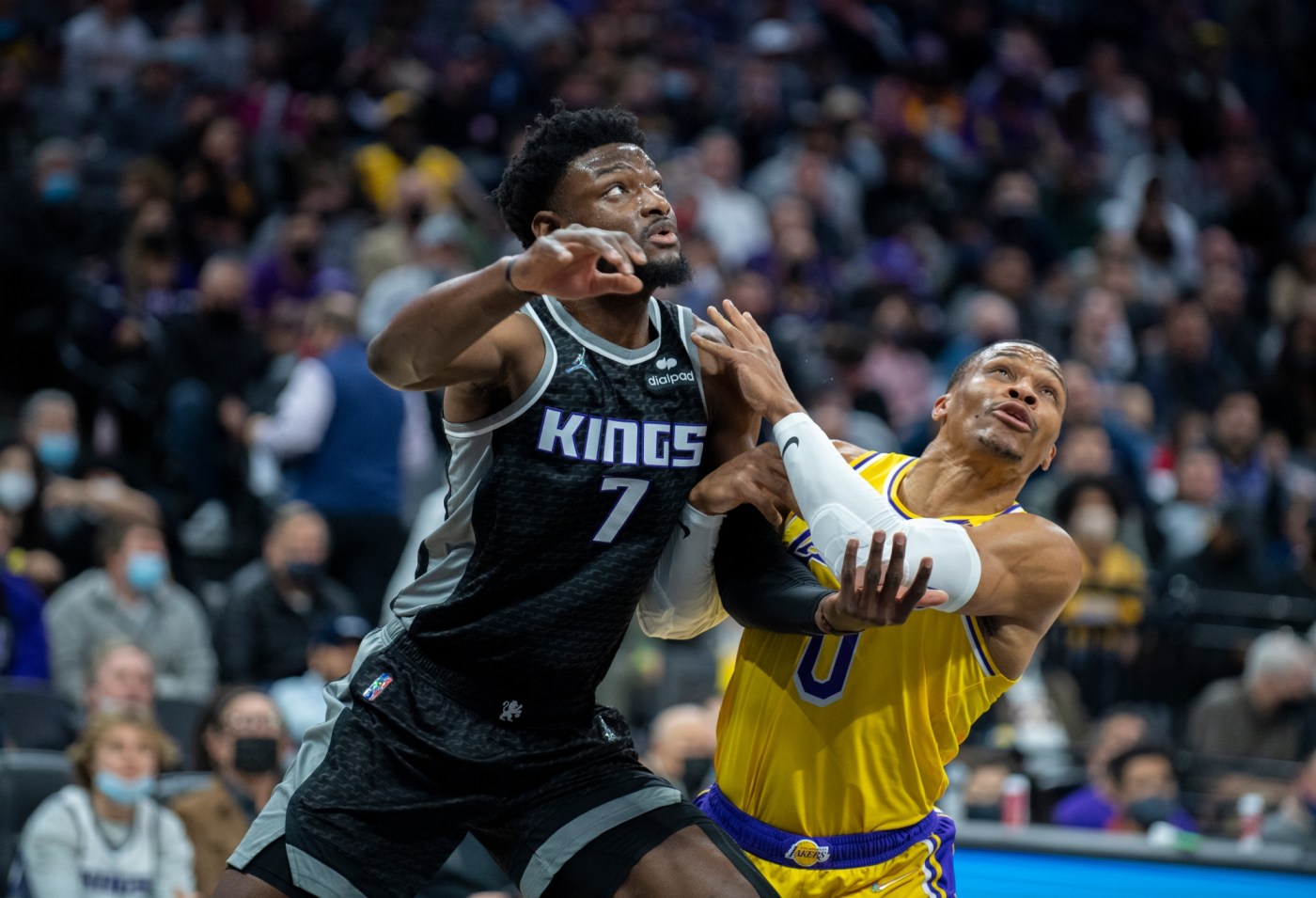 Weekly Reset: What can the Lakers use to make a trade?

Editor’s note: This is the Monday Jan. 17 edition of the Purple & Bold Lakers newsletter from reporter Kyle Goon. To receive the newsletter in your inbox, sign up here.

You can’t sum up the Lakers’ week any better than LeBron James did in his tweet on Sunday evening.

“#LakerNation I apologize and I promise we’ll be better!” he wrote.

#LakerNation I apologize and I promise we’ll be better!

Apologies are rare from James, but after this week, it’s self-explanatory:

The Lakers (21-22) are tied with the Minnesota Timberwolves at No. 7 in the Western Conference standings (Minnesota owns a 2-1 tiebreaker), 12.5 games behind the first-place Phoenix Suns (33-9).

HIGH POINT: With 2:19 left in the second quarter against Sacramento, LeBron James netted a 3-pointer from the top of the arc in Marvin Bagley III’s face. The Lakers led by 14 points, which was their biggest lead of the game and, unfortunately, the week.

LOW POINT: In a game that truly redefined “low point” for the Lakers, they were kicked around for the final three quarters against Denver, allowing Bones Hyland and Jeff Green to boat-race them. The 37-point margin of defeat was the worst of the season, and it’s the largest margin of victory that the Nuggets have ever had over the Lakers. Russell Westbrook called out his team for not playing hard. LeBron James didn’t speak publicly at all.

TRENDING TOPIC: We’re less than a month removed from the trade deadline (Feb. 10) and the Lakers’ performance is reaching the stage where fans are wondering what’s possible on the trade market. After doubting the Lakers’ ability to trade for Westbrook this summer, I’ve learned it’s best never to rule anything out, because surprising moves happen in the NBA. But a quick look at what the Lakers have in their coffers reveals how tight their options are in the quest to match 80% of whatever incoming salary they would take on (and substantially raise their tax bill):

– Talen Horton-Tucker, who is averaging 10.6 points per game with an effective field goal percentage (44.4%) lower than Westbrook’s. He’s 21 years old with good length and driving ability, but up through now, his ability to be either a helpful role player on a contender or a budding star is largely theoretical. He’s making $9.5 million this season.

– Kendrick Nunn, who has not played and still is in the individual workout stage of his rehab from a right knee bone bruise. The Lakers insist he’ll play a large role when he gets healthy, but he’s got a ton to prove. He’s making $5 million this season.

– Minimum contracts, which aren’t all that helpful except to get closer to matching salary. The veterans who are most expendable are DeAndre Jordan and Kent Bazemore, who have barely played recently.

It’s not a great collection to net top players who are expected to be on the trade market, such as Detroit’s Jerami Grant ($20 million this year) who Lakers fans seem ready to throw a welcoming parade tomorrow. It’s not nothing, but it’s not a good sign that every one of the Lakers’ most tradable assets is at least a little distressed. And for those on the “Trade Russ” bandwagon, at this point, it’s not a topic that merits discussion: There aren’t NBA teams clamoring to be on the line for Westbrook’s $47 million player option next year.

HEATING UP: There’s a temptation to say “no one” here, but Austin Reaves has pulled more than his weight recently. It was no more evident than his 19-point game against Sacramento, when he set a career-best scoring mark for the second time in two games. It’s actually now difficult to imagine the Lakers without Reaves as a scrappy (if skinny) defender, a heads-up cutter and good enough as a shooter to space the floor. The uncomfortable notion about Reaves is that he probably has value as a trade asset if the Lakers want to make a move for a more seasoned veteran, even though his sub-million-dollar salary barely helps the Lakers get anything interesting in return.

COOLING DOWN: Not a criticism per se, but more of an observation: Trevor Ariza is probably not as impactful a piece as the Lakers were once suggesting. He had an efficient week in two games, going 4 for 7 from 3-point land with eight rebounds and six assists. But the Lakers were outscored by a team-high 36 points in his 46 minutes which points to some of his struggles on the defensive end where he hasn’t been the fluid athlete that he was earlier in his career. Too often he plays on the passive side offensively. Ariza hasn’t helped the Lakers as much as once hoped as a spacing forward, but perhaps the hopes shouldn’t have been so high.

INJURY REPORT: The Lakers are supposed to give an update on Anthony Davis (left knee MCL sprain) early this week. He’s now missed 13 games, during which the Lakers are 5-8. ESPN reported that the Lakers are hopeful he’ll rejoin the team during the upcoming six-game road trip beginning on Friday in Orlando. It’s worth wondering how much urgency is added with the defense floundering without Davis available. Kendrick Nunn remains on the slow, slow comeback trail. Carmelo Anthony has missed two straight games with lower back soreness, which Frank Vogel called “day to day,” but has to be watched for the 37-year-old.

QUOTABLE: After weeks of either sidestepping or brushing past questions about his shooting, Russell Westbrook was refreshingly straightforward on Wednesday night when a reporter brought up the word “slump” after his 2 for 14 night: “Man, who you telling? I can’t make a (expletive) shot, boy.”

AHEAD OF THE CURVE: The biggest area that needs work for the Lakers is defense, and luckily for them they have games coming up against teams that are especially cold this month. Indiana is 23rd in offensive rating (108.2) and Orlando is 29th (102.9) in January; the teams have a combined record of 2-13 in 2022. The Jazz will be tricky, but their defense has been susceptible to attack recently (116.9 defensive rating in January). The hottest offense the Lakers will face this week is in Miami, where Erik Spoelstra has his squad matching the Phoenix Suns for offensive rating in 2022 (116.9), and Bam Adebayo may be back in the lineup for that game.

COMING UP (All times PT)

Editor’s note: Thanks for reading the Purple & Bold Lakers newsletter from reporter Kyle Goon. To receive the newsletter in your inbox, sign up here.

Weekly Reset: What can the Lakers use to make a trade?