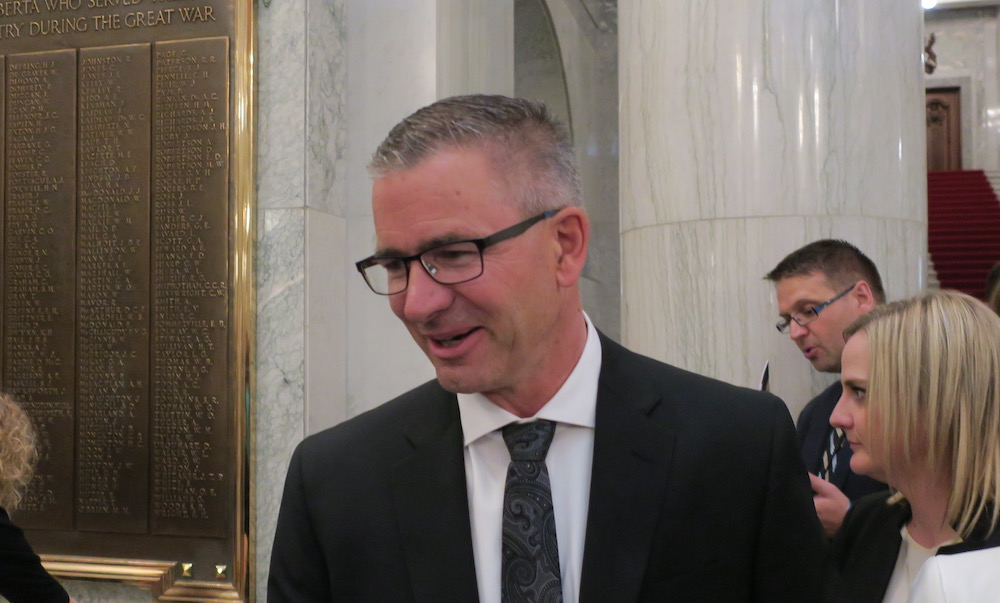 So, what did Travis Toews actually say about Assured Income for the Severely Handicapped when he said whatever he said to a Grande Prairie local news website one week ago today?

According to the first report on MyGrandePrairieNow.com, the finance minister, who is also MLA for Grande Prairie-Wapiti, said that the possible end to AISH benefits has been brought to the table, though nothing has yet been set in stone.

Unsurprisingly, that phrase, which was not in quotation marks in the story, sparked considerable outrage and concern as soon as a link to the report began circulating on social media.

Subsequently, the news site deleted the line from the story, substituting it with a note that the top that said: “The original version of this story included a misquoted statement about AISH from MLA Toews. We apologize for the error and the confusion. We have reached out to MLA Toews to clarify the matter.”

Not to be over-critical of a local news organization – the flaws in the story, including the omission of the circumstances in which Mr. Toews made his remark, are typical of news media in general nowadays – this clarification nevertheless does little to clarify and plenty to confuse.

If Mr. Toews was misquoted, why wasn’t the original statement in quotes? If the reporter’s paraphrase of whatever the minister said was in error, why hasn’t either the minister or the website clarified what he said? And if MyGrandePrairieNow felt the need to reach out to the local MLA to explain what he meant, where’s the explanation?

It seems likely the idea of putting an end to AISH benefits has indeed been brought to the table, whether or not Mr. Toews said anything about it to MyGrandePrairieNow.

After all, in late 2019, the Kenney Government de-indexed AISH payments, meaning they would no longer rise with inflation.

Last month, on Sept. 11, the normally pro-UCP Calgary Herald reported there is a plan within the United Conservative Party Government to shrink AISH payments. Yes, the Herald quoted an unnamed government official saying, “there is a push to potentially make some cuts,” and “they’re not going to be that minor in nature.”

Cutting monthly payments to the approximately 70,000 Albertans with disabilities who rely AISH for their basic needs was described by one person interviewed for the story as “absolutely inhumane,” a view many Albertans apparently shared. The report sparked an uproar that caused the government to back off a little.

A couple of days later, Community and Social Services Minister Rajan Sawhney responded to the anger by announcing there would be no AISH cuts after all.

Yet two days after that, Premier Jason Kenney told reporters instead of cutting benefits for all AISH recipients, the government would think about cutting some recipients off AISH entirely.

“The population of people qualifying has been growing far, far faster than the overall population,” the premier asserted, so his government would be looking at “what are the criteria, how do we define severely handicapped in this day and age?”

Taken together, all this could suggest last Monday’s MyGrandePrairieNow story was closer to the truth than the minister and local MLA wished to see in print before the UCP’s issues managers have a chance to manage our perceptions of the government’s plans.

It is entirely reasonable to believe that, given what we do know, the Kenney Government does intend to cut the money it spends supporting Alberta’s most vulnerable citizens – who are now living on just $1,685 a month.

Mr. Toews could clear the air by simply stating plainly what it is the government plans to do, or, if it hasn’t made up its mind, what the options are it’s considering.

One painless solution might be a modest corporate tax increase, since there’s plenty of evidence higher taxes don’t kill jobs and also lots that the UCP’s corporate tax cuts sure haven’t created any, and may even be financing corporate automation and relocation strategies that are making unemployment in Alberta even more severe.

Don’t expect anything like that to happen, though, while there are still people living on $20,220 a year who can be squeezed a little more.

Back in the day, Britain’s Private Eye Magazine, a scurrilous political and media gossip sheet printed fortnightly on greasy newsprint and read widely among the U.K.’s chattering classes, featured a regular column insulting classical musicians in general and the London Symphony Orchestra in particular by one Lunchtime O’Boulez.

For some reason this name from your blogger’s adolescent reading habits resurfaced last week with the publication of those lame Conservative Party of Canada social media memes introducing the party’s new leader, Erin O’Toole.

“Canada doesn’t need a poster boy,” the memes averred beside an unflatteringly pixilated image of Prime Minister Justin Trudeau. No, it continued, “Canada needs a handyman.” The latter statement was paired with a picture of a smiling Mr. O’Toole.

The response on social media, to say the least, was derisive, with many suggestions the Conservative strategic braintrust had best try again. (To be fair, this is preferable to Mr. O’Toole’s dogwhistly campaign slogan, “Take back Canada!”)

As soon as I saw the meme, though, I thought: “Lunchbox O’Toolez!”

And now, I’m afraid, that is how I will always think of Mr. O’Toole, at least until he goes down the unhappy trail broken by Andrew Scheer, and Jason Kenney finally gets his chance to return to his rightful place in Ottawa.