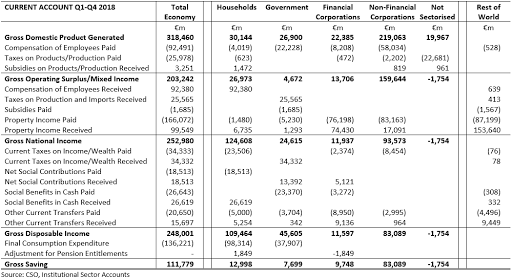 What do we do with €112 billion of annual savings?

Last week the CSO published the Q4 update of the (non-financial) Institutional Sector Accounts.  These are a great source of information on what is happening in the economy but are terribly difficult to navigate.
Here is a summary of the aggregated current account (Q1 to Q4 2018) by sector. Click to enlarge. 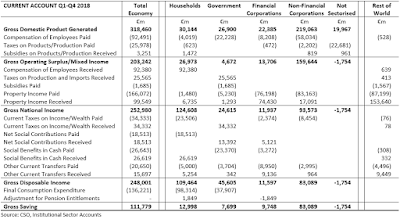 The starting point is the first estimate of nominal GDP for 2018 which is €318.5 billion.  Looking across by sector we can see where this is generated and the clear domination of the non-financial corporate sector in Ireland’s GDP figure (which in turn is dominated by foreign-owned MNCs). The final column gives the flows with the rest of the world. Figures in parenthesis are amounts paid by the relevant sector.
Deducting wages paid and adjusting for taxes paid and subsidies received on products and production gets us to Gross Operating Surplus/Mixed Income.  For the household sector, mixed income is a combination of the earnings of independent traders (the self-employed) and the rent that owner-occupied are imputed to pay themselves (this income is deducted as consumption later down the table so the bottom line is unchanged).  As with GDP, the main generator of GOS in the economy is the NFC sector.
Adding wages received, adjusting for taxes received and subsidies paid on products and production, and accounting for property income paid and received (mainly interest and dividends among others) gets is to Gross National Income.
The move from Gross National Income to Gross Disposable Income is done by adjusting for taxes and transfers.  Most of this are inter-sector flows with payments by one sector being receipts of another.  For example, income taxes paid by households and companies go to the government sector (some minor cross-border flows notwithstanding).
GDI is a couple of billion lower than GNI because of some cross-border transfer flows.  The rest of the world received about €5 billion more under "Other Current Transfers" from Ireland than Ireland receives from abroad under this heading - €9.5 billion out versus €4.5 billion in.
Some of this has to do with Ireland’s foreign-aid budget and other transfers.  A large part of it is made up of Ireland’s contribution to the EU budget but it should be noted that earlier in the table the €1.6 billion of "Subsides Paid" from the rest of the word mainly come from the EU and these make up the bulk of the €1.5 billion of "Subsidies Received" by the household sector (agriculture).
Anyway, by this point we have a total economy Gross Disposable Income of €248 billion, of which we use “only" €136 billion on consumption.  That leaves us with Gross Savings of €112 billion and the breakdown by sector can be seen in the bottom row.
To see what we did with this we turn to the capital account.  Again click to enlarge.

The first panel of the table gives the change in net worth by taking into account capital taxes and transfers and consumption of fixed capital (depreciation on existing assets).
The second panel shows what happened to gross savings and it can be seen that we did €82.8 billion of gross capital formation on produced capital assets and had net purchases of €22.5 billion of non-produced assets (such as marketing assets and customer lists).  That left the economy in a net lending position of €6.6 billion for 2018 (with this €6.6 billion being borrowed by the rest of the world).
The continued deleveraging of the household sector is evident in its net lending position of €5.5 billion.  This will have been, in part, used to repay debt and the household sector has significantly reduced its outstanding debt over the past decade.  The government sector had close to a balanced position in 2018 so, unlike the household sector, did not have a surplus to reduce its debt.
The big figures are again in the NFC sector with €83 billion of Gross Savings fully offset by €62 billion of investment in produced capital assets (gross capital formation) and €22 billion of net acquisitions of non-produced assets giving a net borrowing position of €1 billion.
This relatively modest outcome at an aggregate level probably belies significant changes within the sector.  It is highly unlikely that the companies with the €83 billion of Gross Savings were the companies that invested €84 billion in assets.  The companies with the savings would have used that to reduce their debts (built up when acquiring assets, including intangible assets, in earlier years) while those acquiring assets in 2018 would have funded that by new borrowing of their own.  So while the accounts might show €112 billion of Gross Savings most of it is the result of MNC activities and is not ours to spend.
It is probably a little more than a coincidence that the numbers in the NFC sector were so close in 2018 giving a net outcome of "just" minus €1 billion.  And, it should be noted, that these are just the first estimates.  Things could be very different when the National Income and Expenditure results are published during the summer.  We saw this for the 2015 results though such changes are largely limited to the NFC sector.
The previous compositional issue is also true for the household sector, though on a smaller scale.  While the household sector had net lending of €5.5 billion, repayments against existing debt would have been much larger than this, possibly twice as large.  Those in the household sector who undertook investment (which is mainly on houses) could have funded this with new borrowing.  The balance of repayments on existing debt and new borrowing for investment gives the overall net lending position of €5.5 billion.
This is a Gross Saving that is ours to spend.  Eventually the deleveraging will stop.  Whether that leads to an increase in consumption or investment is hard to tell.  The vulnerable position of the government sector probably means that some caution in the household sector is warranted but whether this caution will persist remains to be seen.

What do we do with €112 billion of annual savings?