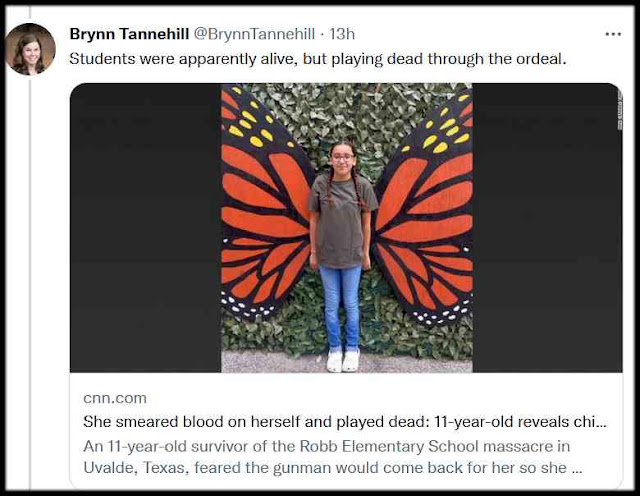 What Happened in Uvalde is Why the Police Should Be Defunded

While a Gunman was Killing 19 children and their teachers in Ulvade Texan Police Handcuffed, Pepper Sprayed and Tasered the Parents Instead!

If ever there was a demonstration as to why the Police should be defunded, it was on display in Uvalde, Texas. Heavily armed Police stood outside the classroom where the gunman was murdering defenceless children because they didn’t have a key to the door!

They apparently believed all the children were dead but didn’t have the courage to find out for themselves if anyone was alive. It has taken a tragedy like Uvalde to demonstrate that the Police aren’t there to protect people but to protect property.

Heavily armed police refused to go into the school and instead saw their job as harassing and persecuting desperate parents. One parent, Angeli Rose Gomez, was handcuffed. When freed she jumped the fence and went in to rescue her child whilst these heavily armed cowards stood outside, pepper spraying and tasering distraught parents.

40% of Uvalde’s budget was spent on these entitled cowards. They should not only be sacked but prosecuted for gross negligence manslaughter. But of course they won’t because the Supreme Court has given them virtual immunity.

Of course when it comes to shooting an unarmed Black kid then these heroes will rise to the challenge but otherwise they are useless. Ulvade doubled the amount it was spending in one year on providing school security but the killer still ran past police and armed guards. Indeed he was outside for 12 minutes shooting but no one had the gall to tackle him.

He posted what he was intending to do on Fuckerberg’s Facebook but the Moderators, who are so quick to uphold ‘community standards’ when it comes to supporting the Palestinians saw nothing.

If nothing else this shows that there is a need for a different, community model of policing. If the parents had had the guns that the Police had then the gunman would have been neutralised far earlier. We need to get away from the idea that we need separate groups of Police to protect us.  The Police have as their priority the defence of the wealthy and property not people. 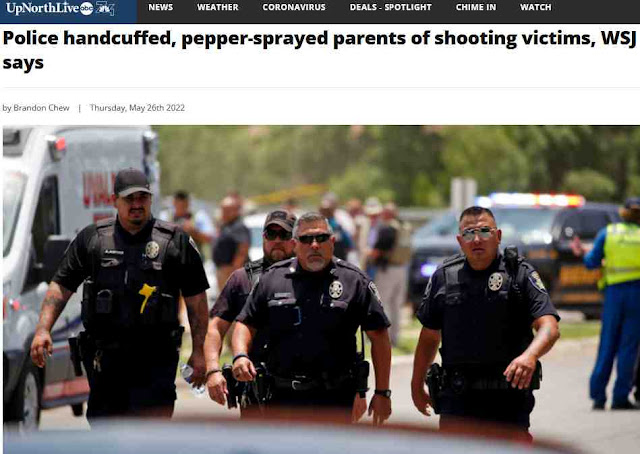 Meanwhile the far-Right Governor of Texas, Greg Abbot, pontificated about ‘evil’ stalking the land. Clearly he was not in possession of a mirror because it is Abbott who represents evil. Abbot blamed the murder of 19 children and 2 teachers on mental illness and virtually anything but himself and the armed goons who saw attacking the parents as more important than tackling a lone gunman. 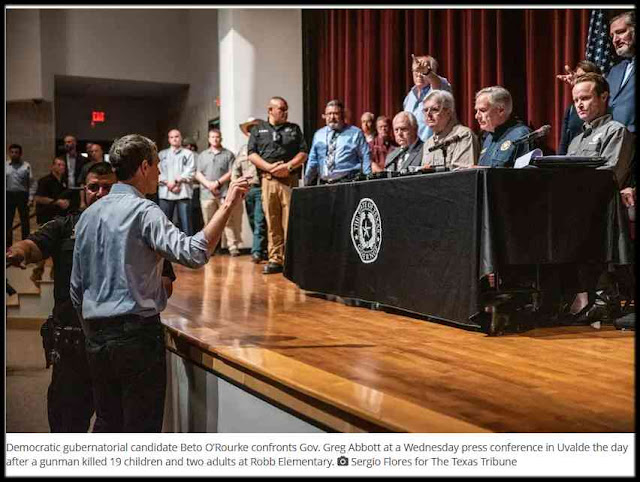 His Democratic opponent Beto O’Rourke confronted Abbot over his do nothing approach. Of course Abbot is an easy target. He opposes gun control on principle. Abbot is a particularly vile creature. But it is easy to fall back on the panacea of gun control.

Norway has a very high rate of gun ownership and yet despite the USA having 50 times the population of Norway it has 10,000 times the murder rate. The reasons for the high rate of gun crime in the USA and in particular this phenomenon of shooting children in schools can’t simply be explained by lack of gun control. 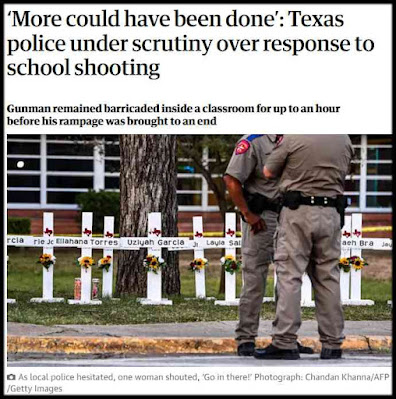 The fact is that as a settler-colonial society which recently had slavery, the US is an endemically violent society. It is the only Western state that has the death penalty. To this day the USA maintains a concentration camps in Guantanamo. It has the highest rate of incarceration, some 2 million prisoners, some of whom are kept in conditions that amount to torture. Super-max prisons where inmates are kept in shackles and solitary confinement. 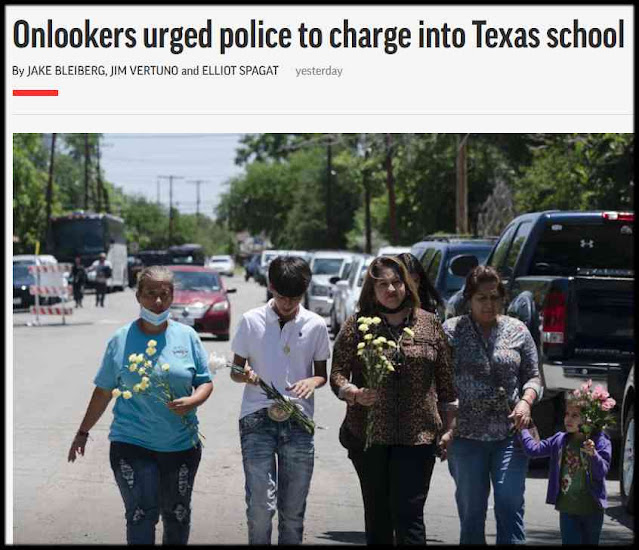 The US is responsible for a phenomenal amount of violence around the world, from Iraq to Afghanistan to Israel. The CIA has been given a license to torture and the US even has a training school for torturers and death squads, the School of the Americas which is now renamed the Institute for Security Cooperation.

If Israel maintains a violent occupation it does so courtesy of US weapons and subsidies. At the moment the US is doing its best to encourage a genocidal war in Ukrainian by supplying it with limitless weapons. The US is the world’s major arms supplier.  The US is the prime factor in violence in the world. Is it any wonder that US violence abroad is imported back home? 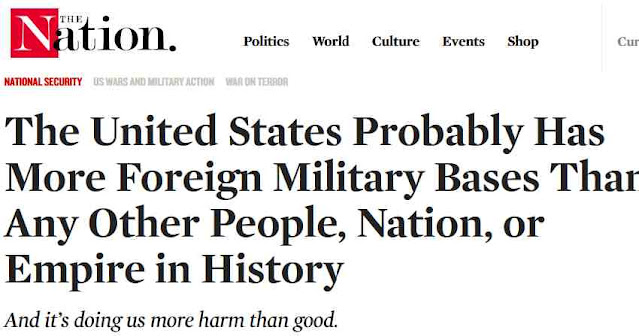 The US is of course a massively unequal society and the purpose of the Police is to keep it that way. Inequality breeds violence. The US can’t afford a national health service but it can afford 800 foreign bases and at spends at least $750 billion on its armed forces. It spends more than the next 9 countries put together on its military. 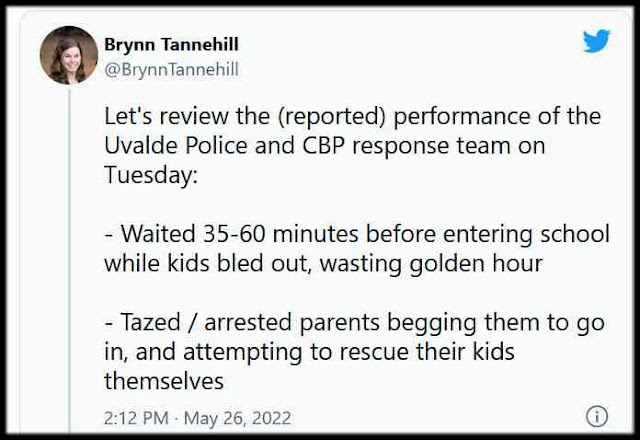 Why should anyone be surprised when this makes some people mentally ill enough to want to kill American kids? After all the US army has been killing children for years in its Drone Wars without any comeback. 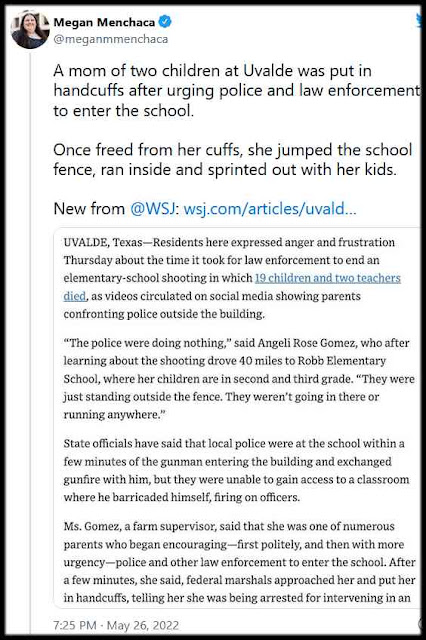 The idea that gun control by itself can solve the problem of internal violence is a pipedream sown by the Democrats who, as the Ukraine war has proven, are worse imperialists than the Republicans. In Congress it was 57 Republicans who opposed the $40 billion to Ukrainian neo-Nazis. In the Senate it was 11 Republican Senators who voted against.

Not one Democrat in Congress – not Sanders, not AOC, not Ilhan Omar or Rashida Tlaib voted against supplying the Azov Battalion with nice, shiny new US weaponry.

It is a tragedy that 19 children and their teachers died in Texas but no one should be fooled that gun control by itself that will be the remedy.  The United States is a violent society and violence begets violence.

What Happened in Uvalde is Why the Police Should Be Defunded