What is Behind the Metaverse Boom?

The metaverse, a concept referring to a shared virtual environment that people access via the Internet, has become one of the hottest business trends this year, building on the accelerated shift to digital channels, growth of the augmented reality/virtual reality (AR/VR) market, and advances in blockchain technology and cryptocurrencies.

A new report by DBS Bank looks into the booming trend, highlighting the key drivers of the metaverse and the firms leading the trend.

According to the report, the rise of digitalization brought about the COVID-19 pandemic, the shift to remote working, and the development of the so-called Internet of Senses (IoS) are changing the world of work and setting the foundation for the metaverse to infiltrate the workspace.

The IoS is a term coined by Ericsson that proposes the idea of a full sensory immersion in the virtual space to include taste, touch and smell. A study by the firm found high consumer interest in the concept with 81% of the urban early adopters sharing openness to the idea of the IoS.

In tandem, the VR/AR market has witnessed strong growth, building on adoption from both consumers and enterprises in the gaming space.

VR/AR hardware and equipment are fundamental components and key drivers of the metaverse since they allow for experiences in the metaverse to be immersive and interactive.

Global market consultancy International Data Corporation (IDC) estimates that a total of 2.2 million AR and VR headsets were shipped globally during Q2 2021, skyrocketing by 126.8% compared with the same period last year. VR shipments will reach 8.4 million units, a figure set to balloon to 26.7 million shipments by the end of 2025. 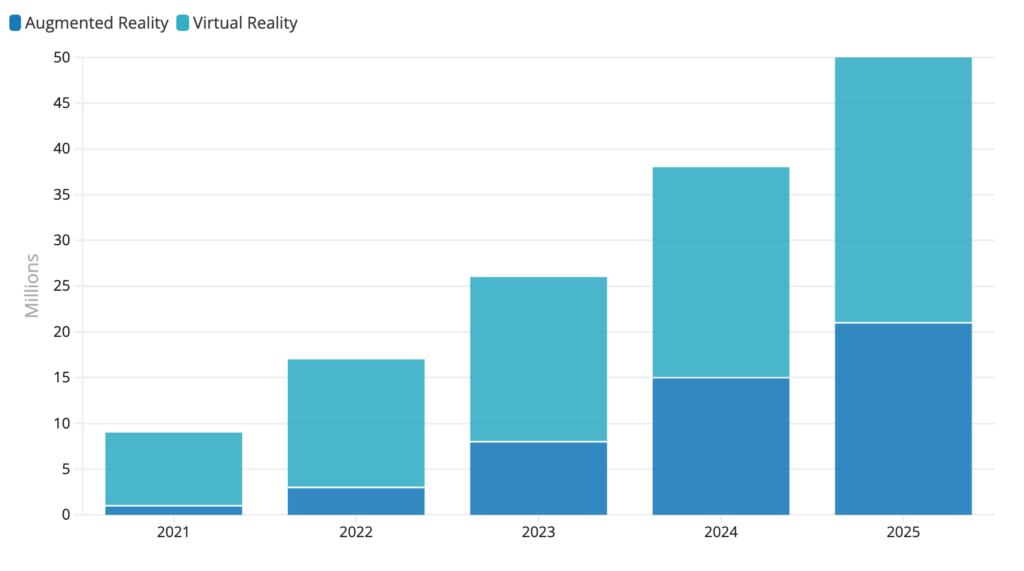 Finally, blockchain technology and digital assets are providing means for people to transact in a virtual environment. In the metaverse, people could use cryptocurrencies to buy virtual goods and services in an efficient and seamless manner, while non-fungible tokens (NFTs) would provide them with the technology to tokenize any type of virtual asset, facilitating thus ownership and transactions.

NFTs are unique, non-divisible, and non-interchangeable units of data stored on a blockchain. They have surged in popularity this year, with sales reaching US$2.5 billion in H1 2021, up from just US$13.7 million in H1 2020, according to a Reuters report citing data from crypto analytics platform DappRadar.

Although these are still early days for the metaverse, companies of all sizes and from all sectors are investing in the concept, but according to DBS Bank, bigtechs, gaming developers and infrastructure providers and hardware manufacturers are the ones who will be the big winners.

Game engines will play a key role in the metaverse since they are literally the ones crafting that virtual world.

Key players in the space include Unity Software, Unreal Engine and Roblox. Unity Software is the one public-listed game engine company. Over 50% of the top games players across all platforms are made with its software. Roblox is a gaming platform that allows users to create games and build communities. It has more than 40 million games, 9.5 million developers and 47.3 million average daily active users.

Meanwhile, bigtechs, including Facebook and Microsoft, are in a unique position to capitalize on the metaverse trend, thanks to their huge cash reserves, access to the best talent, and cutting-edge technology, the report says.

Several of them have already started making moves. In October, Facebook announced its rebranding to Meta Platforms, a move aimed at broadening its reach beyond social into areas including VR, and the larger metaverse.

Microsoft is adapting its signature software products to create a corporate version of the metaverse. The first offering, a version of Microsoft’s Teams chart and conferencing program, will let businesses create immersive spaces where workers can meet. The technology will use Mesh, a software announced earlier this year that enables AR and VR experiences using headsets, and will be available in H1 2022.

In China, Internet giant Tencent registered trademarks in September for Timi Metaverse and Kings Metaverse, but has not yet publicly announced plans. Tencent’s ecosystem spans gaming, virtual offices and mobile payments and the company has strategic partnerships with the likes of Epic Games and Roblox’s gaming platform.

Finally, infrastructure providers and hardware manufacturers such as Fastly, a cloud computing services provider, and Nvidia, a computer chip manufacturer and technology company, will be supplying the products and services that are essential for “the great migration into the metaverse,” making their role critical in the metaverse, the report says.

The post What is Behind the Metaverse Boom? appeared first on Fintech Singapore.

What is Behind the Metaverse Boom?