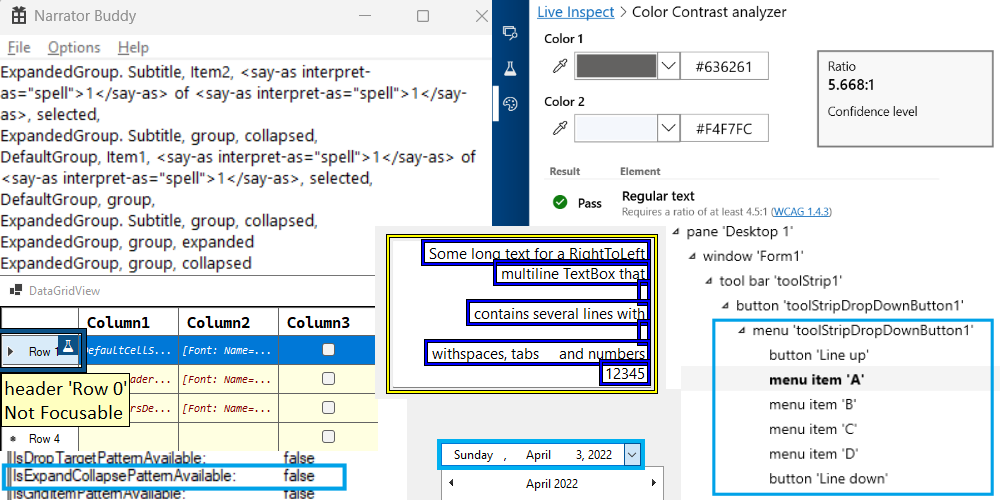 There are a lot of exciting enhancements for Windows Forms developers in .NET 7. We are committed to support and innovate in the Windows Forms runtime, so let’s look at what is new in .NET 7.

We strive to improve the experience for users of assistive technology. This release adds further improvements to accessibility, including but not limited to the following:

Throughout the .NET 7 release we continued our work on improving the high DPI support in multi-monitor scenarios (that is, PerMonitorV2). Most notably, the Windows Forms runtime now can:

The progress is slow because any changes in the layout engine carry a very high risk. To help reduce the risk we have (re-)introduced “feature switches” back into Windows Forms runtime. This will allow us to add new features and functionality with an escape plan, if those don’t work out for our developers.

In .NET 7 we added the first switch System.Windows.Forms.ScaleTopLevelFormMinMaxSizeForDpi that controls whether the form’s MaximumSize and MinimumSize properties are scaled whenever WM_DPICHANGED message is received.

In .NET 7 the new scaling behaviour is disabled by default, but in .NET 8 it will be on by default. The switch can be configured via runtimeconfig.json like so:

We want to help Windows Forms developers to modernize their existing apps and to adopt new cloud-based technologies. One way to modernize is the ability to move business logic of a typical line-of-business (LOB) application away from the Windows Forms code-behind pattern towards more modern patterns like Model-View-ViewModel (MVVM), which can be easily reused and tested. We also wanted to provide an incentive to pivot away from the 15-year-old Typed DataSets. They have very limited support in the Windows Forms out-of-process designer because Visual Studio no longer supports Data Source Provider Service for the .NET runtime. The feedback to the proposed new Binding strategy was very positive and indicated that we’re on the right track with that.

Windows Forms already had a powerful binding engine, but to achieve the above goals we introduced support for a more modern form of data binding with data contexts and command patterns, similar to data binding provided by WPF. 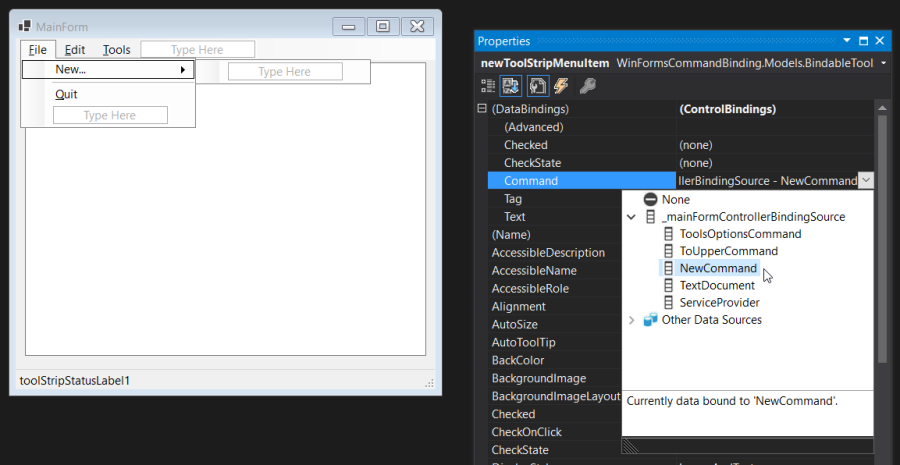 The new API surface is as follows:

The new data binding features allows you to fully embrace the MVVM pattern and the use of object-relational mappers from ViewModels in Windows Forms much easier than before. This, in turn, makes it possible to reduce code in the code-behind files, and opens new testing possibilities. More importantly, it enables code share between Windows Forms and other .NET GUI frameworks such as WPF, UWP/WinUI and MAUI. (To preempt any questions, there are no plans to introduce support for XAML into Windows Forms.)

It’s important to add that these new binding features are only available under “preview” status in .NET 7, so that we can react to developer feedback and tweak the binding during the .NET 8 development cycle. We expect that the new binding functionality will become generally available in .NET 8.

In .NET 7 as part of a wider experiment we replaced the selected Windows Forms built-in COM interops with ComWrappers.

– What’s the difference? – you may ask. Mostly it’s that the built-in COM gets completely disabled in trimming/native AOT scenarios. That was one of the reasons why trimming was disabled for Windows Forms in .NET 5.

– Why does this matter for Windows Forms which disables trimming during dotnet publish step? – you may ask again. Even if trimming is disabled it still works, and the migration work allows for further experiments. As an example, it greatly simplifies the ability to run code in native AOT without additional customizations. In addition, if you provide a global ComWrappers implementation for the missing accessibility COM objects, you could run a Windows Forms application under native AOT.

:warning: This work is still highly experimental, and some scenarios are rough and require manual work. Mostly this comes from the native AOT limitations and trimming quirks. Please keep in mind that you need to test your application after you publish.

If you feel adventurous and wish to experiment or just like to know more about ComWrappers and native AOT for Windows Forms, see @kant2002‘s post on Medium “Again WinForms and NativeAOT” and his GitHub repository.

In no particular order:

And we have some very cool new UI integration tests as a direct result of some of these changes.

While we intend to maintain backward compatibility with .NET Framework and previous .NET releases as much as possible, it is not always prudent. Follow the link to see the list of breaking changes.

The community continues to play an important part in the life of Windows Forms runtime and the SDK. In .NET 7 timeframe we have merged over 700 pull requests (excluding the automated pull requests) in dotnet/winforms repository with almost 60% of those pull requests authored by the community. All these contributions – big and small – are really appreciated.

We’d like to call out a few community contributors:

We are committed to providing the complete support for PerMonitorV2 mode. We will continue to work on the scaling-related issues (e.g., dotnet/winforms#7973). We’re also working on a new layout and anchor calculation mechanisms, which are not only expected to address the anchoring issues but should also deliver performance improvements. You can learn more about the new achor layout at dotnet/winforms#7956. In addition, we’ve been considering how we can improve the designer-related developer experience in this area.

We are also set to continue our modernization journey and to closer align our functionality with Windows. We have started replacing our manually created interop code with the source-generated interops produced by CsWin32 project. This not only reduces the maintenance burden for the team, but also opens up new possibilities (e.g., support Windows 11 dark mode). We also expect that it may help advancing the trimming and the native AOT stories.

Furthermore, we will continue our work to migrate built-in COM to ComWrapper and bypass the .NET COM interop layer, where possible. And, hopefully, next time around, we will have a significantly better story for self-contained, single-file Windows Forms applications.

We also consider API proposals that further enrich Windows Forms SDK and make it easier to build Windows applications. And if you champion a proposal – there is a high chance that you will see it in the Windows Forms SDK.

You can also become a contributor to the Windows Forms code base! Our repository has items marked “help wanted” and API approved for implementation, we would really appreciate your help implementing them!