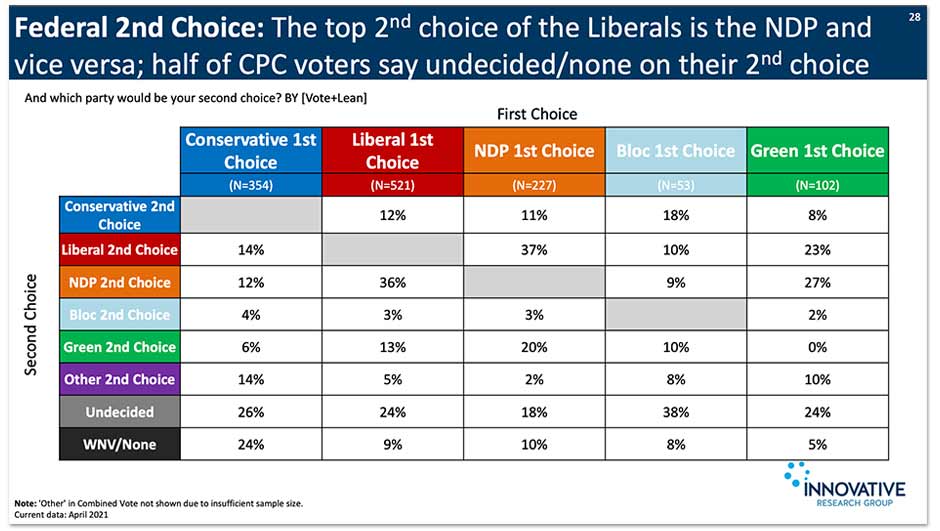 Now the Liberals are on a new path as they search for an election majority – and that path will likely lead to continued policy skirmishes between the Liberals and NDP.

Since the mid-2000s, the deciding dynamic of federal politics has been the fight between New Democrats and Liberals. There was the orange wave of 2011. The red tide of 2015. And during the pandemic recession, the greatest tension has been due to NDP demands on the governing Liberals for more and faster help to Canadians.

This central dynamic of federal politics has recently been disguised by the second-place position of the Conservatives.

And that analogy goes a long way to understanding why, almost 30 years after the NDP first promised it and 50 years after it was first recommended, the NDP’s 2019 campaign pledge of $10 a day childcare is now on the agenda with the federal Liberals.

A recent poll from Innovative Research Group confirms what almost all other polls for months have shown. The Liberals lead with the Conservatives in second and the NDP third. But a deeper dig into the data shows why the Liberals’ largest fear is losing support to the NDP, not the Conservatives.

Despite a decrease overall approval and pandemic approval hitting a record low, the federal Liberals are maintaining their strong lead on vote choice at 35%, leading the CPC by 11 pts. Includes a strong lead in ON, and a lead in every economic gap segment. https://t.co/9muUjHMXmg pic.twitter.com/I6u78eh2tO

And that alone goes half-way to explaining the Liberals’ rediscovered commitment to childcare.

According to the IRG survey, only 12% of current Liberal supporters said their second choice was the Conservatives.

But the pool of possible Liberal-NDP switchers is three times larger. According to IRG’s data, 36% of Liberal supporters said if they switched to their second choice, they’d be voting for Singh’s NDP.

The market-leading company in our analogy would surely worry more about the competitor – even if it was smaller – that could walk away with 36% of its customers, rather than a bigger one that could only take 12% of them.

The Liberals real adversary is the New Democrats. And in that fight, the Liberals have a distinct advantage – they are already ahead, and not by a small amount.
Political parties often use contrast to push voters to make choices.

In response to the budget the New Democrats have been pushing contrasts between themselves and the Liberals on a wealth tax on the ultra-rich, pharmacare and non-profit long-term care. Clearly, when push comes to even the smallest shove against the ultra-rich and politically-connected industries, there are places Liberals won’t go to appeal to NDP supporters. Without doubt, Singh’s party will probe those places with sharp contrasts to push swing voters to pick a side.

But the situation is different for the poll-leading Liberals. Mostly, they don’t want voters to make choices – they want them to stay where they are. Rather than contrast with the NDP, which might polarize switchers, sending some to the NDP, the Liberals are dulling down contrasts and projecting sameness. In their childcare gambit, they’ve even gone as far as to lift a central feature of the NDP’s plan: Its $10 per day price tag.

Affordable, accessible child care is one of the biggest factors in reducing the gender wage gap – it’s just the right thing to do for families.

The Liberals have been promising child care for 26 years.

We’re actually going to get it done with universal child care. #elxn43 pic.twitter.com/0AUtDnZMP4

This is the first half of the explanation for the Liberal’s childcare manoeuvre. But there’s another half that explains why childcare is the tactic, and not some other policy push.

While the IRG poll doesn’t report on demographic differences, an Abacus poll released Thursday does: younger women are a key constituency for both the Liberals and NDP.

Due to weak Conservative support, the Liberals have been forced to skirmish with the NDP over policy. In childcare, Liberals are pitching to a key swing demographic, hoping it will do what the old tactic of strategic voting now can’t.