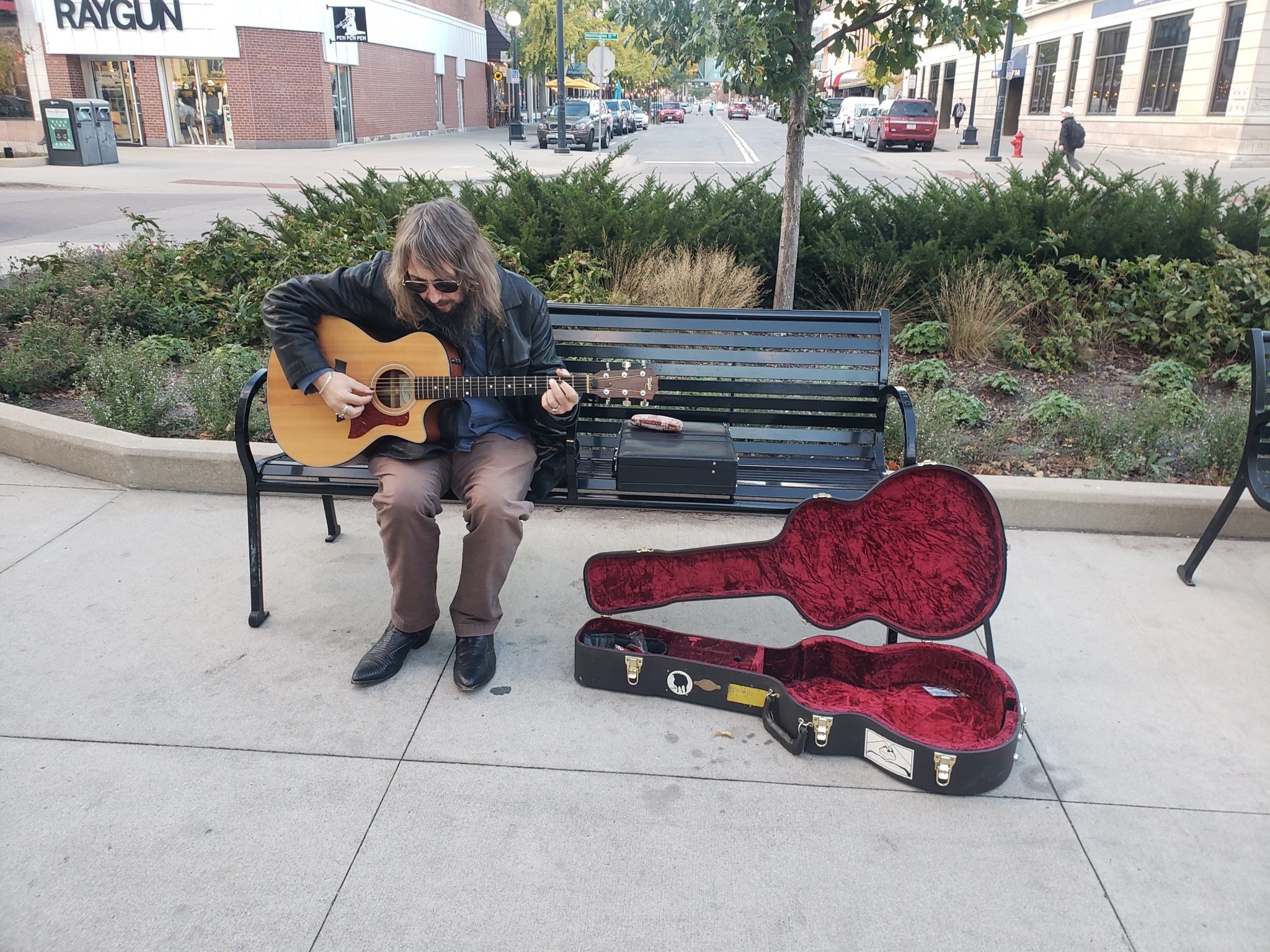 What the Street Musician Told Me about Simplicity

I watched from a distance while also being deeply invested in my cup of vanilla froyo. People would come in droves as the city streets echoed to greet its nightly friends. People pounded the sidewalk with their feet as they passed by him, and some might even drop a penny with a thump as it found a plush velvet resting place. Many continued on though, some focused on what her friend just said about her boyfriend, or about how they need to borrow someone’s fake to join their friends at the bar.

Yet I sat still, until I gained the courage to ask the street musician how he came to be here.

Underneath a pair of pink heart shaped specs, a crooked smile greeted me. Weathered hands cradled a glossy guitar. Black nail polish, with one nail adorned in a glittery gold, started to blur, as his fingers and the guitar strings yearned to come back to one another after each strum. Black boots greeted the concrete from heel to toe, as the beat pulsed against the sidewalk. The streetlights dashed across the surface of his guitar named Sara.

Michael Link, a street musician in a city home to the college scene, told me about his life as the windy night that surrounded us threatened to carry his words away.

He was excited to tell me his story when I approached him, and he told me his story through his music. It was a story set to strumming, and all the songs were his. The songs reminded me of reading my favorite books. With every page turn, my curiosity would grow. I constantly wondered how the story would end. Every strum would grow in intensity as his voice matched this rising progression. His voice seemed like it was calling out to the passerby. Then the song would quickly come to an end with a few steady strums.

He detailed to me, a lifestyle of music that carried a melody amidst the cacophony of the city’s noise. This was what he lived for. He lives a lifestyle seemingly stripped of necessities and has less than I, but is more content than I feel. Losing my student ID that day and feeling overwhelmed by all the homework that clung to my side in my backpack, all contributed to my gray and dismal day. Yet a man who seemingly lives a life in absence of what most think life should contain, found solace in the simplicity of his craft. His music was his home and his safe place.

He didn’t need the pity of others to cloud his simplistic love.

Michael preferred that people only like his music rather than give him a pity consolation prize of the change in their pocket. He only wanted people’s money if it was because they admired his work. During the beginning of his music career on the streets, he said he tried to look like he wasn’t homeless so that people would not give him money because they pitied him but because they liked his music.

He was simple in what he loved and what he hated, and this felt refreshing to me. Michael allowed for reality in his life, but he didn’t allow his situation to dull his dreams. With only a guitar and his voice, he’s justified in his goals. He never complained about a lack of means.

Michael showed me how his life made his talents clear alongside the obstacles he faced.

Life for me as a college student always felt cluttered but simplicity now seems to be the key to relieving my stress. Instead of complaining about my situation, I need to realize that my life is in my hands, and college is a part of figuring out what kind of life I want. College is a process in which you fight with yourself and your habits until you find clarity. So instead of wrestling with all the noise, I’ll find perspective through the street musician’s pink-hearted specs and find content in my own melody.

The post What the Street Musician Told Me about Simplicity appeared first on College Magazine.

What the Street Musician Told Me about Simplicity