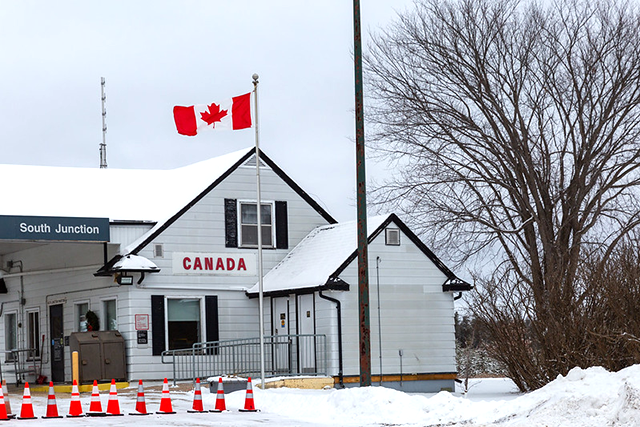 What we know about illegal border crossings into the U.S. from Canada

Last week, Canadian authorities announced the discovery of the bodies of four family members — two adults, a teenager and a baby, all citizens of India — who authorities believe died of exposure trying to cross from Canada to the U.S.

The discovery of people who died crossing the border is far more common along the U.S.’s other border — the one with Mexico. For one thing, far more people attempt to cross that border. Along the U.S.-Mexico border, U.S. Border Patrol encountered more than 1.6 million migrants in 2021 according to data from U.S. Customs and Border Protection (CBP). The International Organization for Migration, a humanitarian organization, estimates at least 65o people died trying to cross the southern border in 2021.

Though it’s a less-common route for migrants, data show hundreds of people are caught attempting to cross the northern border into the U.S. every year, dozens of them into Minnesota.

It’s hard to get a complete picture of the number of people crossing the border illegally, since many border crossers work to avoid detection. The data that do exist come from U.S. Customs and Border Patrol, and only cover people who are apprehended and/or expelled by the agency — something less than the total number of crossers. (Migrants who enter the U.S. have the opportunity to make an asylum claim. But since the start of the pandemic, a policy initiated by the Trump administration and continued by the Biden administration has expelled migrants if they pose a risk of bringing a communicable disease to the country. Many have been expelled without the opportunity to make an asylum claim.)

By this measure, northern border crossings were actually way down last year. Data show the Border Patrol apprehended or expelled 916 migrants along the U.S.-Canada border in the 2021 fiscal year, down from 2,155 in 2020 (all CBP data shown are in federal fiscal years, which run from October through September).

Data show fewer people are caught crossing the border in Upper Midwest jurisdictions than on the coasts. Of the 916 Border Patrol encounters last year, 90 were within the jurisdiction of the Grand Forks Border Patrol sector, which includes 861 miles of border, more than half of it water, crossing Minnesota and North Dakota. Thirty-two of the encounters were in Minnesota.

Border Patrol apprehensions and expulsions along the U.S. northern border by sector for FY 2021
Source: U.S. Customs and Border Protection

“It’s not the most common but it is desolate, and it’s wide open and not heavily patrolled,” Theresa Cardinal Brown, the managing director of immigration and cross-border policy at the Bipartisan Policy Center, said of the border near Minnesota and North Dakota.

Just as the southern border can be dangerous due to heat, the northern border presents extreme dangers in the winter due to cold. Canadian officials said the family found dead was exposed to temperature and windchill equivalent to -31 degrees Fahrenheit.

As for nationality, of the people the Grand Forks sector encountered in 2021, the most common citizenship was Mexican, followed by Romanian and Honduran.

Late last week, a Florida man was charged with smuggling in the case of the Indian citizens. Seven people were found alive in the U.S. in addition to the family of four found dead over the border. Court documents claim one of the people paid a significant sum to get into Canada using a fake student visa, the Associated Press reported.

And migration across the U.S.-Canada border goes both ways. In fact, far more people were coming from the U.S. into Canada during the Trump administration, particularly with the former president’s rhetoric around immigration, said Emily Gilbert, a professor who specializes in citizenship and borders at the University of Toronto.

One reason people may try to cross the border undetected is because of a post-9/11 agreement between the U.S. and Canada that requires people to claim asylum in the first of the two countries they enter.

“You can only make an asylum claim in the first of the two countries that you arrive in. So if you arrive in Canada first because that’s your pathway … you’re supposed to make your claim in Canada and you’re not then allowed to go and make a claim in the United States,” she said. “This really impacts a lot of the undocumented people who are coming [to Canada] from South America, Central America and Mexico because, coming by land, obviously the first country of arrival is going to be the United States, which means for those people, it’s almost impossible for them to make a claim in Canada unless they cross the border in an illegitimate way.”

As for why people would be seeking to come to the U.S. instead of staying in Canada when both countries have asylum, Gilbert said it can depend on why people are seeking asylum. While both the U.S. and Canada have signed on to U.N. refugee conventions, Canada tends to be more open to claims from people persecuted for LGBTQ reasons and for domestic violence claims.

It can also have a lot to do with where the people seeking to come to the U.S. have family and community.

“One reason why people [might try] to find their way to Canada and then make their way down to the United States is because they have extended family, more of a sense of community or other kinds of things that would pull them across one border, as opposed to the other.”

What we know about illegal border crossings into the U.S. from Canada