The Brady Bunch Movie – From 1995, this was essentially an affectionate parody and a culture clash. It’s along the same lines as the two Addams Family movies from the era, as it places a sitcom family from an earlier time in the modern day, where they’re the same (mostly), but everyone else is different. While the Addamses were always weird, though, I think the Bradys were at least supposed to be pretty normal within the context of the show, while here they’re the odd people out in the greedy, cynical, mean culture of the nineties. Now that I think about it, the Bradys were able to totally ignore the Nixon administration and Vietnam War back in their original time, which I guess was the privilege of a white middle-class family. The movie combines the plots of several episodes with an ongoing story about the family having to find money for an overlooked property tax bill in order to keep their house. Most of what the Bradys do in the film is based on the show but generally exaggerated for comic effect. For instance, there was an episode where the family square danced and had a potato sack race, but it was part of a themed party, not something they necessarily did often. And while several plots focused on Jan feeling overlooked, she was never the put-upon loser she was here. 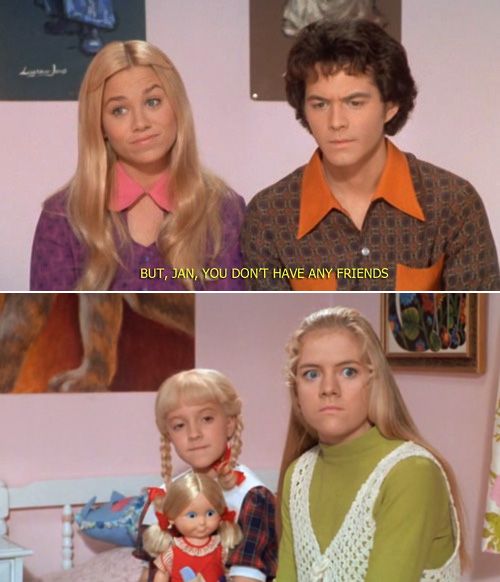 But while it deconstructs and makes fun of the show, it also presents the Brady family as a force for good in a rather bleak world. Davy Jones sings a version of “Girl” with grunge instrumentation, and Micky Dolenz and Peter Tork make cameo appearances. So do most of the original cast, although Eve Plumb refused and Mike Lookinland and Susan Olsen’s scenes were cut.

A Very Brady Sequel – This came out the following year, and while there are still jokes about the clash between the Bradys and the rest of the world (and no explanation as to how this version of the family would have grown up obsessed with the seventies when some of them weren’t even born then, because it’s not that sort of movie), it’s less of a focus because the plot is more contained. It deals with some more obscure elements of the show’s mythology. There was never any official explanation as to what happened to Mike and Carol’s previous spouses. Sherwood Schwartz’s idea was that Mike was a widower and Carol a divorcee, but it was never used. Here, Carol’s previous husband is an adventuring archaeologist who was lost at sea, and a guy shows up claiming to be him after amnesia and reconstructive surgery. It turns out, however, that he’s actually after the horse sculpture that’s always shown on the table by the stairs, which is a priceless artifact from an ancient civilization.

I tend to like utterly absurd back stories for mundane things, so I appreciated this. The Bradys, trusting as always, allow the man to stay with them, and he proceeds to give terrible advice to the kids while there. I guess having someone stay with the family to defraud them makes it even more like the Addams Family movies. There’s also a disturbing subplot about Greg and Marcia wondering if it’s okay to date each other because they’re not biological siblings, the sort of thing that Arrested Development would later capitalize on. As before, a lot of episode plots are referenced throughout, including Jan having an imaginary boyfriend and the trip to Hawaii. Vincent Price’s archaeologist character even appears, although they didn’t try to cast someone who looked like him. Towards the end, it even incorporates references to other classic sitcoms.