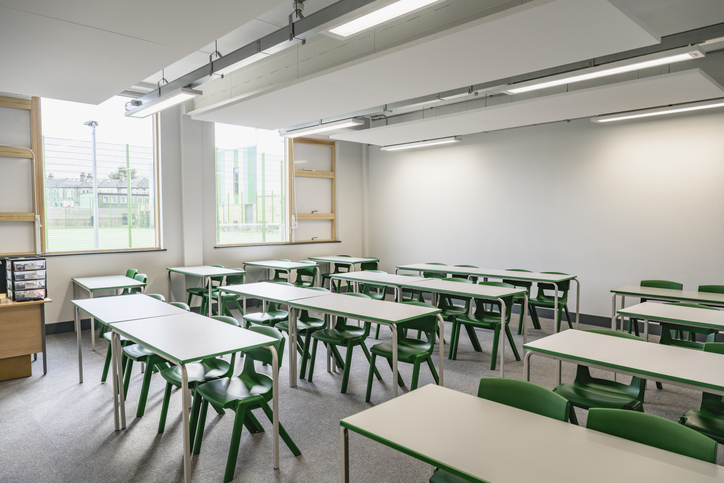 Even during a deadly pandemic and awful trend of increasingly common school shootings, White teachers like William Bennett are still some of the biggest threats to Black children’s safety and well-being.

Courier Journal reports that Jefferson County Public Schools fired him in December after conducting an investigation into his altercation with a student at Marion C. Moore High School in Louisville, KY.

According to the termination letter, he was fired on Dec. 16 “on the basis of insubordination, conduct unbecoming a teacher, inefficiency, incompetency, and neglect of duty.”

You may not recognize Bennett’s name, but you probably saw this animal in action in a cellphone video that went viral from him provoking and fighting a student in the halls of the school. The video starts with Bennett already on top of 16-year-old Jamir Strane, pinning the student’s body to the ground while several students try to physically separate them and repeatedly yell for Bennett to get off of him.

I got angry just watch this😡🤬 pic.twitter.com/ObcCYT1swj

If the violence and violating COVID safety protocols weren’t disgusting enough, Bennett seemed to enjoy attacking this student. After a crowd of students and another staff member successfully got Bennett and Strane separated, the science teacher went back for more, kicking the boy and grabbing a fistful of his dreadlocks. Bennett also reportedly escalated the fight again when the cameras stopped rolling and kicked Strane after he walked away. The investigation found that the teacher provoked or physically escalated the fight at least four times, despite his claims of self-defense.

Another student told school officials he witnessed Bennett provoke the incident by telling Strane, who survived a drive-by shooting in 2020, that he’s “just another Black boy who got shot.” Strane previously stated that he threw the first punch after Bennett told him, “you’re going to end up in the streets dead.”

This man clearly had a lot of hate and racism in his heart long before he let those fighting words fly. According to Principal Traci Hunt, Bennett was “combative about everything and refused to complete the school’s mandatory implicit bias training.” He told investigators that anti-racism requirements were the real racism and a violation of his rights. If the training is mandatory, he shouldn’t have been allowed to continue teaching while violating the school policy, but Bennett was used to getting away with being a human dumpster fire.

Today is a great day to fire, arrest, charge and convict Moore High School teacher, William Bennett for the assault of a black student on Monday. Fuck Administrative leave. We need justice! pic.twitter.com/wmujMKzvHO

Bennett violated Jefferson County Public Schools’ ethics policies by lying about his shady work history of verbal and physical misconduct with students. He was fired from Elizabethtown Independent Schools in 2001 after an arrest for breaking into an apartment to confront his girlfriend. He has bounced around school systems in Kentucky for decades despite reported incidents of calling a class “a bunch of monkeys,” calling students “Nazi humorists” for refusing to laugh at his sexual jokes, threatening physical violence, and getting into a previous physical altercation with a student.

For some reason, Jefferson County doesn’t investigate or do background checks while hiring. They simply rely on good ol’ boys like Bennett to self-disclose a disciplinary file longer than the phone book. Last week, Jamir’s mother Erica Strane filed a lawsuit against Bennett and Jefferson County Public Schools. Hopefully, criminal charges will follow.

If one George Zimmerman wannabe like Bennett can terrorize hundreds or thousands of students for decades despite repeatedly getting caught, how many other trifling teachers just like him are flying under the radar? At least William Bennett is just another bitter racist who got fired.