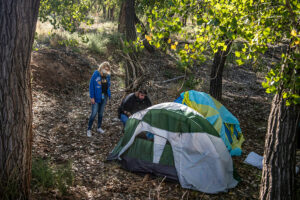 From The Christian Science Monitor: “Launched in September, [the Albuquerque Community Safety (ACS) department] is intended to complement the city’s police and fire departments by having teams of behavioral health specialists patrol and respond to low-level, nonviolent 911 calls.

While it is modeled after programs in a few other cities, ACS is the first stand-alone department of its kind in the country. The initiative is still nascent – Mr. Adams and Ms. White are one of just two responder teams at the moment. But authorities here hope it will defuse the kinds of tensions between police and residents that have surfaced in cities across the country and help reinvent 911 emergency response systems, which many believe have become antiquated.

. . . Since the police killing of George Floyd in Minneapolis in May 2020, cities around the country have debated how to reform policing – from reducing the use of lethal force, to increasing accountability, to curtailing the need for officers to deal with complex social issues at the expense of genuine criminal investigations.

Albuquerque has been debating change, too. Yet to see why the city has become one of the first to push public safety in a new direction, you have to wind the clock back a decade.

From 2010 to 2014, members of the Albuquerque Police Department shot and killed 27 people. One of them, in March 2014, was James Boyd, a homeless man diagnosed with schizophrenia. An investigation by the U.S. Department of Justice concluded a month later that APD ‘too often uses deadly force in an unconstitutional manner,’ including against ‘individuals who posed a threat only to themselves.’ The police entered into a court-approved agreement with DOJ that October, which the department has been operating under ever since.

While all this was going on, New Mexico’s behavioral health system was falling into disarray as well. In 2013, the state launched a criminal investigation into 15 of its largest mental health providers – accusing them of defrauding Medicaid – and froze their funding. The state attorney general cleared all the providers of the allegations, but the state’s mental health system has never fully recovered.

. . . In many cities, calling 911 hasn’t always been the best way to get someone help. Albuquerque’s aim with its new initiative is as much to re-imagine its emergency response system as it is to reform policing.

. . . ‘The default response is to send police to a scene and hope they solve whatever is happening,’ says [Dr. Rebecca Neusteter, leader of the Transform911 project at the University of Chicago Health Lab]. That’s ‘really not in anyone’s interests.’

. . . ‘By and large [ACS] is a positive move’ for policing in the city, says Peter Simonson, executive director of the American Civil Liberties Union of New Mexico. ‘It holds the promise that perhaps someday we will see fewer armed officers interacting with people in mental health crisis.'”