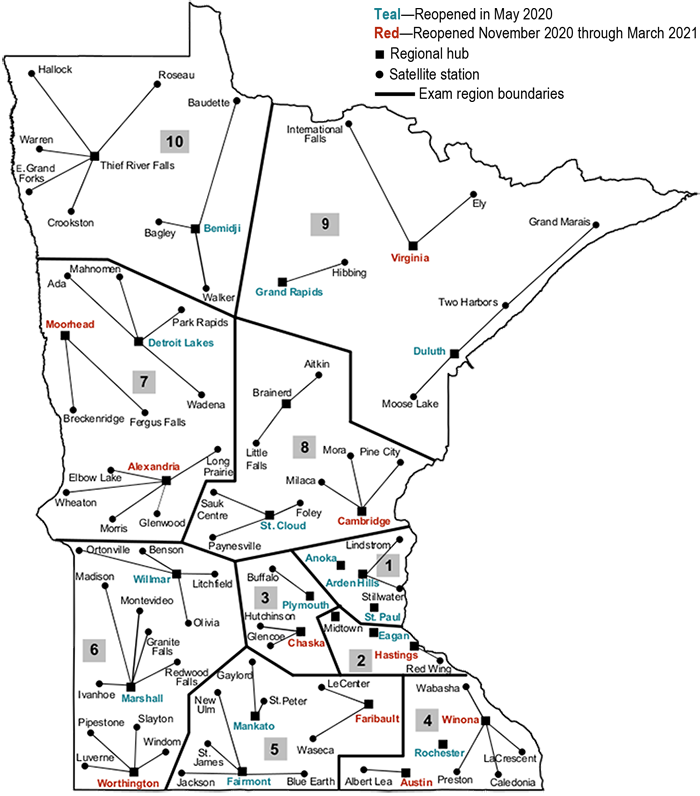 Last year, Minnesota lawmakers ordered the state to reopen all 93 of its driver’s license exam stations after most of the offices were closed during the COVID-19 pandemic, with the Legislature approving more than $5 million for the task.

The initial closures created a huge backlog of appointments for road tests, and politicians from both parties were frustrated that many in Greater Minnesota had to drive long distances for services. But as part of their reopening plan, lawmakers also asked for an independent review of the system and recommendations for the future of the stations.

Those recommendations are now in. Just as the state says it will finally finish opening all 93 stations by the end of January, the panel of experts who came up with the suggestions says that Minnesota should cut the number of exam stations by roughly half.

“We could easily see that the number of 40 to 50 would cover all the locations,” said former Thomson Reuters executive Rick King, who led the panel, at a press conference at the state Capitol Thursday.

Legislators from the Republican-led Senate and DFL-majority House said they’d have to look deeper at the report — which also recommends major changes to the state’s vehicle regulations such as increased license fees — but they also said they weren’t opposed to the idea of having fewer exam stations.

Why exam stations were closed

The Driver and Vehicle Services division (DVS) within the Minnesota Department of Public Safety (DPS) first closed all 93 exam stations in the early stages of the pandemic. Because of that, they also had to cancel more than 19,000 road tests for standard driver’s licenses, known as a Class D licenses.

The state relied on an extraordinary amount of employee overtime to clear the backlog when it reopened, but DVS also saved time and said it could run more drivers tests by consolidating services in 15 locations.

Many of the original exam stations in smaller cities and towns were only open part time, sometimes as little as one day a week, and DPS said staff were burning time traveling from larger hubs in cities like Bemidji and Willmar to smaller “satellite” locations like Litchfield, Ortonville or Baudette. In March 2021, DPS Commissioner John Harrington said he wanted to reopen exam stations “strategically” and said consolidation of sites could offer “major efficiencies.”

But the concept of closing stations throughout Greater Minnesota rankled many lawmakers, who said constituents had complained of long wait times and longer drives that hampered not just young students getting their first license but farmers, bus drivers and others. Those obstacles were unfair when people in the metro area had easier access to the basic service, lawmakers said, and argued there should be more research and public debate over the issue.

Minnesota’s legislative auditor also noted the initial consolidation to 15 stations broke state law, since DVS is required to offer knowledge and road tests for Class D licenses either in or adjacent to every county in the state. Minnesota wasn’t meeting that bar at the time.

The new report, written by King, chairman of the state’s Technology Advisory Council, and three other subject matter experts also from outside state government: Amy Albus, Jenni Hein and Theresa Wise. Together, they weighed in on several subjects, including the new “MNDRIVE” vehicle and licensing registration system.

The panel made 31 recommendations in total, including that DVS should find cheap and customer-friendly ways to use kiosks for driver and vehicle transactions, and that lawmakers should allow online applications for replacing standard driver’s licenses. The report also says Minnesota should increase a filing fee for driver’s license applications: Right now it’s $8 for a Class D license, Real ID, enhanced license or a renewed license of any type. Under the recommendations, that would shift to $11 for a standard license or renewal and $16 for a new REAL ID or enhanced license.

The report says the money would help pay for the added complexity of handling REAL IDs and help struggling Deputy Registrars — the public and private offices that help with licensing, registration, car titles and plates — make more money.

The report found that people in the state’s “ecosystem” of vehicle services are exhausted by the pandemic and from handling demand for REAL ID driver’s licenses and identification cards. The report noted that DVS employees that deal with the public should be offered de-escalation and negotiation training because of unruly customers.

Some recommendations could be carried out by DVS, and other changes would have to be made by the Legislature.

When it comes to exam stations, the review found DVS should keep between 40 to 50 exam stations. “We believe this number of exam stations will provide good coverage and at the same time provide some efficiencies over the current number,” the report says.

The report says “hub” exam stations in larger cities throughout the state are generally in the right locations, and says the state should keep enough satellite offices to meet legal requirements.

To make its recommendations, King said the panel looked at the auditor’s report, a previous memo from the state’s Department of Management and Budget that suggested around 30 stations would be adequate. The panel also conducted site visits and interviews across the state, talking to state officials, workers at exam stations and more.

State Rep. Frank Hornstein, a Minneapolis DFLer who chairs the House’s Transportation Finance and Policy Committee, said King’s recommendation is a “start.” He said wants to look into where stations aren’t getting usage but said his “bias is to keep as many of these open as possible and minimizing any inconvenience people feel.”

“I’m not committed to adopting that recommendation, I just want to make sure people from International Falls don’t have to go to Duluth or St. Cloud,” Hornstein said. “We have to take a more granular look at what this means.”

Sen. Scott Newman, a Hutchinson Republican who chairs the Senate’s Transportation Finance and Policy Committee, said the number of exam stations is less important than making sure “that the exam stations that we have are open, staffed and available to folks so that when they want to take their tests, they know when they get there they will be taken care of.”

A DPS spokesman did not respond to a request for comment.

The independent panel also made recommendations aimed at reducing testing backlogs at exam stations. They questioned whether the state should raise the cost of third (and subsequent) attempts at failed knowledge and driving exams. The first two tests are free, and the report says there is an “alarming number of failed attempts” and more should be done to encourage more preparation.

But the report also acknowledges there should be more review of whether a fee change would be “helpful and not overly punitive.”

The panel said DVS should be “holding driving schools accountable” for the pass rate of students and investigating high failure rates at driving schools.  “You had people take the exam eight, nine, 10 times, which seems extraordinary.” King said. “If you can imagine people trying to find appointments to get in to get their exam taken, it’s just extraordinary that people would have to take it that many times.”

The report also recommends state lawmakers should end a requirement that people who are over 21 and who are transferring a standard driver’s license from another state, must take a knowledge test in Minnesota. “We believe this is unnecessary and agree with the many states that do NOT require it,” the report says.

King and his outside experts also said Minnesota should extend the validity of standard driver’s licenses from four years to eight years. Four years is the shortest term in the country, the report says.

King’s review also endorsed a host of recommendations made by the legislative auditor, such as building a way to forecast demand for Class D road tests.

And lastly, the report says the state should allow third-party groups to offer road tests for standard driver’s licenses to help when demand far outpaces supply of exams. The state already does this for commercial driver’s licenses, and the GOP has previously proposed extending that to standard licenses.

But Gov. Tim Walz’s administration has resisted the idea. Harrington said in March that it would take time and money to expand the Class D license testing and monitor outside workers, and also said it could have an “impact on public safety.”

DPS “will not place the chance for potential convenience over the safety of our teen drivers,” Harrington wrote at the time.

Hornstein said Thursday the proposal for third-party road tests for standard licenses was a recommendation he couldn’t commit to. He said legislators need to ensure safety over convenience on the issue. “Right now I trust the public sector to do the job when it comes to these tests,” Hornstein said. “That is one where personally I’m not ready to embrace that.”

King said they didn’t consider legislative impasses over certain issues when coming up with their report because they’re independent of state government. He said lawmakers will hash out their differences, but said “our job was to tee all the things up that we see and then let them do the good work that they do.”