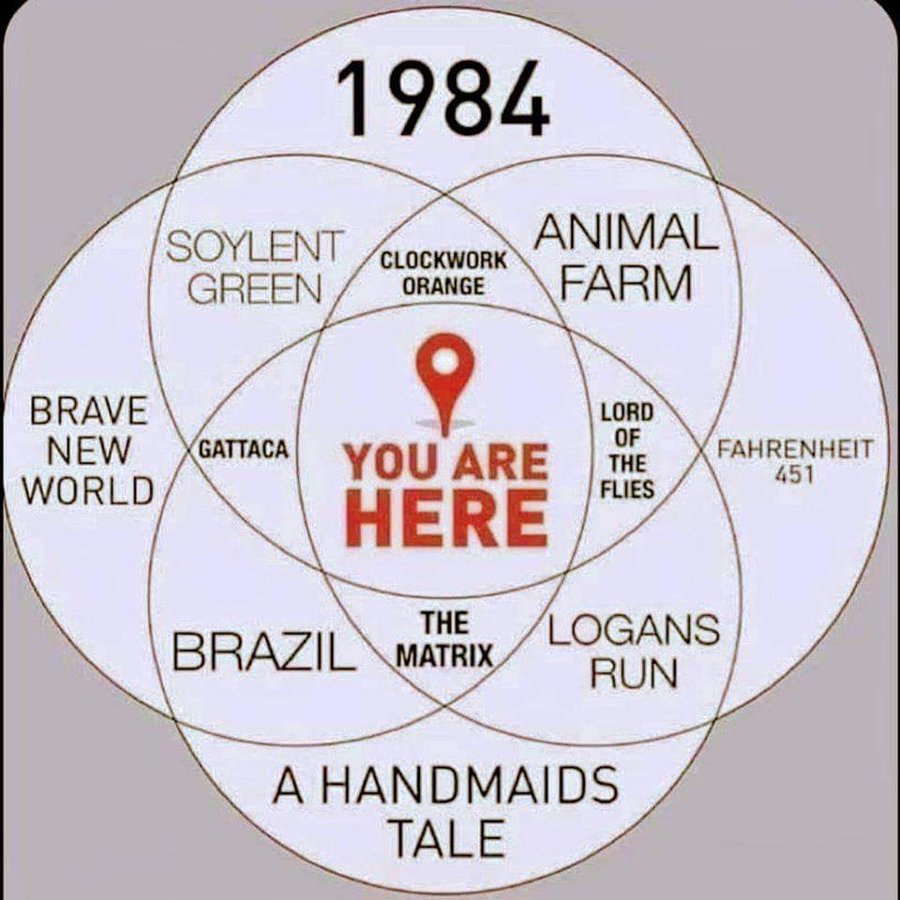 Do Androids Dream of Electric Sheep? And Other Pressing Questions (PART 1 of 2)

Well, Dear Reader, in which Dystopian tale do we find ourselves held captive, amid masks, interpersonal
chaos, failing economies, alleged bioweapons, and Injections Without End Amen?

To be sure, there are still humane moments to be had, Glory to God. But overall, I think this fictional
Venn diagram captures the situation. It suggests we are being held at the intersection of 1984, Brave New World, and Fahrenheit 451, among other supposedly fictional scenarios.

Frankenstein, Jurassic Park, Idiocracy, and They Live also strike a chord, as does Blade Runner. That latter film is based on Philip K. Dick’s 1968 novel Do Androids Dream of Electric Sheep? The story is a “transhumanist” fantasy, in which real humans and human-like androids interact. You’re never entirely sure which is which, and occasionally the androids act more humanely than the humans.

Before you guffaw at these comparisons, please watch the astute Dr. Carrie Madej, who says there is much more to the Covid shots than, likely, you have heard.

During her recent presentation at a conference in Nashville, Madej explained that the shots are the gateway to “transhumanism” and that the push for that illusory goal is the real reason “we’re going through this chaos.” The “transhuman” concept encompasses manipulating human genes and melding artificial intelligence (AI) with the human body. Madej says the Covid shots do both.

I realize we have entered strange, arcane, psychotic territory. Believe me, we’d all rather be somewhere else. Stick it out for a few minutes, because I believe Madej has picked up the signal through the endless noise of misdirection and misinterpretation.

As Madej describes the agenda at play, the shots’ ingredients, and some of the shadowy people involved (more about them in PART 2), you will confront several questions. They include: Who is God? Who is man? What does being a human mean? And as an Orthodox Christian during these times, how do you plan to preserve the One Holy, Catholic, and Apostolic Church established by Jesus Christ the God-Man and handed down by generations of martyrs, ascetics, and confessors?

The Megalomaniacs have the means, the money, the messaging, and the brainwashed Masqueradi in hand.
They are making a mad dash to establish a new global system with new kinds of humans. Covid-19 kicked off their putsch to capture all the marbles on the planet. FYI: You are one of the marbles — and they want to hijack your brain and your body.

Dr. Madej is a physician from McDonough, Georgia, who consistently has warned against the Covid shots. I quoted her in my piece last year. According to Madej, the Covid shots officially have launched “Human 2.0,” the start of remaking humanity in the Megalomaniacs’ overblown image and likeness. Ironically, these atheist, materialist Übermenschen are religious zealots. They believe their gods Science and Tech can fix humanity’s problems and even can bestow eternal life. To them, “immortality” means shuffling off the mortal coil to live forever as an AI-human hybrid or a digital avatar.

No kidding, says Madej: The Megalomaniacs earnestly believe in “transhumanism.” She says they believe “a human being is only memories and dreams … [and] if they upload all of our memories and dreams into the cloud, then they can download them into a new body, a robot or a digital avatar, like a video game. You have to know what they’re thinking.”

In this way, she says, they want you “to live forever [and] always be connected through a hive mind.” As evidence, she shows this headline: “Scientists propose putting nanobots in our bodies to create ‘global superbrain.’”

The Megalomaniacs have plans for human bodies called “Avatar Project Milestones.” They are executing the plans. The milestones range from “A robotic copy of a human body remotely controlled via BCI [brain-cloud interface]” by 2020 to “A hologram-like avatar” by 2045. They have moved this latter milestone to 2030. Someone is in a hurry — No one is more dangerous than a crazed Utopian on a mission.

By the way, this putsch has revealed the world’s governments and institutions as irrelevant to everyone
except the Megalomaniacs, who have many tools of subjugation at their disposal.

Scroll Down to Continue

But guess what? Without your compliance, the Masters of the Universe actually have zilch. Hello, is anyone home? Naïveté and compliance are helping to keep this operation in full swing. Stop complying.

Madej says the Covid shots start the process of making you “transhuman” via their untried technology and their synthetic ingredients. The shots inject the synthetic spike protein code (a code!) for SARSCoV-2, theoretically stimulating your body to produce antibodies against the virus and theoretically leading to immunity. Three of the code’s known ingredients are HIV 1, Chromosome 8, and a synthetic amino acid called “Pseudouridylyl.” That is, the code tricks your body into producing this junk. HIV, anyone? In addition to their myriad charms, the shots provide an ON switch without an OFF switch, making your body a veritable factory of spike proteins and antibodies. What could possibly go wrong?

Moderna and Pfizer deliver the synthetic code via synthetic messenger RNA. AstraZeneca delivers the code via a chimp virus, which increased the incidence of HIV in human trial participants. Again: HIV, anyone? J&J delivers the code via a human adenovirus. Any aborted fetal cells in the shots add to your potential genetic change. AZ and J&J don’t use mRNA but do have a higher chance of permanently affecting your DNA. Notice the common thread: Pseudo-, synthetic, fake, fake, fake.

Madej says to avoid all Covid shots — as in, all brands. They all insert a fake code into your body and suppress your “immune checkpoints.” Translation: God gave you an immune system; these shots wipe out a good portion of it. No immune system sounds like AIDS.

Pro tip: Avoid all other shots, pills, and potions in the pipeline.

The Megalomaniacs have no qualms about cracking American judges and millions of other eggs, here and abroad, to make their omelet. I’m sure this experiment will pay off soon! Thank you for your patience; “immortality” is worth it!

According to Madej, hydrogel is the other known “transhuman” component, of at least the Pfizer and Moderna shots. Hydrogel composes the nanolipid particles that envelope the mRNA to protect it from being destroyed by your extremely canny immune system. Hydrogel provides the AI component for the shots and is the secret sauce of “transhumanism.” Among other feats inside a body, hydrogel can meld with human tissues, disassemble, reassemble, regenerate itself, and form nanobots.

Madej says hydrogel has been used in Human 2.0 military experiments with Black Hawk helicopter pilots. Each pilot wore a magnetic helmet that linked his thoughts and eye movements to the aircraft. The aircraft responded, as though it were one with the pilot. Vaxxers: Do not attempt this at home.

Madej laboriously examined samples of the Pfizer, Moderna, and J&J shots under a simple microscope and took photos of the results. The objects she saw in the samples resembled pond scum and made her cry. She saw bright colors that she says may be a superconducting material, metallic flecks and rings, iridescent wafers, gelatinous material, and live parasites resembling the Hydra vulgaris. The assorted objects flitted around the slide, as though they were searching for something.

I just want to be human. Is that so wrong?

Separately, Dr. Robert Young used various microscopes to examine samples of four of the shot brands, and he recorded the presence of graphene oxide, various particulates, and parasites. Young concluded: “The name ‘vaccine’ is likely to be an escamotage (trickery) used for bureaucratic and technocratic reasons in order to receive an urgent approval, ignoring all the normal rules necessary for new drugs, especially for those involving novel nanotechnological mechanisms which have never been developed nor experienced by humans any where, at any time in the history of World [sic].”

Escamotage, where can I flee from your presence?

Dr. Young ended a recent discussion with an interviewer by encouraging everyone to pray for each other. Madej ended her presentation similarly. She said: “People ask me, ‘Well, how did this happen, and how do we get out of it?’ … It’s one reason: We disconnected ourselves from God Our Father in Heaven.”

I told you Madej is astute. This young, unassuming doctor — a lone voice in the wilderness — is warning humanity against taking one more step down this path. She is urging a sincere return to God as a means of mitigating this Reality/Sci-fi/Horror Show we are stuck in. The show won’t end soon, but our repentance may mitigate it.

Noncompliance with the tyrants, reliance on God, and repentance are your only real options. The world’s problems primarily are spiritual, and they must be addressed spiritually. Fast, pray, repent, confess, attend church, read Scripture and the lives of the saints. Rinse, repeat. Pray for yourself, your neighbors, your community. Ask God to forgive, heal, and guide you one step at a time.

If you are an Orthodox Christian, your task is to keep the Orthodox faith alive and well on planet Earth. Hint: Masks and pharmacopoeia will not do the trick. Seek out and support the priests and monks who are holding the line against those blasphemies. Fr. Peter Heers of Orthodox Ethos advises anyone who took the shots to repent and confess immediately because in addition to being physically detrimental the shots are spiritually detrimental.

Those with ears to hear: Smash your TV sets. Avoid all syringes. Hide your kids. Stay human.

Editorial Note: For readers content to write this off as “conspiracy theory” mongering, please consider where we are. We are experiencing everything from injection mandates for work, for travel, for shopping, for banking on to lockdowns in Austria and Germany for only the unvaccinated. Control and coercion in the name of Covid is happening on a global scale. Ask yourself – if someone had described the events of the past two years to you in 2019, what would have been your reaction? Most of you would have written off the person telling you as a nut. Yet it has all happened, and continues to happen at an accelerating pace.

The vaccines and their mandates are clearly important to more than one power bloc of elites. At this point, we are all speculating as to how this level of global control is even possible. Is it multiple groups grifting in the name of a crisis for their own ends? Is the vaccine passport the goal, as it can become virtual currency and/or a social credit system giving the powerful the greatest system of control ever seen? Perhaps these events are even ushering in a system that will support the regime of the anti-Christ? Or, as this article alleges, is the vaccine and its possible transhumanist / population reduction properties the real goal?

Then again, maybe all this is happening at once.

One thing is clear, the real powers-that-be behind Covidism absolutely do not care about the politicians who flack for them. This article is clearly right about that. Biden and his Democratic Party are ignoring the results of elections in 2021 and doubling-down on policies that will almost certainly lead to their shellacking in 2022. If self-preservation were their goal, they would reverse course immediately on their vaccine mandates and harmful mitigations.

The same can be said of the many businesses who have become willing agents of coercion, even though doing so is costing them employees, customers, and money.

Neither businesses nor endangered politicians are reversing course. Instead, they are hitting the accelerator. So, clearly, their self-interest is not a factor for whomever is really steering the world over a cliff in the name of Covid.

Who is really behind all this? What earthly power, or even coalition of powers, could move almost the entire world in one direction using a virus with a 99% survival rate as justification? Or are the real forces behind our ongoing descent into madness not earthly at all?