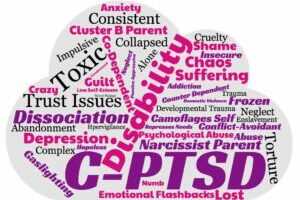 Why The C in C-PTSD Will Haunt You

From Gemini Adams: “Complex Post Traumatic Stress Disorder (C-PTSD) is the unfortunate cousin of PTSD, referring to an identifiable mental and emotional health condition that arises from traumatic events that consistently happen over a long period of time, are inter-personal, and often occur in childhood.

Abandonment, neglect, sexual abuse, domestic violence, physical, emotional or psychological abuse — such as spanking, bullying, gaslighting, shaming and name-calling — torture, being enslaved or held captive by a terrorist, kidnapper or within some kind of cult or [authoritarian] dynamic (including religious, political or educational settings), all fit the bill.

However, unlike PTSD, the symptoms of C-PTSD are often entrenched in an individual’s personality, having taken root during formative years, when attachment styles and brain development are fragile and still maturing.

This typically leads to severe, yet often-times invisible symptoms, which can inwardly feel like a disability, including: mental health challenges, lack of emotional or self-regulation, intimacy and trust issues, pervasive low self-esteem, guilt and toxic shame, lack of boundaries, prolonged feelings of terror and hyper-vigilance, emotional and somatic flashbacks, conflict-avoidance, chronic self-isolating, struggles with spatial awareness, interoception and cognitive function, mood swings, dissociation or detachment from reality, a tendency to self-medicate with substances, work, sex or sports, suffering from repetition compulsion, exhibiting both counter-dependent and co-dependent behaviours, people-pleasing or dominating, and real struggles in forming and maintaining healthy relationships with self and others.

Essentially, C-PTSD is complex by definition; both in its symptoms and also in how it is first formed. For example, a child who grows up in the chaos of a dysfunctional home; whereby the parent who suffers from narcissism, a mental health condition, cluster B personality, or an addiction, is ill-equipped to provide that child with the foundational elements that will promote the formation of a healthy, happy adult.

An absence of boundaries, or violated ones, lack of compassion or empathy, unavailability, cruelty or abuse, ignored needs, love withdrawn or over-exerted at times, provides no model for clear and direct communication, healthy emotional expression or authentic relating. Consequently, the child simply fails to get the right operating system fully installed. They are robbed of the chance to form a strong and solid sense of self, or learn what kind of behaviours within relationships are right or wrong.

C-PTSD is often described as life-altering, but it really goes much, much deeper than that. The absence of these essential ingredients in one’s early life, in the words of many of my own clients, creates ‘a void.’ Life is certainly altered. But, unlike with those who suffer symptoms of PTSD, whereby there is a noticeable ‘healthy’ before — where the adult was mentally and emotionally well, capable and content in communications and relationships prior to the traumatic event — with C-PTSD there is rarely a ‘healthy’ before. As international activist Jesse Jackson wisely observed: ‘You can‘t teach what you don’t know.’

The end result of this is that a ‘wounded child’ is left wandering around inside an adult body, doing their best — but lacking the tools or wherewithal — to behave or interact as a ‘healthy adult’ would. This can include the capacity to earn or retain money, to create stability, to hold down a job, to identify one’s own needs, to understand what one even enjoys or is good at, to engage in social activities or even feel that you belong, or are worthy of being part of any group, job, community or even receiving human decency.”

Why The C in C-PTSD Will Haunt You