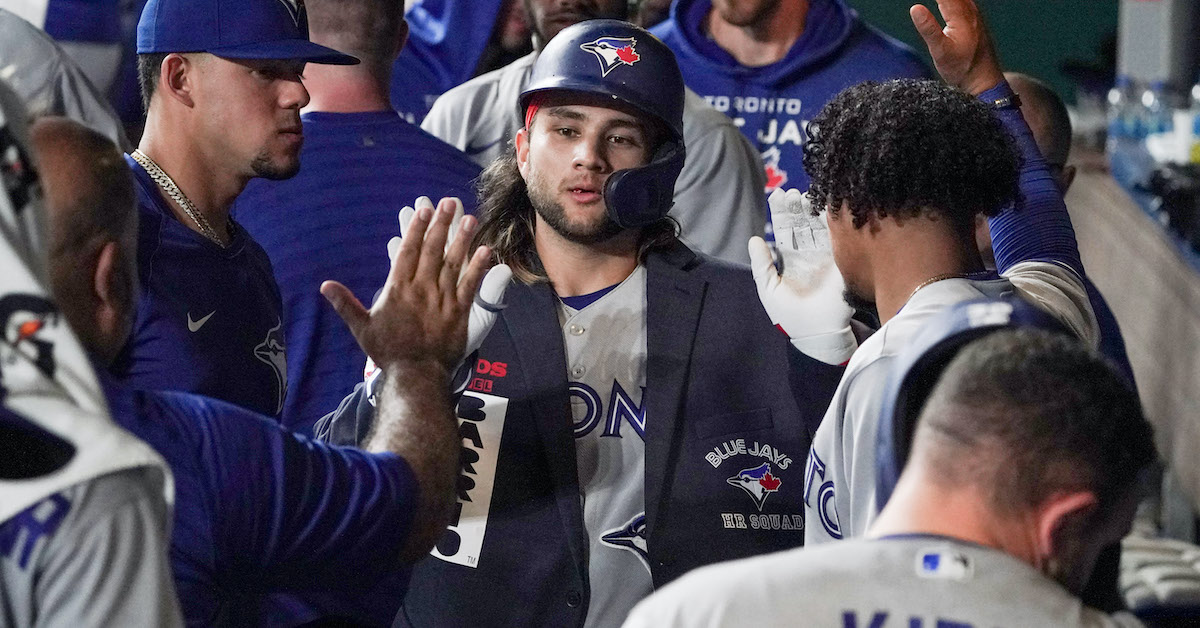 Why the Next Two Weeks Are Crucial for the Blue Jays

The Blue Jays started a short road trip off in style on Monday night with an 8–0 shellacking of the Royals. It was a feel-good kind of an evening — at least if you’re not a resident of Kansas City — in that the Jays got homers from two young players falling short of lofty expectations (Vladimir Guerrero Jr. and Bo Bichette) and that a recently struggling bullpen (4.70 FIP, -0.5 WAR over the last 30 days) one-hit the Royals over four innings in closing out the rout. It was one of the 10 games in which the Jays play teams at the bottom of the American League before heading to New York to square off against the first-place Yankees.

One of the questions I was asked on one of my radio hits yesterday, this one with Blake Murphy of Sportsnet 590 in Toronto, was if the next two weeks were especially important for the Jays, coming against the weakest teams and with a seven-game divisional deficit. I believed it was, but it did make me curious just how important it was. And since I can’t run a ZiPS projection in my own head but need a computer, here we are! Just how important are the next two weeks for Toronto?

It would be hard to characterize the Blue Jays as a struggling team. While they were hovering just above the .500 mark in mid-May, they’ve been on a bit of a tear lately, winning 14 of 19 games. A 32–22 record stands at a 96-win pace, comfortably above the 88-win median that ZiPS projected for each of the top four AL East teams back in April. The problem is that the Yankees have been even better at 39–15, or a 117-win pace.

Still, Toronto’s record is impressive, and even more so when you consider how tough a schedule it’s had. The team’s average opponent this year has had a .544 winning percentage, which translates into an 88–74 record. In other words, a typical game for the Jays has seen them face off against a team projected by ZiPS to be as strong as the average non-Orioles AL East team. From a projection standpoint, ZiPS believes that they have had the toughest schedule in baseball so far.

A seven-game deficit is a significant one. Even if you thought the Jays were as solid as the Yankees at the start of the season, winning one more game over 162 games is an easier task than winning eight more over 108. Even if New York plays just .500 ball the rest of the season, Toronto has to maintain its pace (62–46, .574) in order to finish with a one-game lead (avoiding a tiebreaker now that MLB has killed off game 163).

Opening up ZiPS, I ran some experiments on the team’s fate over the next two weeks. Let’s start with the current projections.

Despite the early-season difference in the standings, ZiPS sees the Jays and Yankees as about equal, with the former making up three of the seven games in the standings based on schedule the rest of the way (ZiPS projects Toronto now has the easiest schedule remaining in the AL). ZiPS also projects Toronto trimming, on average, 0.67 games from New York’s lead over the next nine games. That’s triple the amount that ZiPS projects the Jays to make up in all other possible nine-game runs (0.21 games per nine the rest of the season). And that’s just to get to a three-win deficit, not to win the division.

Imagine Toronto has a disappointing trip and goes 3-6 and the Yankees go 5-4:

A nine-game stretch this underwhelming cuts out more than a third of the scenarios in which the Yankees are vanquished by the Jays and nearly doubles the probability that the latter miss the playoffs entirely, from 9.0% to 16.8%. I re-did the exercise for all other nine-game stretches for Toronto this season, and this was easily the stretch in which going 3–6 as the Yankees go 5–4 had the most severe consequences.

After these next nine games, Toronto faces significantly tougher competition: a three-game set against the Yankees at home, half of the six remaining such home games this season. Let’s assume the Jays and Yankees both exactly met their predictions on average in the nine games preceding this series, leaving Toronto’s probability at 29.4% division and 91.0% playoffs. This series is always a high-leverage one, but here are the exact projection changes in this scenario:

Blue Jays vs. Yankees (Above Scenario)

To sum things up, if they go any worse than 6–3, the Jays will spend the next week and a half losing ground in the AL East before a three-game series that could swing their division favorite odds by roughly 25 points. In other words, these are two very high stakes weeks, and there’s a good chance that the results are crucial to determining if the fight against the Yankees is a dramatic duel or a quiet rout.

Why the Next Two Weeks Are Crucial for the Blue Jays