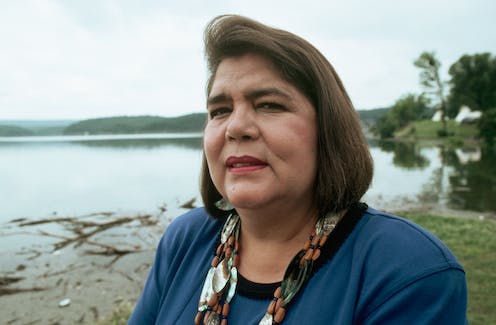 If you fish in your pocket or purse for a U.S. quarter today, there’s a chance you’ll see Wilma Mankiller’s face. She was the Cherokee Nation’s first female principal chief, and she inspired generations of Cherokees and young Native people like me.

In 2022, Mankiller was one of the first women honored by appearing on a series of quarters, along with renowned poet and activist Maya Angelou and physicist and astronaut Sally Ride. Mankiller’s quarter, issued in the summer of 2022, marks the first time that a Native American woman has been featured on a U.S. coin since Sacagawea appeared on the golden dollar in 2000.

As a historian of Native American history, I credit my professional career to Mankiller, whom I heard speak at Salem Women’s College when I was an undergraduate student there. I had never seen a non-Native audience listen so intently to a woman who looked like my father’s ancestors and grew up in rural Oklahoma, as he did. Like many young Cherokee people, I was raised outside the boundaries of the Cherokee Nation.

Following her lecture, I tore through her autobiography, “Mankiller: A Chief and Her People.” In her book and through her life’s work, Mankiller introduced a generation of people not just to Cherokee history but also to a model of Native women’s leadership, leading by listening to the voices from her community and supporting the programs they sought.

Mankiller’s life resembled many Native people’s lives in the 20th century before she assumed the role of principal chief of the Cherokee Nation in 1985.

She was born in Tahlequah, Oklahoma, at an Indian hospital in 1945. She grew up on land secured by Cherokee people over three generations of shifting U.S. federal Indian policies, each with devastating results: the Treaty of New Echota in 1835, the Treaty of 1866 and the Curtis Act in 1898.

Mankiller’s family relocated to San Francisco in the 1950s after Congress passed the termination and relocation policy, seeking to break up and relocate Native American tribes to assimilate them. In San Francisco she met Indigenous people from diverse communities.

She came of age in San Francisco during the Red Power Movement, which was marked by Indigenous people’s activism across the country and aimed to draw attention to broken treaty promises, widespread dispossession and police brutality. She and her siblings supported the occupation of Alcatraz, a takeover by Native activists that lasted 18 months.

She married young, had children and willed herself through a college education. She divorced and returned home to Oklahoma in 1976 as a single parent with two daughters. Mankiller’s family history, like that of so many Native Americans in this country, cannot be told or understood without understanding changes in federal Indian policy, which often dictated where Native people lived and the economic opportunities available to them.

What she means to Cherokee people

Mankiller’s life was similar to those of many families who remained in Oklahoma on allotments or within Cherokee communities after Oklahoma became a state in 1907. Until the age of 11, she grew up in Adair County, which was about 46% Cherokee in the 2020 census.

When she returned to Oklahoma from California in the late 1970s to work for the Cherokee Nation, she prioritized and supported a community-driven project that brought running water to the Bell community. Bell, a rural community in Adair County, is still home to large pockets of Cherokee people. This effort was later dramatized in the 2013 film “The Cherokee Word for Water.” Mankiller’s commitment to improving the lives of Cherokee people was central to her work, even before she became chief.

Her rise to the position of principal chief in 1985 coincided with a moment when the efforts of civil rights activists, Black nationalists, Red Power and women’s rights activists of the previous decades were bearing fruit. She represented and modeled what people like Gloria Steinem, with whom Mankiller formed an enduring friendship, hoped to see more people achieve in the larger U.S.

Mankiller’s impact extended beyond Cherokee people. In a nod to her accomplishments, President Bill Clinton awarded her the Presidential Medal of Freedom in 1998. Mankiller understood that she represented how far women leaders had come and the hope we might still arrive where we need to be.

I still remember learning of her death from pancreatic cancer in April 2010 when I was a graduate student in history at the University of North Carolina at Chapel Hill, not far from Salem College where she first inspired me. I, like many others I imagine, wept for her, enormously proud of all she had achieved.

The Cherokee value of gadugi

Mankiller’s transition to chief wasn’t easy. People initially questioned a woman’s ability to lead the tribe. If there was any doubt of Mankiller’s capabilities as a leader when she took over as chief in 1985, in her second election to office six years later, she received almost 83% of the vote.

She gained support by exemplifying gadugi – a Cherokee word that means working together collectively for the benefit of the whole community. She drew upon her culture, history and tribal identity as a leader, and she raised her daughters Gina and Felicia Olaya to do the same. Though neither held office, both have worked for and supported the Cherokee Nation throughout their lives.

During her time as chief, Mankiller provided a foundation for the continued growth of the Cherokee Nation. Enrollment in Cherokee Nation doubled under her leadership. She championed education and secured a US$9 million vocational center. A 1991 Parade Magazine profile described her leadership style as quiet but strong.

At her mother’s memorial, Gina, who died in October 2022, said that her mother taught her family “how to laugh, how to dance, to appreciate Motown music, to be a humble servant to our people, to love one another unequivocally and to cherish each and every moment we spent together as a family.”

Mankiller articulated what generations of Cherokee people knew – that Indigenous people are capable of generating the solutions to the problems they face. As chief, she focused on issues that benefited some of the most vulnerable Cherokee people, such as rural development, housing, employment and education. Mankiller listened to community members to determine the way forward. I believe her legacy, now enshrined on a quarter, will continue to inspire new generations of people seeking to make a difference in the world.