Within Large-Cap Value, Consistency Is Key

It’s been about 16 years since WisdomTree launched its first suite of ETFs, and although our product lineup has expanded and markets have drastically changed over almost two decades, our “original idea” remains intact.

WisdomTree introduced its first ETFs on the premise that market cap weighting was inherently flawed, and our early research indicated that weighting a stock portfolio by fundamental, objective measures of company health could potentially deliver better risk-adjusted returns.

Part of our early lineup weighted the U.S. equity market by dividends, where companies that paid more dividends received greater exposure than those that paid less, while disregarding non-dividend payers altogether. Sixteen years later, our thesis has been proven correct, and our U.S. LargeCap Dividend Fund remains a shining example.

A History of Steady Results with Reduced Volatility

Launched in June 2006, the WisdomTree U.S. LargeCap Dividend Fund (DLN) took a unique approach by dividend weighting the largest companies in the U.S. equity market. Because of its emphasis on dividends, it has been classified as a value strategy throughout its lifetime.

Although value strategies experienced headwinds in the decade and a half after the global financial crisis (due to the attractiveness of growth strategies in a historically low interest rate environment), DLN remained a top performer within its value cohort.

Within its Morningstar U.S. Large Value category, DLN has outpaced most other competitors practically since it was launched. As of March 31, it has been in the top quartile of large-cap value funds over the past 1-, 5-, 10- and 15-year periods. Only in the three-year period did it barely fall out of the top tier, finishing in the second quartile.

Performance data for the most recent month-end is available here.

DLN’s consistency warrants praise. On a trailing three-year basis using quarterly observations, it has eclipsed the performance of the Russell 1000 Value Index, representing the broader large-cap value equity market, more than 80% of the time. Only 10 times in 52 observations did the Russell 1000 Value surpass it on a three-year basis, giving credence to DLN’s efficacy as a large-cap value anchor in a portfolio. 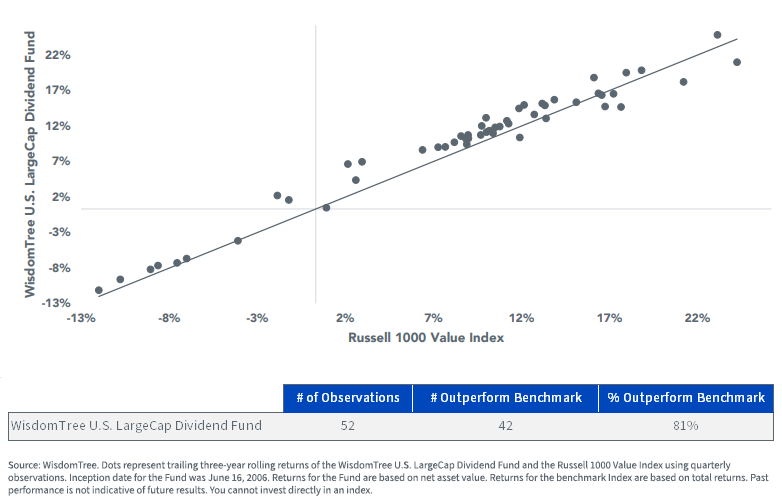 Over the past 15 calendar years, DLN delivered less volatility than the Russell 1000 Value Index in 14 of them. The one year in which it didn’t was 2015, where it was only more volatile by 11 basis points (bps).

Normally, investors might expect a strong performance record to be accompanied by expensive valuations, but DLN proves to be an exception to the rule. Despite its impressive history versus the Russell 1000 Value, it has maintained valuations in line with the broader large-cap value market.

As of March 31, DLN is virtually in line with the Index when comparing their price-to-earnings (P/E) and forward P/E ratios, despite delivering strong performance in this year’s value rally.

This is not surprising when you compare these relationships throughout history, either. There has been a strong tendency for DLN to trade within a very narrow range of P/E and forward P/E premiums and discounts versus the Russell 1000 Value since inception, if you exclude the steep discounts resulting from market shocks like the global financial crisis and the onset of the COVID-19 pandemic.

DLN has almost never traded above a 10% premium by either metric, all while delivering strong historical performance within the value markets. 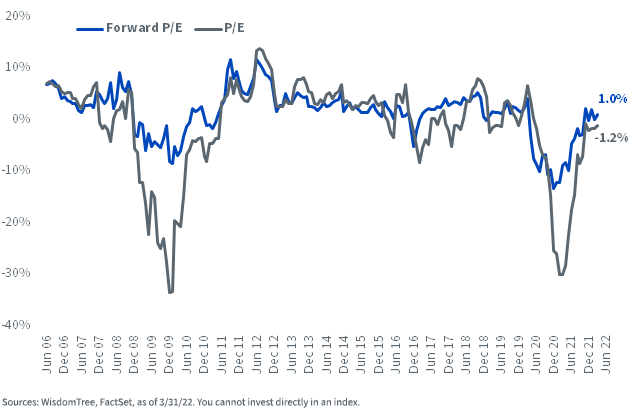 Meanwhile, while the S& 500 has gotten “growthier” over the past decade-plus due to the surge in growth stocks and its market cap-weighted methodology, DLN has remained strongly discounted relative to the broader U.S. equity gauge. 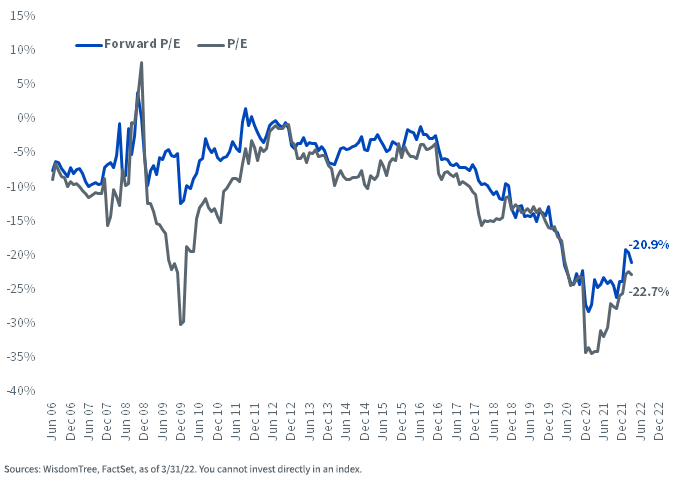 Valuation benefits are not the only potential advantage, however.

Investors tend to associate reduced valuations with a sacrifice in quality measurements, but DLN, once again, is an outlier. As of March 31, it offers a notable pickup in return on equity versus both the Russell 100 Value and the S& 500 (despite its richly valued growth heavyweights), and it maintains a return-on-assets advantage against the former as well.

Notice that its dividend yield is also around 2.5%, much closer to the expected year-end Federal Funds Rate given the anticipated path of rate hikes by the Federal Reserve in 2022. The yield advantage may potentially help add portfolio income without sacrificing equity exposure, whereas funds that track these Indexes may be left behind.

DLN’s emphasis on dividends as its preferred measure of value, rather than traditional value strategies, also yields some contrasting sector exposures.

Rather than relying on conventional deep value sectors like Financials, Health Care and Industrials (all with double-digit weights in the Russell 1000 Value), DLN under-weights in all three in favor of Information Technology and Consumer Staples, two higher-quality sectors that have paid consistent dividends.

Many of these underweights and overweights are even more pronounced compared to the broader U.S. equity market.

DLN is a shining example of WisdomTree’s early ethos: if you weight companies by an objective measure of underlying financial health, such as the ability to consistently pay dividends, that inherently can keep valuations in check as well.

Compared to a market cap-weighted basket like the Russell 1000 Value, where stock prices dictate the ultimate exposure within the Index, fundamental weighting can potentially have more to offer, and DLN offers a consistent record of proof.

Important Risks Related to this Article

There are risks associated with investing, including the possible loss of principal. Funds focusing their investments on certain sectors increase their vulnerability to any single economic or regulatory development. This may result in greater share price volatility. Dividends are not guaranteed, and a company currently paying dividends may cease paying dividends at any time. Please read the Fund’s prospectus for specific details regarding the Fund’s risk profile.

Within Large-Cap Value, Consistency Is Key