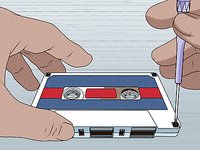 How to Fix a Cassette Tape

Old audio cassette tapes can run into a number of problems that call for some cassette tape surgery. For example, the tape might tear and break, requiring you to splice it back together. Another common issue is for the tape to come unraveled from one of the wheel hubs, in which case you can splice it to the end of the tape on a new wheel hub from a blank cassette tape. Either way, you can get the job done with a few simple tools and a delicate touch!

[Edit]Putting a Tape Back on the Wheel Hub

[Edit]Putting a Tape Back on the Wheel Hub

How to Fix a Cassette Tape