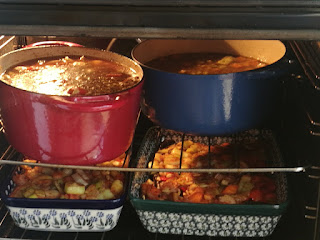 I started writing this post as four dishes were cooking in my oven, the product of a couple of hours’ preparation. The content of the post, however, has been in preparation for many years, decades even, the feeling that man-cooking and woman-cooking are fundamentally different arts. They use different methods, different ingredients, different utensils and different parts of the brain. They also generate different feelings, positive and negative, in the cook and maybe those who enjoy the product of his or her work.

Let me say at the outset that women are perfectly capable of man-cooking and men are certainly capable of woman-cooking. I am not putting forward any naïve essentialism about cooking (although some critical essentialism may be allowed at my age). I am merely describing two archetypes which will maybe resonate with my readers.
I am very aware when I woman-cook. It is generally a relaxing and leisurely activity that involves slow cooking, making do with whatever ingredients one has at hand and permits the preparation of several dishes simultaneously, especially if they belong to the same cuisine, Mediterranean, Indian, and even Italian. I am usually listening to music and think about many things besides cooking.
Woman-cooking is very tolerant and economical. It is not time-critical. It permits the cook to engage in different activities, including cleaning up utensils once they have been used, engage in all kinds of peripheral or irrelevant activities (including reading emails) and even, as I did today, visiting the garden to do some watering or collect some fresh ingredients.
Woman-cooking is economical. Few ingredients are discarded, utensils including pots, pans, spatulas, cutting boards can all be used at the same time to prepare multiple dishes, and an oven can be used to prepare several dishes together.
Woman cooking is also quite tolerant of mistakes. There are few irrecoverable situations. Over-salting or over-spicing a dish can be overcome by adding new ingredients and there is little danger of overcooking. Of course, woman cooking cannot recover burnt onions or burnt butter but even such calamities can be easily overcome by starting afresh.
Finally-woman cooking is quite good for recycling and reheating dishes. Many if not most products of woman-cooking will improve with time, by putting them aside and reheating them at the right moment. This is certainly the case with the three dishes I prepared earlier, vegetarian moussakas, chickpeas with leeks in a lemon and egg stew, and traditional Greek giant beans. They will all sit happily for a couple of days until they will be reheated for my guests.
Man-cooking starts with fire (barbecues being its apex), sharp knives, carefully selected ingredients and, importantly, recipes and timing. A perfectly cooked joint of roast beef, a swordfish barbecue, or the kind of elaborate products that ‘master’chefs prepare in cookery programmes on TV are standard man-cooking fares.
Maybe the word ‘chef’, in opposition to mere ‘cook’, gives an indication of the spirit of man cooking which has some parallels with military campaigns. The deployment of ingredients, the tactics and strategies, the critical timing of the assault and, especially, site of a kitchen as a battlefield following a man-cooking session all evoke military campaigns. When several people are engaged in cooking together, man-cooking calls for a hierarchy, encouraging strong authoritarian tendencies in the ‘chef’ who issues orders and takes no prisoners, as is daily seen with various celebrity chefs.
Man-cooking is high-anxiety cooking. It generally does not forgive mistakes and food preparation constantly courts disaster – overcooking, undercooking, overspicing, missing out a critical ingredient or overindulging in another one can all be fatal and irrecoverable. Maybe I would go further and suggest that the chef’s anxiety in sometimes reflected in his or her diners who must be sitting, prepared and ready when the dish is prepared.
As with many archetypes, there are undoubtedly hybrids, dishes and cooking practices that include elements of both. One of the happiest hybrids in a collaboration between a man-cooking partner and a woman-cooking partner preparing a common meal, when the latter must always respond to the time-critical calls of the former. Man-cook occupies himself with the barbecue while woman-cook prepares the potatoes, the salads, the rice and/or whatever else is needed.
I have had many happy sessions with male and female friends cooking together. In the majority of these cases (you may have guessed), I tend to do the woman-cooking while my friends, male or female, do the man-cooking. But in general, I would say that many of the best man-cooks among my friends are female while most the good woman-cooks among them are male.
It is now time to finish this post as my dishes must come out of the oven I pause briefly. I am happy with the result of a few hours woman-cooing. All the same, I think that it is time to sharpen my kitchen knives which I have let go seriously blunt over the past few months. No man-cook would tolerate such sloppiness!
Source: yiannisgabriel.com