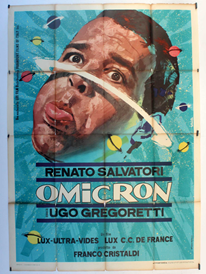 Word of the week: Omicron

Were you one of the thousands of people who, at the start of the coronavirus pandemic, decided to learn a new language? Well, congratulations: You’re now learning Greek! Or at least the Greek alphabet.

The highly contagious Delta variant, named after the fourth letter of that alphabet, was first identified in India in October 2020 and quickly spread around the globe. And we learned last week that yet another troubling Covid variant had emerged in South Africa. It was named after the 15th letter of the Greek alphabet: Omicron.

How did we jump from fourth letter to fifteenth? The New York Times explains:

There are now seven “variants of interest” or “variants of concern” and they each have a Greek letter, according to a W.H.O. tracking page.

Some other variants with Greek letters do not reach those classification levels, and the W.H.O. also skipped two letters just before Omicron — “Nu” and “Xi” — leading to speculation about whether “Xi” was avoided in deference to the Chinese president, Xi Jinping.

“‘Nu’ is too easily confounded with ‘new,’” Tarik Jasarevic, a W.H.O. spokesman, said on Saturday. “And ‘Xi’ was not used because it is a common last name.”

Coincidentally, I had recently learned something interesting about “omicron.” I wish I could remember my source—radio? podcast? audiobook? definitely some kind of audio—but it was unrelated to the pandemic, and it was a so-obvious-how-could-I-have-missed-it moment.

Here it is: There are two o’s in Greek, omicron and omega. Omicron is a “little” or “short” vowel, and omega is “big” or “long.” O-micron and o-mega. Get it?

At one time omicron and omega had distinct pronunciations, but no longer. By the way, omicron has two correct pronunciations in American English, both with the stress on the first syllable: AH-mic-ron or OH-mic-ron.

Omicron is just one more letter in the Greek alphabet. But it’s a proven fact that *sounds* more badass and science fictiony than most other Greek letters.

Maybe “Omicron” sounds badass because it evokes omen or ominous or even omnipotent (a lot of people think the word has an extra N: omnicron).

No, Autocorrect, it is “omicron” not “omigod.”

“Omicron” sounded science-fictiony enough to serve as the title of a 1963 Italian sci-fi parody in which “an alien takes over the body of an Earthman in order to learn about the planet so his race can take it over.”

Just one of the wild posters for Omicron. Our hero does look like he’s suffering from a virus.

Word of the week: Omicron