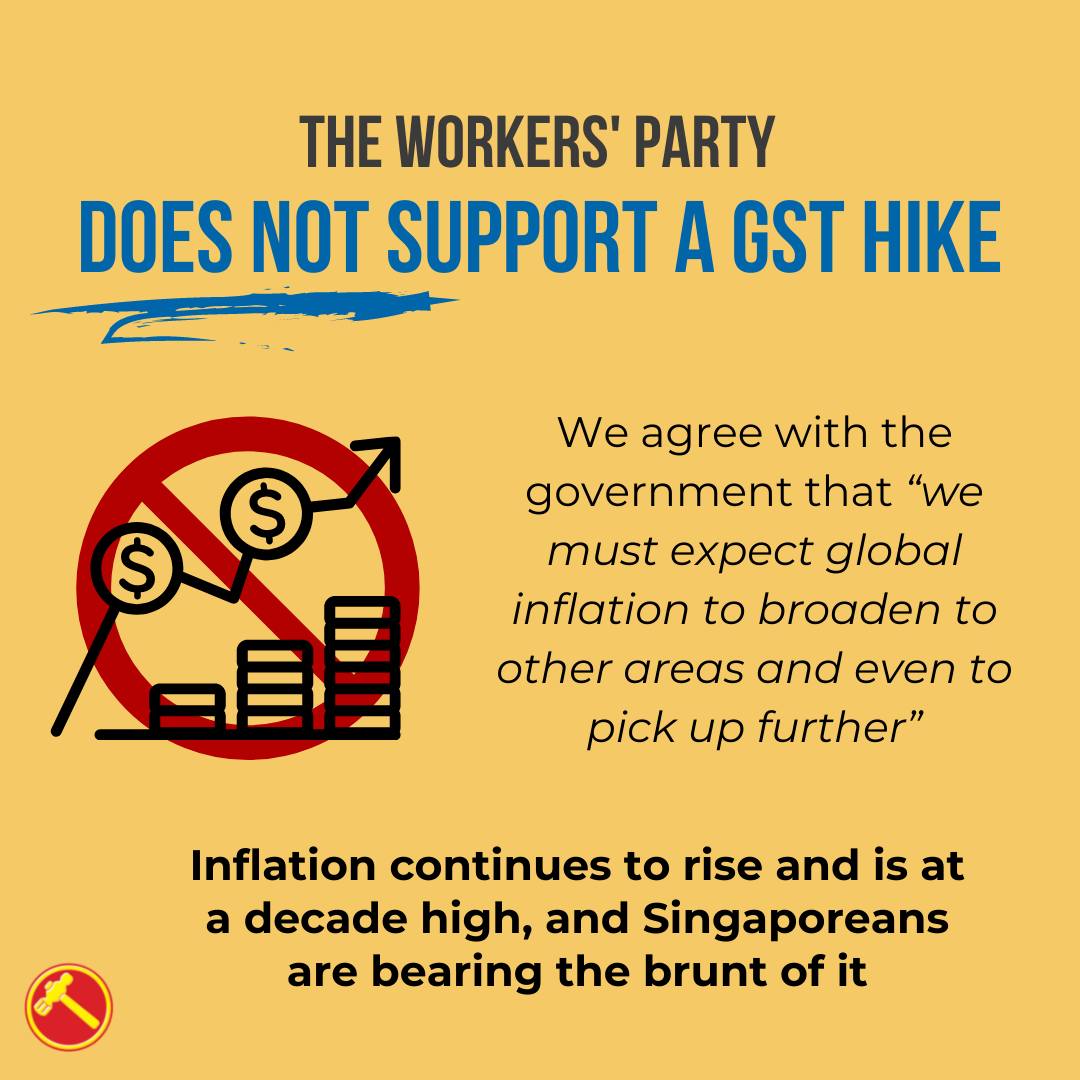 Earlier this week, Deputy Prime Minister (DPM) Lawrence Wong announced that Singapore will proceed with the GST hike as planned.

GST Hike To 8% In 2023 Will Proceed As Planned, Lawrence Wong Says Move is Necessary

This was to address concerns by Singaporeans amid rising inflation and the oncoming recession. Citing the increasing spending needs of citizens, DPM Wong said the hike to 8% GST in 2023 and then to 9% in 2024 was necessary.

The Worker’s Party (WP), which previously opposed the GST hike during the Budget Statement 2022, reiterated their stance.

However, they also mentioned their approval of the S$1.5 billion support package which Parliament proposed to assist citizens.

In a Facebook post on Wednesday (22 Jun), WP emphasised their stance toward the GST hike especially in light of the current economic situation in Singapore.

In a series of visuals, WP noted that,

Inflation continues to rise and is at a decade high, and Singaporeans are bearing the brunt of it.

The party will thus continue to oppose the GST hike as they did during the Budget Statement 2022.

To support their position on the GST hike, WP cited research analysts, all of whom have reportedly stated that Singapore’s overall inflation is expected to hit 5%. This is up from 3.6% in a previous survey which the Monetary Authority of Singapore (MAS) revealed.

Instead of the GST hike, WP will be suggesting alternative measures of revenue generation such as wealth taxes or raising the reserves contribution ceiling. 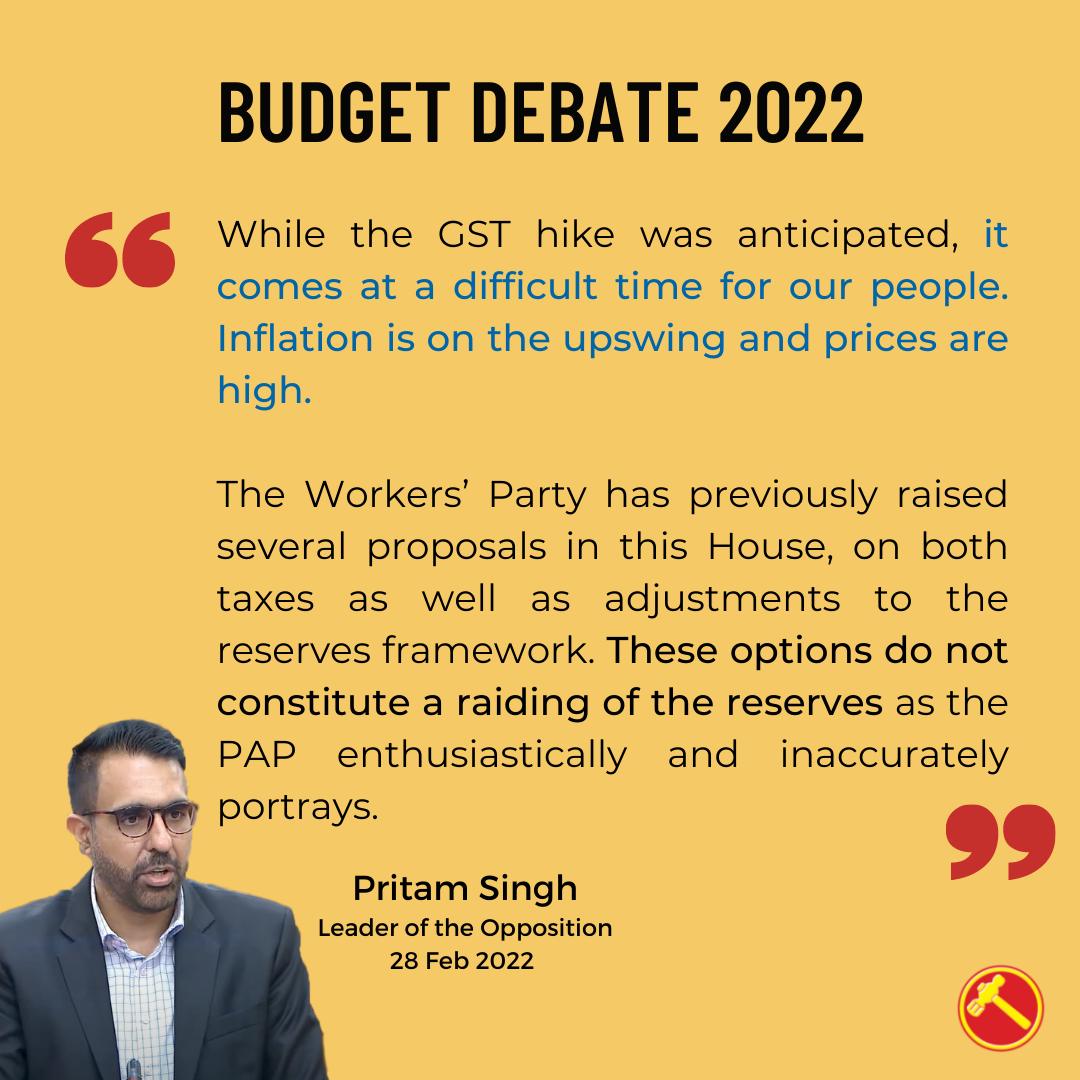 WP and Opposition Leader Mr Pritam Singh proposed these measures during the Budget Debate 2022, which the party claims the People’s Action Party (PAP) inaccurately portrays as a raiding of Singapore’s financial reserves.

DPM Wong addressed these proposals as well on 3 Mar. He stated that the government has provided a significant number of packages to assist households cope with the GST hike.

However, the WP has also shown support for one of the measures that will be put into effect by the Government this year. Referring to the S$1.5 billion support package, WP acknowledged that it provides “some short term-relief to households”.

DPM Wong brought up the package at his conference on 21 Jun, asserting that it will prevent households from feeling the pressure of the GST hike for at least five more years.

However, WP also said that the Government formulated the package at a time when they assumed local financial conditions to be much better than it is at present.

As such, a GST hike at such a time is still not something they can agree with.

An alternative but perhaps necessary view of the GST hike

As inflation continues to rise with a possible recession looming, WP’s view, which has remained constant, is certainly understandable.

It arises out of the need to support Singaporeans during these tough times. As such, it is heartening for them to continue raising pertinent issues, as there can be limitations to the support packages in place.

However, it must be noted that use of the reserves are only for exceptional circumstances.

We can certainly look forward to the next Parliamentary session and anticipate the outcome of WP’s counter proposals.

Have news you must share? Get in touch with us via email at news@mustsharenews.com.