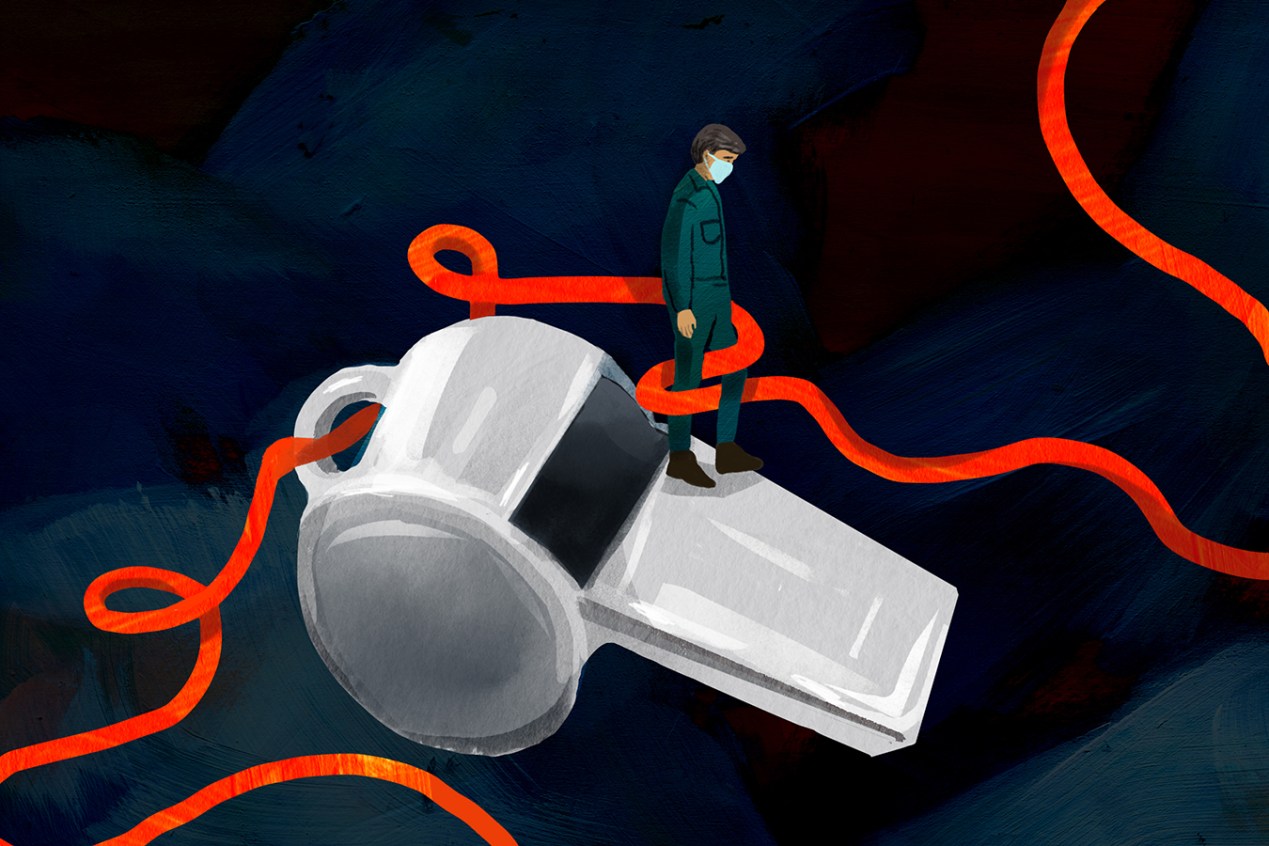 This story also ran on Fortune. It can be republished for free.

When COVID-19 began making headlines in March, Charles Collins pulled out a protective face mask from the supply at the manufacturing company in Rockaway, New Jersey, where he was the shop foreman and put it on. The dozen or so other workers at the facility followed suit. There was no way to maintain a safe distance from one another on the shop floor, where they made safety mats for machines, and a few of the men had been out sick with flu-like symptoms. Better safe than sorry.

Management was not pleased. Collins got a text message from one of his supervisors saying masks were to be used to protect workers from wood chips, metal particles and other occupational safety hazards. “We don’t provide or for that matter have enough masks to protect anybody from CORVID-19 [sic]!” If workers didn’t stop using the masks for that purpose, the supervisor texted, “we’ll have to store them away just like the candy!”

“I was shocked,” said Collins, 38. “They weren’t taking it seriously.”

Shortly after that, Collins left for a planned vacation. When he returned a week later, the company told him to quarantine at home for two weeks because he’d been traveling.

But when the quarantine ended, Collins didn’t want to go back to work. Co-workers, he said, told him that recommended safety measures such as wearing masks and maintaining social distancing hadn’t been implemented. When he told human resources that he feared becoming infected and endangering his mother and his 8-year-old nephew who live with him, he said, he got an ultimatum: Return to work or resign.

Collins stayed home and says he was fired. He hired a lawyer and filed a complaint in the Superior Court of New Jersey under the state’s whistleblower law, the Conscientious Employee Protection Act. The law prohibits employers from firing, demoting or otherwise retaliating against workers who refuse to take part in activities they believe are incompatible with public health and safety mandates.

As many employers, with the strong encouragement of the Trump administration, move to bring employees back, a growing number of workers are resisting what they feel are unsafe, unhealthy conditions. In recent months, a few states have passed laws specifically aimed at protecting workers who face COVID-related safety risks and retaliation for speaking up about them. Some states, like New Jersey, have whistleblower protection laws already. But advocates say stronger federal protections are needed.

The Occupational Safety and Health Administration, part of the U.S. Department of Labor, is responsible for enforcing 23 federal whistleblower statutes that protect workers from retaliation if they report workplace safety violations, among other problems.

But according to a new analysis, the agency isn’t up to the task. The National Employment Law Project, a workers’ advocacy and research group, found that of 1,744 COVID-related retaliation complaints filed with OSHA between April and mid-August, 20% were docketed for investigation and 2% were resolved. More than half were dismissed or closed without investigation.

“Even before COVID, workers had a really bad track record of getting any justice for their concerns if they were retaliated against,” said Debbie Berkowitz, director of the worker health and safety program at the National Employment Law Project and a former senior OSHA official.

The numbers are growing. Whistleblower complaints filed with OSHA increased by 30% between February and May, to 4,101, according to an August report by the Department of Labor’s Office of the Inspector General that criticized the agency’s handling of the complaints.

Nearly 40% of the complaints — 1,618 — were related to COVID-19, the report found, filed primarily by workers who claimed they were punished for reporting workplace safety violations. Those could include, for example, not having appropriate personal protective equipment or sanitation materials, or a lack of social distancing on the job.

While complaints rose, the number of whistleblower investigators decreased from the previous year, according to the report. The average time it took to close an investigation at the end of March was roughly nine months.

Worker whistleblower protections under the Occupational Safety and Health law are “incredibly weak” compared with whistleblower statutes that protect employees who report other types of wrongdoing, Berkowitz said. If OSHA dismisses a complaint, workers have no right to appeal the decision, and once they file a complaint with OSHA they aren’t permitted to take their case to court on their own, she said.

Consumer advocates would like to see those provisions changed.

Advocates have urged OSHA to adopt mandatory COVID safety standards for workplaces, but the agency has declined to do so, maintaining that its “general duty clause,” which requires employers to maintain a workplace free from hazards likely to cause death or physical harm, is sufficient.

“The Administration has remained committed to providing the Whistleblower Protection program with the resources it needs to fulfill its mission,” a spokesperson for the Department of Labor wrote in an email to KHN. “In fiscal year 2020, OSHA asked for and received five new full-time employees and requested an additional ten in the President’s budget for fiscal year 2021.”

If workers don’t pursue a whistleblower complaint through OSHA, they can file a state lawsuit claiming “wrongful discharge” or use a state’s whistleblower law, as Collins did.

Juan Carlos Fernandez, the Morristown, New Jersey, attorney representing Charles Collins, said he’s seen a significant uptick in inquiries from workers about safety concerns in recent months. Before the pandemic began, he typically received one or two such calls per month. Now, he gets three or four a day.

Many callers say they were terminated after they asked for protective equipment on the job, Fernandez said. Others had asked for time off to care for a family member or a child whose school had closed because of COVID-19 and then were told not to come back to work.

In addition to reporting safety violations, Collins’ lawsuit claims, he was fired for asking to take time off. Under the federal Families First Coronavirus Response Act, employees are generally entitled to two weeks’ paid leave if they’re quarantined, and another two weeks’ paid sick leave at two-thirds pay to care for a child whose school has closed, as well as expanded family and medical leave. Collins has cared for his nephew since his sister died two years ago in a car accident. His nephew’s school closed in March because of COVID-19.

Collins said his employer, ASO Safety Solutions, paid him for only the first week of his company-ordered quarantine. Any additional time off would come out of his accrued sick and vacation time, he was told.

ASO Safety Solutions didn’t respond to requests for comment, nor did the law firm representing the company.

In his response to the complaint submitted to the court, the lawyer representing the company denied that ASO had retaliated against Collins for whistleblowing, asserting he had resigned. The response, by John Olsen, with Ferdinand IP Law Group, also said that the provisions of the Families First Coronavirus Response Act do not apply to the company. The lawyers have exchanged requests for discovery, Fernandez said, which should be answered in the next several weeks.

A few states and cities have stepped in to help whistleblowers. Virginia was the first to put in place statewide workplace safety standards related to COVID-19, spurred by concerns from workers in poultry plants, said Rachel McFarland, a staff attorney at the Legal Aid Justice Center in Charlottesville. The standards include specific provisions protecting workers from retaliation for raising safety concerns or refusing to work in a location they believe is unsafe.

Colorado and the cities of Philadelphia and Chicago likewise passed laws prohibiting employers from retaliating against workers who raise COVID-related safety concerns, refuse to work in unsafe conditions or take time off to minimize the transmission of the virus.

But these laws are the exceptions, said Brent Newell, a senior attorney at Public Justice in Oakland, California, who has represented the interests of workers in meatpacking plants. “Many states haven’t done that and won’t do that,” he said. “For the federal government to put it on the states to protect workers is wholly and fundamentally inadequate.”

Kaiser Health News (KHN) is a national health policy news service. It is an editorially independent program of the Henry J. Kaiser Family Foundation which is not affiliated with Kaiser Permanente.

This story can be republished for free (details).