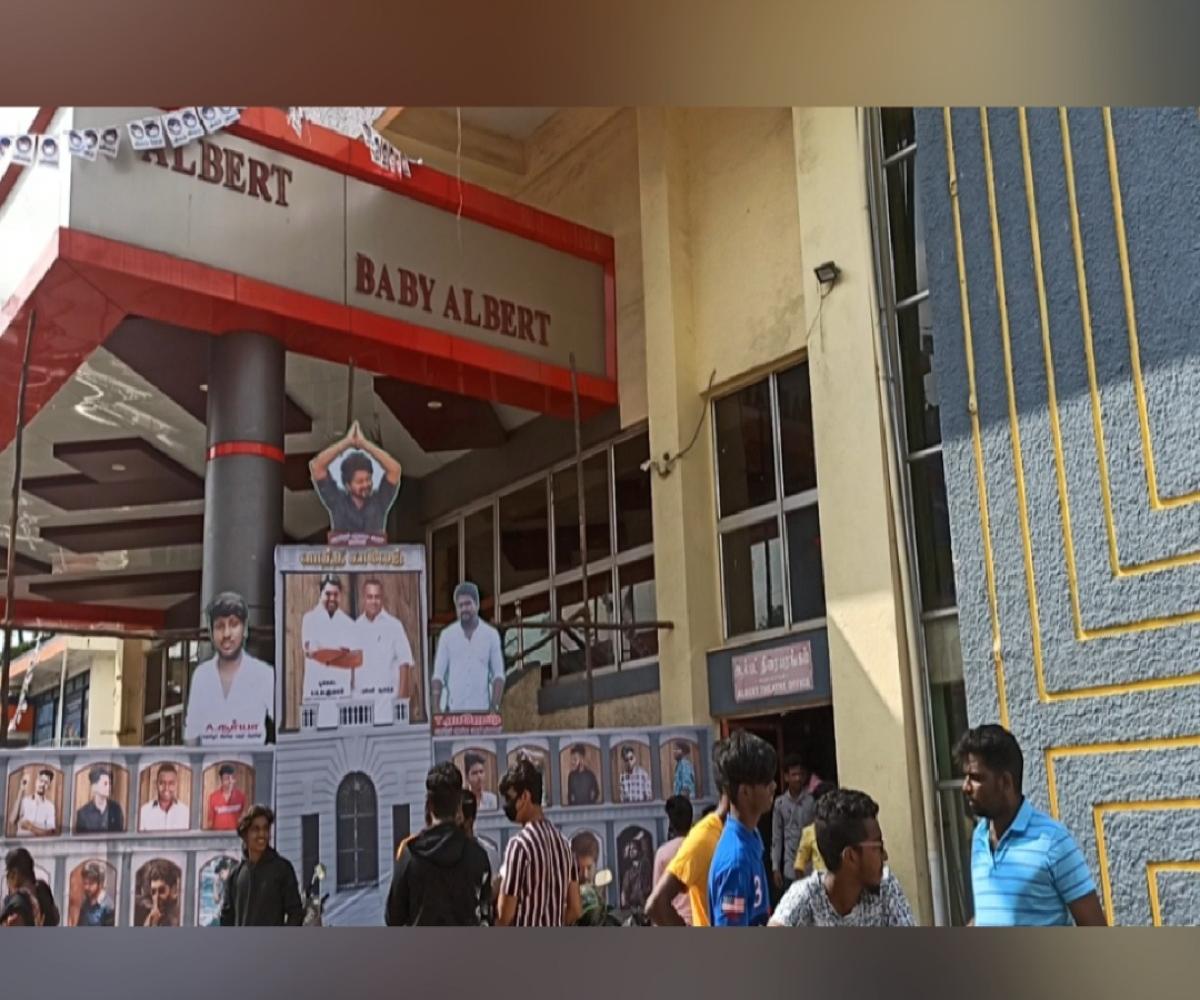 'Master' Pongal: How FDFS at a Chennai theatre felt

Kollywood
At 7.20 am in Albert Cinemas, just a few minutes ahead of the first screening, the fans lit a saravedi and shouted famous Thalapathy dialogues before entering the theatre complex.
Bharathi SP

'Verithanam' is a word that Vijay fans love. And it was on full display at the electrifying scene at Albert theatre complex in Chennai, an ordinary building next to the Egmore Railway Station transformed by the energy of dedicated fans. Nothing short of a double dhamaka, Master, starring Vijay and Vijay Sethupathi, hit the screens on Wednesday, bringing an end to an eight-month wait for fans. The film was originally supposed to release in April last year but was pushed due to the coronavirus pandemic. However, Pongal is a coveted day at the box-office in Tamil Nadu and the film releasing on Bhogi Pongal is a joyous occasion to fans who've dubbed it as 'Master' Pongal.  A Bhogi morning is usually marked by the sound of drums from the neighbourhood or calls to burn old calendars. But, for movie buffs, "Vera mari, vera mari" was the chant that resounded in their ears. Thousands of Vijay fans woke up early with an adrenaline rush to see their Thalapathy onscreen again. At 7.20 am in Albert Cinemas, just a few minutes ahead of the first screening, the fans lit a saravedi [cracker] and shouted famous Thalapathy dialogues before entering the theatre complex. But, there was a restraint to their actions. The whistles were fewer this time and when asked, the fans said, “Thalapathy has asked us not to whistle and to follow COVID-19 norms." Most of them were seen wearing masks.  The excitement was evident on their faces. Once they entered the theatre after following COVID-19 protocols, it was a goosebumps inducing moment for fans to see the credits for 'Thalapathy Vijay' and 'Makkal Selvan Vijay Sethupathi' back to back on the big screen. They had waited for this for nearly a year and the cheers and yelling that started at the beginning of the film did not die down until the end of Vijay's introduction scene.  But it wasn't just the audience inside that was expressing their delight. Those who did not manage to get a ticket still came to the spot to "feel the vibes". Many fans took selfies with every poster of the actor at the venue. Since the theatre complex did not prevent anyone from entering, irrespective of whether they had a ticket or not, the fans were allowed to freely click their pictures with the posters put up by Vijay's fan clubs. Interestingly, at 8 am, three people arrived at the now calm Albert complex as the first show began and the audience became involved with the film. But they were not exactly late for the film.  “We already saw the FDFS (First Day First Show) in Rohini Cinemas and came here just to attend the celebrations since there are a few more hours for our next Master show at noon.” Ravi, one of the three fans, attended the celebrations in Rohini Cinemas at 3 am, a time which may be too early even for roosters but not Vijay fans on the day of a release. Three theatres — Rohini, Kasi and Vettri — were vibrant at 3 am since the crew and a few actors also joined the audience for the FDFS shows, he said. But despite rumours that Vijay would also be attending some of the shows, he was not to be seen. "I saw Lokesh Kanagaraj (director), Malavika (heroine) and even Anirudh (music director) at the Rohini complex. They saw FDFS along with us at 3 am and it was just electrifying. However, Albert is the place for mass celebrations, so I’m hopeful that the celebrations will pick up soon," said Ravi. Calling someone who was watching the FDFS at Albert, Ravi then told TNM and his friends that the celebrations would begin only after the first show ended, at around 11 am. The three of them soon left the place, presumably to celebrate elsewhere. Apart from the legion of fans, there was also a police team patrolling the area, and a fresh batch of police personnel, this time with more women officers, reached the theatre complex. By 9.30 am, many more people started coming to the theatre to book their tickets. The queues grew long, with increasing anticipation about the celebrations and discussions on bringing banners and cut-outs of Vijay to the complex.  The only time there was silence was when a team of police officials went into the theatre complex to conduct a surprise check while the show was on. This 'kutti story' about Master release cannot be complete without a befitting ending. At 10.30 am, just a few minutes before the end of the show, fans who were leaving the screening expressed a flood of emotions. Their wait had been worth it, they said. They were enthralled by the sight of their favourite heroes onscreen and their enthusiasm echoed down the streets. Of all Pongals so far, this one was the Master, they said.
Source: thenewsminute.com

'Master' Pongal: How FDFS at a Chennai theatre felt