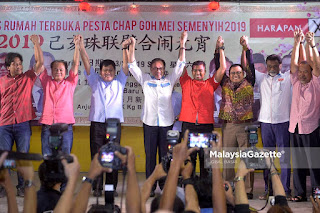 
Dato Seri Anwar Ibrahim came to Semenyih for the by-election campaign yesterday, Saturday February 23rd. It is the 8th day of campaign which will end on midnight March 1st.

His presence at two Chinese areas will certainly be a booster in terms of presence for the PH campaign and to get Chinese voters to remain supportive of PPBM as their assemblymen.

It helps dispel the rumours and send a message that all fine within the PH fold.

PPBM wants Mahathir to stay beyond the "gentlemen agreement" of 2 years but the full 5 year term. In the meanwhile, their campaigner could claim Anwar is still with PPBM and deny rumour he will initiate a vote of no confidence against Mahathir.

Say what they want but Joceline Tan's column today described an eye-to-eye situation remeniscence  of the US and USSR in the Cuba missile crisis. Between Mahathir and Anwar, the first to blink could determine the winner or loser.

However, Anwar's campaign is not reaching out to the Malay areas yet. Otherwise, PPBM must win by at least 4,000 votes majority.

Malay area will be where PPBM needs all the help. Their Election Direction, one Tan Sri Abdul Rashid Abdul Rahman seemed to have no idea of how to run a campaign. The candidate Aiman was sent to visit wet market at 11 AM.

Prof Redzuah of UNISEL (formerly the surveyor at UMCEDEL) claimed the survey favoured PH at 61%. This was echoed by Zuraidah Kamaruddin and yesterday by a PPBM supporter claiming it came from a former PKR candidate.

UMCEDEL or Merdeka Centre-linked surveys are not believable. However, it could be 61% if it was Hamidi A Hassan of PKR was running for PH. As far as Aiman from PPBM, it is not so sure yet.

PPBM not strong by their own

Anwar could boycott the by-election and let PPBM ran the campaign by their own but he did not do so.

After 8 days of campaigning, the arrogant PPBM leaders and members involved with the campaign should realise that they are minion to the might of BN. By coming down to campaign, Anwar hope to deliver the message into their head that they needed PKR and DAP.

Both Mahathir and Anwar faction on their own may not have the numbers to surpass 112 seats in Parliament. 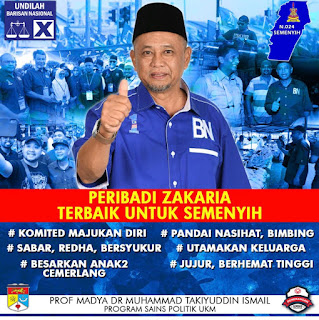 Without Anwar's PKR and DAP, BN's pleasant and respectable candidate, Zakaria Hanifia would get the UMNO and PAS votes plus extra from some swing in youth and non-Malay votes to win. 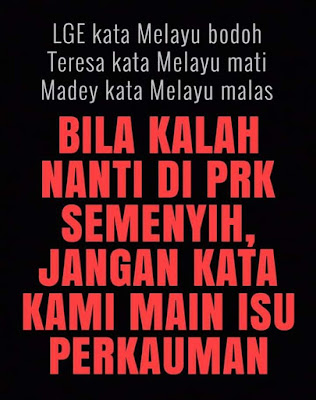 Anwar knows that when he reiterated PH will not play the race card.

Despite being a poodle to DAP, PPBM think they are the saviour of the Malay race. They hate DAP and PKR, but playing their more Malay ultra than UMNO card will not help them get the desired votes.

Anwar's speech last night was considered rather mild and defensive. It may not meant to turn the defensive PPBM campaign into offensive mode. He was arguing similar points of Lim Guan Eng and Mahathir, but in a more conciliatory and humble tone to the voters.

In fact, Anwar poke fun at PPBM by asking the entitled question and answered to deny Mahathir is till pursuing money for himself. Taking the exact quote from Sinar Harian:

However, he did not deny what he has said before of Mahathir. Social media's response is to remind him: 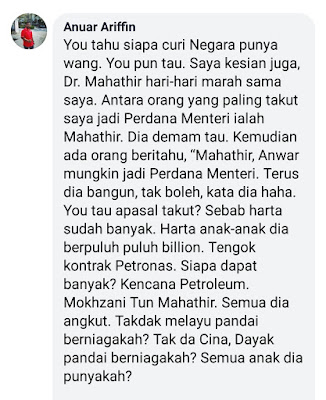 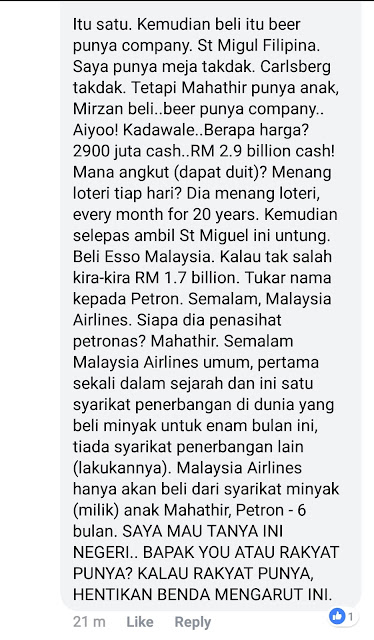 Anwar mentioned also about judiciary and citing RCI on alleged judiciary misconduct as commitment to reform.

Though agreed, Mahathir is reluctant and not comfortable with judicial reform. He spin it to look back at the decision on the lawsuit by UMNO group 11 (in which one is a member of the PPBM Spreme Council) and could serve as basis to de-register the UMNO 2.0 he established.

Talk is he intend to seize UMNO assets and turn PPBM as platform for UMNO 3.0. English translation of PPBM is practically UMNO.

It was Mahathir who wrecked the judiciary system to win the Team A vs Team B battle against Tengku Razaleigh in late 80s.

Anwar was rather defensive on the latest promise to abolish toll with congestion charges for few Klang Valley highways.

Its still non-committal promise and half measure on the Manifesto to abolish toll on privatised highways. No toll for the drunks plying the highway late night 11 PM till the wee hours of 5 AM next day 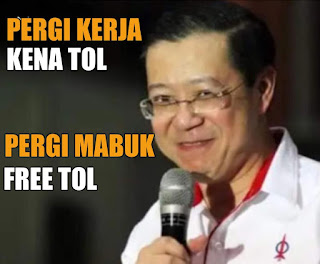 It is as big a laugh as the announced RM100 a year BSH for unmarried youth. 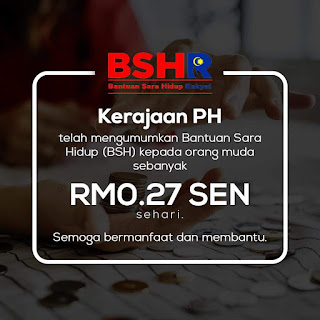 It averages 27 sen a day but made a joke by a recent petrol increase by 10 sen per gallon. 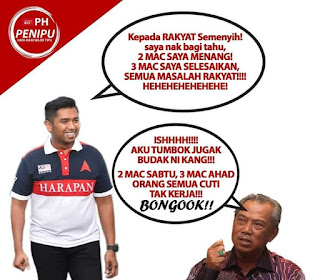 Aiman's promise to solve all of Semenyih problem the day after polling is also a laugh.

Again, to save PPBM's face, Mahathir will have to come down to campaign. Heard to be Thursday.

Hormone jab in the morning.

His first programme was at the Semenyih Open House for the Chap Goh Mei Festival 2019 at the Kampung Baru Semenyih Basketball Court which was also attended by the PH’s candidate Muhammad Aiman Zainali.

It was followed by two by-election campaign ceramah at PH’s Main Operations Room and at Taman Sri Jenaris.

Anwar’s presence helped cool claims by the opposition that the PKR and DAP were not helping the PH candidate from Parti Pribumi Bersatu Malaysia (Bersatu) in the campaign for the by-election.

“I came to help with strong and solid support for the PH candidate. Hopefully, there won’t be any issues used by the opposition,” he told the crowd at the ceramah.

“Don’t forget why all of you gave your support (to the PH) in the last general election. Because we don’t want the national wealth to be stolen again,” he said.

In his speech which was also inserted with Mandarin words, Anwar said the people must give their support to the national leadership to take Malaysia on the right path.

“Prime Minister Tun Dr Mahathir Mohamad is already 93 years old, does he want more money? Of course not, he wants to look after and preserve Malaysia,” he added.

Anwar also criticised the opposition which incited the people to stay away from the government by playing up the pledges made in the PH’s the 14th general Election (GE14) manifesto.

Anwar said it was not that the PH government did not remember the pledges made during GE14, but needed time to implement them.

“We remember the pledges, but the opposition raised them up, we have not even been one year (as the government), they ruled for 60 years, what did they do?” he said.

He also questioned the role of PAS which was seen as attacking him after the party forged cooperation with Umno.

“You are Muslims but can befriend those who steal, can lie, saying that I want to topple the prime minister,” he added.

In a ceramah at Taman Sri Jenaris, Anwar said Semenyih voters should see the Selangor government’s track record in developing the state.

“What has been achieved by the Selangor government has not done by any other state government under the Barisan Nasional,” he said.

In this regard, he hoped the voters would give Muhammad Aiman the mandate to enable the state government to implement various policies and programmes for residents in Semenyih.

The by-election was called held following the death of incumbent, Bakhtiar Mohd Nor from Bersatu, who died of a heart attack on Jan 11. — Bernama