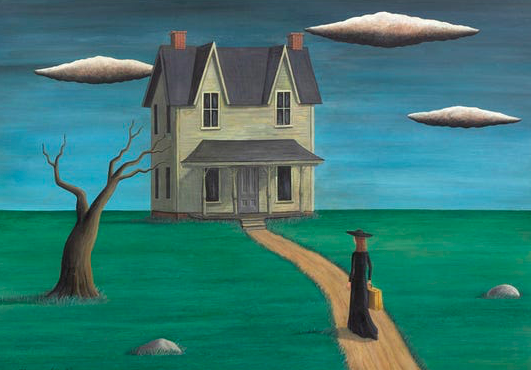 FBI agents raided the property of Traverse City artist Donald "D.B." Henkel this week in connection to an alleged art forgery ring that involved fake paintings being sold for hundreds of thousands of dollars to museums and collectors across the country, according to the Detroit News.

Henkel's East Hoxie Road property was raided Tuesday and Wednesday to look for evidence connected to the scam. Henkel is part of a group that allegedly sold paintings they claimed were undiscovered works by well-known artists including Ralston Crawford, George Ault, and Gertrude Abercrombie. The ring is also believed to have produced fake sports memorabilia purported to once belong to greats like Babe Ruth and Lou Gehrig, among others.

According to the Detroit News, Henkel's work was convincing enough to fool experts and persuade museums and collectors across the country to spend hundreds of thousands of dollars on his work. The scam was uncovered in part by the discovery of paint used in some paintings that didn't exist at the time the works were allegedly created. “These were very beautiful – fake or not," Elizabeth Feld, managing director of acclaimed art gallery Hirschl & Adler in New York City, told the Detroit News. "Whoever did this is quite an accomplished artist — just not the artist he or she purported to be.” The gallery spent about $500,000 on paintings linked to the forgery scheme, according to the newspaper.

Henkel is well-known in the Traverse City and Michigan arts scene. He created both the 2005 and 2008 official National Cherry Festival commemorative prints, according to the festival's website. Henkel has also been a five-time participant at ArtPrize. In a 2012 ArtPrize artist profile, Henkel described himself as “a nice guy with a bad temper, not an outspoken kind of person.” The artist - who attended Arizona State University, Kent State University, and the University of Wyoming - described art as being "different things to different people...it should create some type of feeling, whether good or bad...it should make you talk and communicate."

In that profile, Henkel also said he wasn't motivated by money. "Family comes first," he said, "and I’m not into money that much. If I have a roof over my head and food on the table…that’s basically all I need.”

Pictured: "Coming Home," a fake work purportedly created by Gertrude Abercrombie. The piece sold at action for $93,750 in 2019.