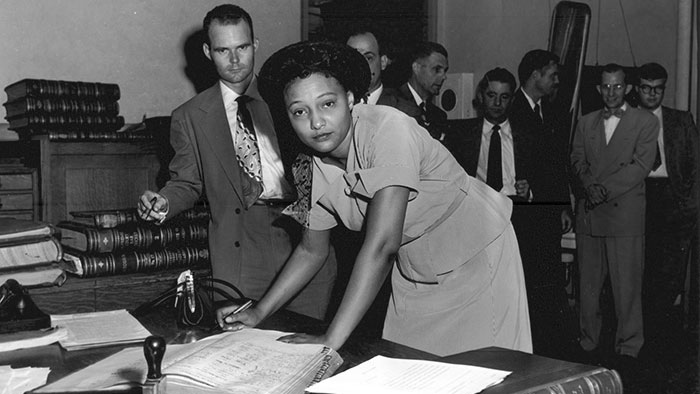 Ada Lois Sipuel Fisher and the Road to Brown v. Board of Education 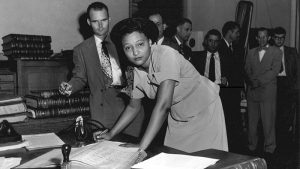 On the north side of the University of Oklahoma campus, marble steps lead up to a limestone-clad law school. Few would guess that in January 1946, as Ada Lois Sipuel Fisher walked up those steps, hers would be the first to prime a nation and the U.S. Supreme Court for Brown v. Board of Education of Topeka.

No path for black students

Delegates quickly nominated the University of Oklahoma College of Law. Test cases take years to litigate and longer to enforce, and most fail. But Fisher knew “the cause was so right, so just” that she couldn’t refuse.

Fisher applied and was denied admission because of race. The NAACP filed a petition in an Oklahoma state court arguing that OU had denied Fisher equal protection.

The trial court denied the petition. Segregation in Oklahoma, like much of the country at the time, was written into its constitution under threat of criminal penalties should schools decide to integrate.

The NAACP appealed to the Oklahoma Supreme Court. Marshall argued that because no law school existed for blacks, Fisher’s rights had already been violated. The state’s highest court affirmed the lower court’s denial.

Then the U.S. Supreme Court took the case. On January 8, 1948, Fisher walked up the marble steps of the U.S. Supreme Court building. Four days later, the court returned a single-page, per-curiam decision. It said Fisher was “entitled to secure legal education afforded by a state institution.” The court ruled that the state must provide legal education for Fisher “in conformity with the equal protection clause of the Fourteenth Amendment and provide it as soon as it does for applicants of any other group.”

In a telegram, the NAACP called the ruling, “The furthest advance yet reached toward the principle that there can be no equality in a segregated system.”

However, if OU admitted Fisher, the school would violate the state constitution.

The Oklahoma Supreme Court therefore ordered that a separate school, equal to that of OU law, be established before the start of the term (at that point, the board had 12 days to comply with that order).

On January 19, 1948, the regents of higher education in Oklahoma created Langston University School of Law. However, after a year-and-a-half-long battle, in June 1949, the Oklahoma legislature amended its laws to allow black students admission if a program was unavailable at Langston. OU defied the state and, on June 17, 1949, admitted Fisher.

Fisher still faced severe indignities as a law student. She was forced to sit apart from the other students, alone in the back row. However, her admission into OU’s law school prepared both a nation and its highest court for what would become a landmark decision six years later. In Brown v. Board of Education, the court ruled that separate facilities were “inherently unequal.”

On September 23, 2019, OU celebrated the 70th anniversary of Fisher’s admission.

The post Ada Lois Sipuel Fisher and the Road to <i>Brown v. Board of Education</i> appeared first on ABA for Law Students.

Ada Lois Sipuel Fisher and the Road to Brown v. Board of Education