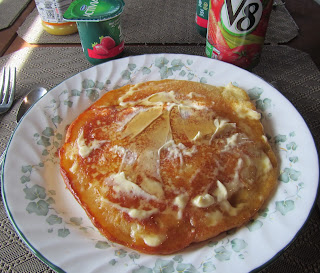 Our Location today is at the La Posa South, LTVA, Quartzsite, Arizona.
Click on the pictures to Enlarge
Neither of us were taking any chances of having a restless night’s sleep last night. Part of our problem has to do with our having Sleep Apnea which has Insomnia as a Side Effect. We both slept in slightly and were feeling quite refreshed. 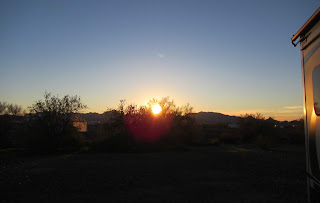 Looking outside at Ken’s Flags hanging limply had us puzzled especially since the entire sky was covered with veil-like Cloud covering. There were only a few of the many Blogs that we follow that had written so our reading went fairly quick. 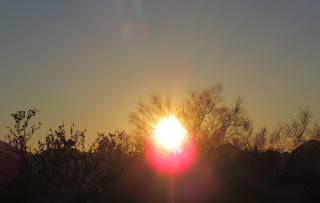 I did spend a bit of time answering an E-Mail from Marlenefrom the blog Marlene and Benno’s Odysseys on Land and Water. Since our announcement that we were adding a Wind Generator to our Battery Charging System they have been giving me ideas including those from someone in the park they is presently that is using the same system. That person has kept his system very portable so even his monitoring its performance was kept simple. Having already ordered the Meters that I felt would do the task I explained that and why. They have also given me Safety Tips to watch for when the Wind is doing its job. Again Thank You Marlene and Bennofor the information that you have provided me with. 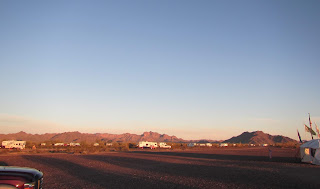 We made plans to go to Herb’s Hardwarein Quartzsite so I could accomplish a minor modification to our Macerator Discharge Hose. That meant getting an earlier start with the Indoor Chores in order to get going before lunch. It was a good thing I did that because with an unexpected knock on the door I had visitors. 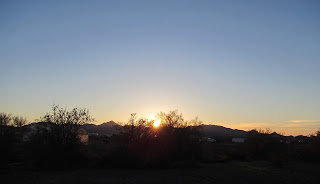 It was our Neighbour Ken and his friend Les were both very curious on how our Wind Generator was working. It was like Magic as they spoke those words a slight Breeze from the north started blowing causing it to start spinning and fluttering Ken’s Flags. Showing them the Controller in the Basement they were amazed how small it was. This was where I found out that they were both Electricians during their time in the Military as well as their Civilian Lives. When I spoke about the Monitoring System that I planned to set up and how it will be wired they were impressed. They’ll be back to check it out this coming week when I hope to have it installed.

Since we still wanted to go to town and it was nearly 1:00 Kathy made us each a Pancake for lunch along with a Juice and Yogurt Cup for dessert. As soon as the dishes were cleaned and put away we headed out the door. 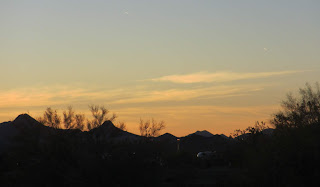 It was a pleasant drive with little traffic but when we arrived at Herb’s we had reality check, today was Sunday and they are not open on Sundays. Thinking that I could work on something else we drove around to the new K&B Tools building on Main Street. Needing to make an adjustment to the Wind Generator TowerI needed to get a small piece of Conduit but didn’t want to get a long section. Spotting a small Three Foot Piece on the ground next to their Material Rack I was ready to go and less then Half the Price than I expected to pay. 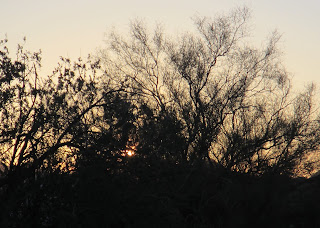 Just getting out for that ride had us both feeling better but I needed to do something for Me. While Kathy indulged herself by doing some reading I went outside and did some Weight Lifting using the Dumbbells that we carry in the Basement. It was only Thirty Minutes but it felt wonderful getting rid of a lots of aches and pains. This will also help me to sleep better at night. 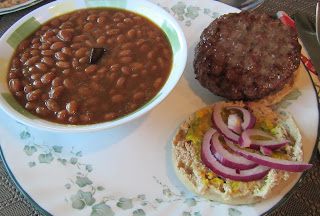 For supper I grilled a couple of Hamburgers on the Weber while Kathy warmed up some Baked Beans and used English Muffinsfor the buns. 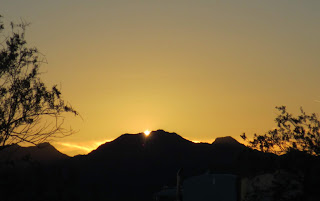 After getting a few Sunsetpictures where there were no CloudsvisibleI noticed that the Wind Generatorwas not turning. Checking The Weather Networkthey were showing a Zero MPH Wind. Guess I’ll be making my adjustment tomorrow. Thank you for following along and feel free to leave a comment.
Be Safe and Enjoy!
It’s about time.
Krackers
Words of Inspiration
Be careful about reading health books.
You may die of a misprint.
Mark Twain, American Writer
Source: ricknkathyrousseau