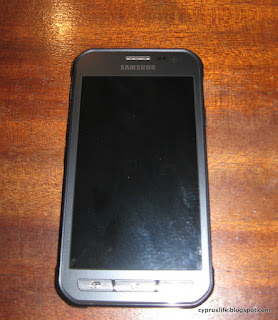 Back in September 2018, I wrote about starting to use a basic smartphone. I called it my 'slightly intelligent' phone as it didn't actually do all that much. That was good, I thought, as I had resisted the idea of a smartphone for a long time. But being able to see photos of the grandchildren via Whatsapp was a big motivation to acquire one, and to start using it as a phone when my old phone (which was not at all intelligent) was becoming unusable.

I was surprised how much I liked it. It didn't have room to install much, but my son put an extra chip in it, and I was able to download an app for gmail, and Facebook 'Lite', and a few other things. When I travelled briefly to the UK a year ago, to see the family, I didn't take a computer; I was able to keep in touch with friends and Facebook via my phone.

What I liked most of all was being able to check email and Facebook updates quickly in the morning, before going out for a walk or having breakfast. Sometimes I'm anxious to hear from someone, or concerned about something, and in the past I would have turned my computer on - only to get distracted, possibly for hours. With the phone, I could check all I needed in about five minutes, and then get on with my day. I've reached the point where I don't usually turn my computer on until after lunch, meaning I get a lot more done in the mornings.

There were some disadvantages to such a basic phone, however. The main and most frustrating one was not having a camera on the front. Not that I wanted to take selfies; the problem was that trying to video chat with my grandchildren meant I had to stand in front of a long mirror in order for them to see me. We would try the computer, but the technology doesn't always work. So we would usually end up waiting for Richard, if he was out, so we could use his phone.

I was mildly disappointed that there was no way to instal a step-counter on the phone, and also found the poor quality of the photos on it a bit disturbing. I still have a camera and mostly use that. But when I go walking with my friend Sheila early in the morning, I don't usually take anything other than my house keys and phone.  There are a lot of flamingoes on the Salt Lake this year (over a thousand, we're told), but when I tried taking a photo with my old phone, the best of them looked like this:

Back in the summer, my family tried to persuade me to buy a better phone, and I did look at some options. But some were too big, and some were too heavy, and the ones that quite appealed (and which weren't horrendously expensive) had poor reviews.  So I decided not to bother.

However, Richard bought a new Android to replace the one he had been using for work which had become unreliable, switching itself off every couple of minutes.  He had hoped I might like one the same, but it was too big for my hands, and too heavy to feel comfortable.

In an idle moment I did some online research and learned that random turning off is a common feature of this kind of phone when the battery needs replacing; it swells slightly, and triggers the off button. I quite liked that phone - so we decided to order a replacement battery, to see if it could be made to work.

Our son brought it out with him when he came for a week over Christmas, and I agreed to try it. He moved my sim, and the extra memory chip, and put the new battery in.  It worked!  It was so much faster than my other phone! Installing the same apps was easy and quick! 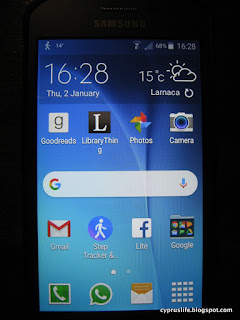 Yes, it really is only 15 degrees here at present, down to about 9 overnight.  Not warm at all.

The phone is bigger but not much heavier than my old one, and it has a camera on the front as well as the back. It also let me instal a step-counter, which I hope will motivate me to do a bit more walking. I'm not doing very well so far; this morning it was raining at 6.00am so I didn't go out walking with my friend. 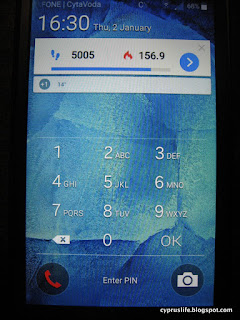 The pictures taken still aren't as good as my real camera, but they're a lot better than the other phone was.  Here's how the flamingoes looked on the 'new' phone when we walked early in the morning on New Year's Eve: 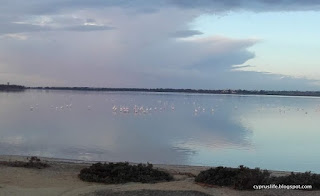 They're still not particularly clear in a photo this size, but much more obviously flamingoes if you click to enlarge the picture.

Within a couple of days, I was carrying the phone around with me everywhere. I'm still getting used to some of the functions, and am quite slow with it. I am not planning to use it for YouTube or even browsing, but I like the speed, and the quality, and the ease of use.

I passed my other phone to my friend, for her younger daughters to use when out and about. They have already done more with it than I ever managed to do.  No doubt there are far more features on my 'new' one than I am aware of, and I probably won't ever discover the majority.

But, as we start the 2020s (yes, I know, this is technically the last year of the previous decade, but still the first year of the 'twenties') I don't expect to return to using a non-smart phone.