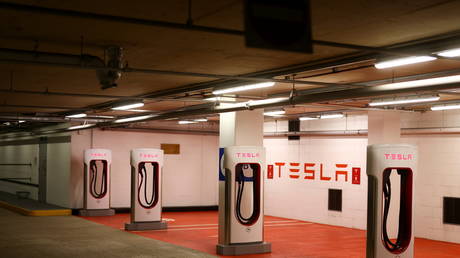 The Greta Reset: Welcome to the UK 2030 - the no petrol, no transport, no freedom of movement Net Zero future

Bringing forward a ban on the sale of new petrol and diesel-engined cars and vans from 2040 until 2030 by the UK government is an authoritarian exhaust-pipe-dream of a ‘solution’ to climate change.

The key point about the move to electric cars announced by Prime Minister Boris Johnson as part of his 10-point plan to make the UK carbon-neutral by 2050, is that it is more a signal of aspirational worthiness than a credible project. It is a barely disguised move by the UK government to show global leadership ahead of its role as host of next year’s COP26 climate change summit.

This woke virtue signalling would be hilarious if it did not have deeply worrying authoritarian implications for the future.

Here we have a government that has shown itself incapable of organising a piss up in a brewery during the Covid crisis (remember the PPE fiasco and the Track and Trace debacle), pledging to undertake a fundamental transformation not only of Britain’s transport future, but the infrastructure and energy overhaul needed to fuel this.

The scale of the challenge is enormous. For example, generating the electricity to power this revolution is gargantuan. In 2018, UK electricity generation was about 333 terawatt hours (TWh), almost none of which went to power electric cars. If all petrol and diesel used in cars and light-goods vehicles were banned, the UK will have to generate at least 343 TWh worth of electricity to compensate.

In short, to electrify Britain’s transport by 2030 means building enough power stations, and enough of a grid, to more than double the entire current capacity. I’d like to see the betting odds on this at my local bookie.

Beyond electricity there is the thorny issue of charging. Current electric vehicles have a claimed range of around 250 miles. This is fine for short journeys. But longer ones require more charging access points as well as faster charging times. At present, most electric car owners charge their cars overnight which assumes you have a drive or a reliable parking space you can charge at. Overcoming ‘range anxiety’ – a factor that is inhibiting consumers conversion to electric cars – means more subsidies and support, infrastructure investment. In short, more costs.

And this is another huge challenge. A beleaguered world car industry is in no position to halve the average price of an electric car. Conventional motorists payment of road and fuel taxes has been used, along with other tax revenues, to subsidise the purchases made by green car-buyers to-date. According to the Institute for Fiscal Studies, motoring brings in £40 billion per year (around five per cent of all government revenue), mostly in fuel taxes. If that taxation disappears, what will replace it?

These challenges suggest that the ability of governments and car manufacturers changing more than 100 years of combustion engine production to cater for an electric future within a decade, is just plain silly. Last year, for example, fully electric cars accounted for just 38,000 of the 2.3 million cars sold in the UK. A decade for electric cars to compete with the 92.6 per cent market share of petrol and diesel cars is a pipe dream. Yes, some hybrid cars will be allowed till 2035, and the motoring industry has been working towards this, but it is still a mammoth and unrealistic challenge.

There is no doubt that the civil servants in the Johnson administration can do arithmetic and can see this all doesn’t add up. But that’s besides the point which is to establish the fact that the problem of climate change resides in individual lifestyles. The point is to change behaviours and establish a new moral framework.

It is not about dramatic innovations that can drive down the cost of production and the cost of running them. If it were, the focus would be on industry rather than individual consumers. Electrifying heavy-goods vehicles, buses and coaches, would eliminate a hefty 7.6million tonnes of diesel per year and would require a lot less generating power, for example. Even this would be a stretch, but it is infinitely more doable than the current focus on the average consumer.

The real danger is that even a half-cocked attempt to realise this project will result in a two-tiered society: the rich who will breathe the rarefied air of the moral high ground versus the poor who will lose the freedom of movement, choice and autonomy.

While the pious greens will cycle and walk for leisure (while working from home), the rest of us will become Cubans, repairing our old and increasingly decrepit cars, waiting for the great and the good to declare another ‘Ten Year Plan’ for sustaining a zero-freedom society.

The Greta Reset: Welcome to the UK 2030 - the no petrol, no transport, no freedom of movement Net Zero future