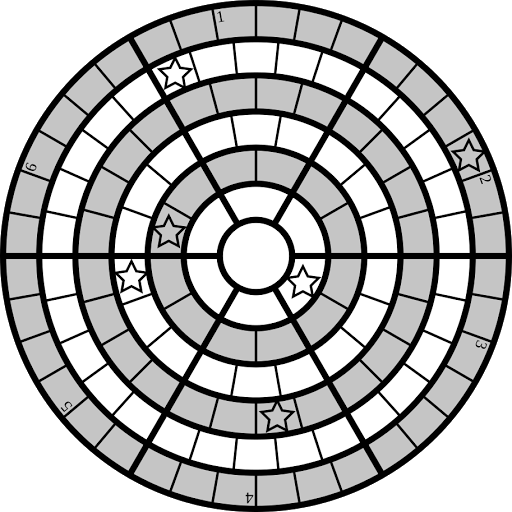 WORDY WEDNESDAY #314
FILL-IN CROSSWORD 8 (answer)
Here is the answer to this puzzle. If you still wish to solve it yourself, please go here for the normal version of the puzzle, or here for the easier version of the puzzle. Here's a list of people who solved it:
Cindy Heisler **
Mark Ballinger **
Bo & Becky Green **
Bryce Herdt **
Eric Maddy **
Kevin Orfield **
Ryan Faley **
Sam Levitin **
Stephen Potter **

WORDY WEDNESDAY #315
PENT WORDS 63 (hint)
As of this writing, 8 people have solved this puzzle. Haven't solved it yet? Here's an easier version. Send your answers to glmathgrant[at]gmail[dot]com within the next week to appear on the solvers list and be recognized for your puzzle prowess. Good luck, solvers!

WORDY WEDNESDAY #316
SECTION SIX 31
(click here for a PDF version)
This puzzle's grid has six rings and six sections. Each ring contains a series of words placed end to end, reading either clockwise or counterclockwise; all the words in a given ring will read in the same direction. Ring 1 (the outer ring) contains six answers that read clockwise; the starting spaces are numbered in the grid. Clues for the answers in the remaining rings are given in order, but their starting points and direction are for you to determine. The sections (separated by the heavy lines radiating from the center) will help you place the inner rings: in a given section, each ring segment contains all but one of the letters in the next segment outward. In other words, a section's outermost segment contains six letters; the next segment inward contains five of those six letters in some order; and so on, until only one of the original six letters remains.

Arrange the letters in the six starred spaces to form the final answer, a 6-letter word. 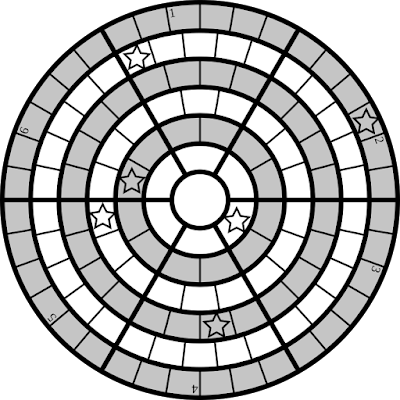 COMING NEXT WEEK. . .
* A puzzle about ulterior motives!

Submit your answers to glmathgrant[at]gmail[dot]com. Until next time, keep on living, and yappy solving!
Source: mathgrant