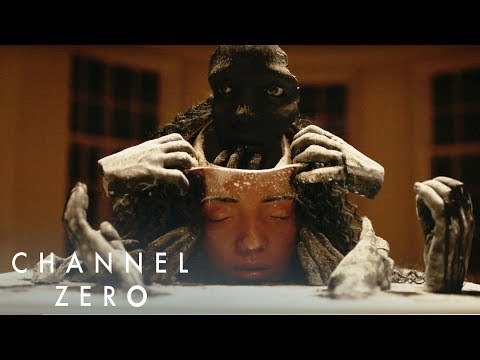 Why You Should Drop Everything and Watch SYFY’s Channel Zero

First things first.  None of us are really here to tell you what to do.  You’re probably an adult.  Hell, you probably feed yourself and maybe even make your own bed most days.  We’re proud of you – keep that shit up.

But if you’ve kept up with us over the years – then you already know what we’re here for.  We’re here to share our love of all things horror with you.  So what i’m getting at, is that if one of us is telling you that you should be watching/listening/reading/thinking-of-buying something… we’re not doing it because we’re your boss or because we’re making any money from it.  We’re doing it because we’re fans and we’re stoked and we really want you to be stoked with us.

To put an even finer point on things: WATCH CHANNEL ZERO ALREADY WHAT ARE YOU WAITING FOR!!?!?!

Yes, it’s on SYFY.  No that doesn’t mean it’s cheap garbage.  There’s very clearly money, creativity, and scads of talent involved in this series than in perhaps anything SYFY has ever done before.

It’s not a huge investment – each season is only 6 episodes.  Six concise, ingenious, brilliantly shot episodes – most of which will leave you staring at your TV wondering what you’ve just seen and who you can immediately talk with about it.  If you’ve got time for the next season of Stranger Things – and we KNOW you do – then you have time for this.

Each season is a completely different original story.  You read that right: ORIGINAL STORIES.  They are from the internet:  “Creepypastas” to be exact.  Max Landis executive produces this thing of beauty, and he’s not the only genre cred involved.

This shit is genuinely WTF creepy.  Things you’ve never seen before.  Season One included a deeply unsettling “tooth child”, a murderous children’s show, killer children, and a mofuggin cult too because why the Hell not? Season Two is better left unexplained – the title says everything you need to know going in.  Both seasons have included moments of pure terror and dread which would be completely at home in the darkest episodes of Twin Peaks.

It’s pitch black in both it’s sensibilities and it’s humor.  Had someone told this writer that they’d be nearly cry-laughing in terror while a character eats memories in the form of loved ones who morph of out ooze puddles on the ground… I’d likely have laughed you into the next week.  AND YET HERE WE ARE.

So trust us.  Trust me.  Treat Yo Self and find Season One.  Download that shit.  Watch it.  Love it.  Freak out over Season Two with us.  And then be excited because it’s already been renewed for Seasons Three and Four and DAMN WHAT A TIME TO BE ALIVE!  As long as no one makes me eat a memory-puppy.  Just no.  Ok?  No.

Why You Should Drop Everything and Watch SYFY’s Channel Zero