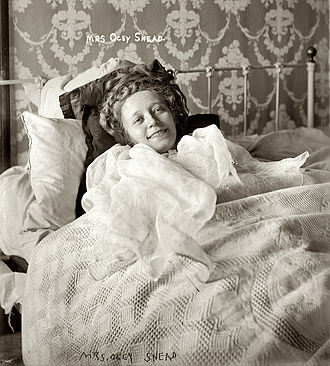 When Dr. Horace Simmons was called out to investigate the death of 24-year-old Ocey Snead on November 29, 1909, it seemed to be an obvious case of suicide.   At least, at first....

Not only was Ocey's emaciated body found naked and lying face-down in a tub of cold water in the East Orange, N.J. home where she had been living, but there was also a suicide note lying nearby.   The note, which was written in a firm hand, read, "When you have read this, I will have committed suicide.  Do not grieve over me.  Rejoice with me that death brings a blessed relief from pain and suffering greater than I can bear."

And she certainly had reason to kill herself.   Not only had her husband disappeared some time before (and presumed dead) but her infant daughter had recently died and her surviving son seemed on the verge of dying as well.    Everyone who knew Ocey reported that she had been visibly wasting away in the months leading up to her death but Dr. Simmons found the circumstances of the death to be highly suspicious.

First of all, there was the peculiar behaviour of Ocey's aunt, 57-year-old Virginia Wardlaw, who finally admitted that she had found the body earlier and had waited an incredible twenty-four hours before reporting it.   On asking Wardlaw why she had waited so long to report the death, the aunt simply replied that her niece had said that she didn't want to be disturbed.  The doctor also noted that the house where Ocey died was almost completely empty of furniture.   As for Wardlaw herself, the doctor took note of her bizarre appearance.    This included being dressed completely in black with a cape reaching down to her ankles and a veil covering her face.   Disturbed by all the questions he had concerning the young woman's death, Dr. Simmons went straight to the police and asked them to investigate.

When investigators tried to question Virginia Wardlaw, they found her to be completely uncooperative.   They also learned that Ocey Snead's relatives had been quietly taking out insurance policies on her life over the previous few years and had even gone into debt using the insurance policies as collateral for loans.   All told, the various policies on Ocey's life amounts to more than $30,000, a hefty sum in those days.   On looking into Virginia Wardlaw's colourful past, investigators found that she had been involved in a number of bogus real estate schemes with her sisters.  Some time before that, she had been discharged from her position as a headmistress in a prominent girl's school and reduced her to virtual poverty.  As for Ocey's "suicide note", police found that the handwriting didn't match letters previously written by the dead woman.  There was also the troubling fact that the note had been written in a firm hand while Ocey had been physically frail in the weeks leading up to her death.   Virginia Wardlaw was arrested as a material witness in Ocey Snead's death while investigators began looking at Virginia Wardlaw's two sisters.

One of these sisters, 61-year-old Mary Snead, was considered especially suspicious since she also happened to be Ocey's mother-in-law  (Fletcher Snead, Ocey's husband also happened to be her cousin).  Then, there was Ocey's own mother, 64-year-old Caroline Martin who had disappeared, along with Mary Snead, shortly after Ocey's body was found.   Mary was eventually tracked down to a basement apartment where she had been hiding with the aged mother of the three women.   As for Caroline Martin, she was discovered to be hiding out in a Manhattan hotel where her trademark black cape and veil (same as her two sisters) led to her being recognized.   All three women were then charged with first-degree murder in the death of Ocey Snead and, based on evidence provided by other witnesses, Caroline Martin was implicated as the mastermind of the bizarre murder scheme the three women had carried out.   Since all three women were dressed in the same bizarre fashion with long black capes and veils, they became known to the press as the "sisters in black."

In tracing the movement of the three women, detectives soon found another rented house in Brooklyn where Ocey had actually lived with her mother and aunts up to the time of her mysterious death.  Fletcher Snead had lived there for a while as while until he abandoned his pregnant wife in 1907.   Police actually managed to track him down to where he was living in Canada under the assumed name "John Lucas" but he was quickly ruled out as a suspect (he managed to disappear again soon afterward and vanished from history).

While the three women were awaiting trial at the Trenton Penitentiary, police managed to learn more about Ocey Snead and the tragic events that led to her death.   Believed to have been born in 1885 in New York City, Oceana Wardlaw Martin (later nicknamed "Ocey")  came from a long and eminent family that stretched back to the American Revolution.   Despite this illustrious background, Caroline Martin and her two sisters had fallen on hard times and were living in near-poverty by the time Ocey married Fletcher Snead in 1906.   The marriage had been conducted in secret because the family initially opposed the union though this changed with the birth of Ocey's first child.

When this first child, a girl, died just days after her birth, Ocey was devastated and the later disappearance of her husband, while Ocey was pregnant with her second child, caused her to sink into a "pitiable state", as her mother would later relate.  Caroline Martin also insisted that Ocey had become a morphine addict who regularly daydreamed of suicide.  As she would explain later,  Ocey had died due to an accidental overdose of morphine that Martin had given her daughter and she then placed her in the bathtub in an attempt to revive her.   Once she realized that her daughter was dead, she went into hiding.

But evidence provided by other witnesses painted a much more disturbing picture.   By all accounts, Ocey been a target of abuse by all three women, including her mother and this pattern of abuse stemmed all the way back to her childhood.   But things became even worse for Ocey in the years leading up to her death.   Already frail following the death of her first child, being abandoned by her husband and having to deal with a second pregnancy made her even more of a target.   Almost immediately after her second child was born, the three sisters spirited him away to a hospital where he later died.    The sisters then moved to New Jersey along with Ocey.    It was also around this time that Ocey's health began to fail and the sisters called in Dr. William Pettit who immediately diagnosed her as suffering from malnutrition.    After learning that his medical instructions weren't being followed,  he tried to protest but Caroline Martin and the others simply discharged him  (and failed to pay his medical bill).   Another doctor who had been called in even tried to sneak in food for Ocey but her mother and aunts put a stop to this as well.

Finally, the sisters called in Dr. Pettit and asked him to get Ocey to write a will as they believed she was dying.   They even offered to make him one of the beneficiaries of her life insurance policy in lieu of paying his medical bill.   While Pettit had been on the verge of calling in the police, the sisters had disappeared once more taking Ocey with them.   He would never see her alive again.

After Ocey Snead's death, Dr. Pettit came forward to provide additional evidence against Caroline Martin and the others.   Police also began investigating some of the other death linked to the family, including Caroline's husband Ocey's brother, Hugh (she had received sizable insurance settlements for both deaths) though no real evidence of murder ever surfaced in either case.    All that really remained was what to do about the three "women in black" awaiting trial.   Which soon became two women after Virginia Waidlaw died in August, 1910.   Though she had been visibly wasting away in the weeks leading up to her death, nobody realized that she had been deliberately starving herself and feeding her meals to the rats which infested the prison.    Whether this was deliberate suicide or due to her despondency at being in custody, the end result was the same.

Which still left Caroline Martin and Mary Snead to stand trial.    Despite Martin's bizarre behaviour while in custody, including frequent outbursts in court as she defended herself, she was found fit to stand trial.    She eventually pled guilty to manslaughter but emphasized that the morphine overdose that killed Ocey was accidental.   Though she likely expected leniency, she was outraged when she was sentenced to seven years in prison on January 23, 1911.   Shrieking that she didn't deserve such a harsh sentence, bailiffs ended up carrying her out of the courtroom, chair and all.   As for Mary Snead, she was acquitted, largely based on a technicality since she could not be charged as an accomplice to manslaughter.  Caroline Martin continued with her bizarre outbursts while in prison and she was soon transferred to a psychiatric asylum.   Once there, she began starving herself much as her sister did and eventually died on June 20, 1913.

And there the story ends.   Ocey is buried at Mount Hope Cemetery along with her father, brother, and two children.  Mary Snead went to live with her youngest son and eventually moved to California where she died in 1937.   Some time before her death, she wrote a letter to a Tennessee newspaper in an attempt to clear her name.    Of her sister, Virginia Waidlaw, she wrote that she was "an angel on Earth.  It was her pity that led her to take Mrs. Martin and her daughter Ocey, a sweet, lovely child, into the school to live."   She was less complimentary about Caroline Martin, though.  "The bare truth is that Mrs. Martin was insane and had been so for years," she wrote.  "She should have been put into an asylum long before."

Was Ocey's death accidental or did her mother kill her as part of an insurance scheme?   You be the judge.