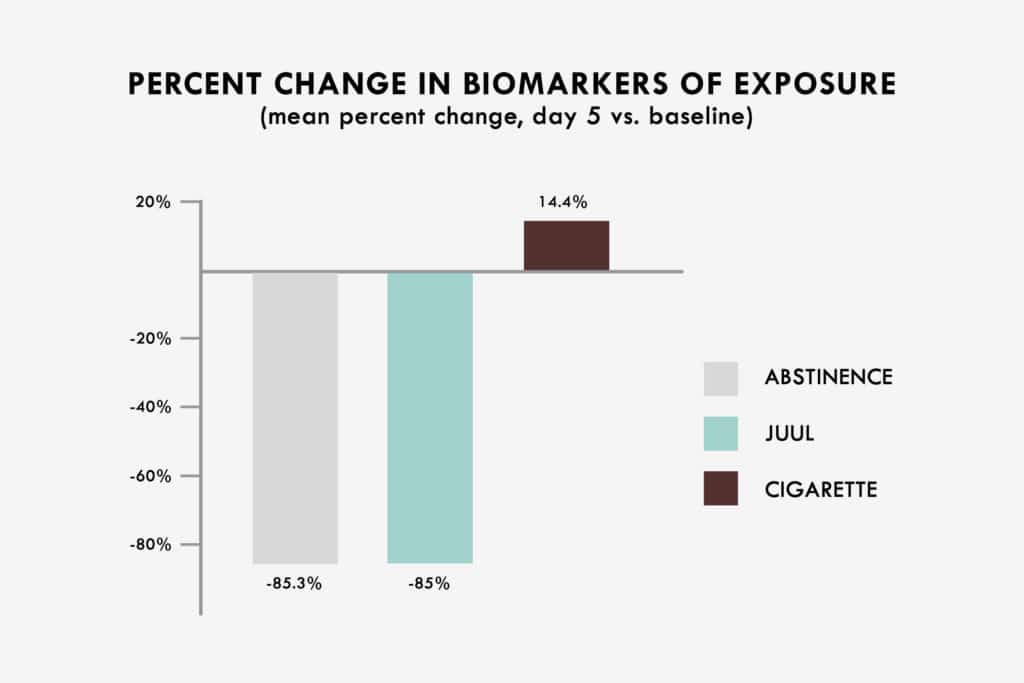 Over at Reason, Jacob Sullum highlights some key findings from a new clinical trial commissioned by JUUL Labs. The trial looked at reductions in key cigarette-related biomarkers that the FDA has identified as important in documenting the potential health effects of a tobacco or nicotine product. Below you can read the press release from JUUL.

JUUL Labs today announced results from a clinical study which found equivalent reductions in select short-term biomarkers of exposure (BOE) between adult smokers who exclusively switched to JUUL products and those who abstained from smoking over a five-day period. Results from the study, “Changes in Biomarkers of Exposure Associated with Switching for 5 Days from Combusted Cigarettes to Nicotine Salt Pod System,” were presented at the U.S. Society for Research on Nicotine & Tobacco (SRNT) 2019 Annual Meeting in San Francisco, CA.

The study, a randomized, open‑label, parallel‑group, inpatient study of adult smokers, was sponsored by JUUL Labs and conducted by Celerion, Inc., a third-party research laboratory. It examined changes, relative to baseline, in primary urine and blood BOEs in 90 adult smokers. The selected short-term biomarkers, NNN, NNAL, 3-HPMA, MHBMA, S-PMA, HMPMA, CEMA, 1-OHP, and COHb, are carcinogens observed in the use of combustible cigarettes, and are widely recognized as contributing to tobacco-related cancers.

Study subjects were randomized into six groups and, over five days, used a nicotine salt pod system (NSPS/JUULpod), abstained from smoking, or continued use of their usual brand of cigarettes. NSPS users were further randomized into four distinct groups (15 subjects per group), and used one of four flavored products at 5% nicotine strength (Virginia Tobacco, Mint, Mango, or Creme). Before the baseline reading, subjects abstained from smoking for 12 hours to assess the BOE impact from NSPS use, abstinence, or cigarette consumption.

“We are very pleased to share these findings with fellow researchers at SRNT 2019, which continue to demonstrate the potential positive impact of vapor products,” said Kevin Burns, Chief Executive Officer at JUUL Labs. “The equivalent reductions in these specific cigarette-related biomarkers across the groups who abstained from smoking and those who used JUUL products reaffirms the role vapor products can have for the adult smoker. Although addictive, nicotine is not directly responsible for the cancers that are commonly associated with cigarette use; rather it is the harmful constituents that are present in combustible smoke. The more that can be done to eliminate cigarettes, the greater the impact will be on the public health. We are committed to conducting rigorous, scientific research as we contribute to the ongoing dialogue regarding vapor products, and look forward to sharing additional research with the medical, scientific, and public health communities.”

Consistent with FDA regulations, JUUL Labs cannot and does not make any claims that its products are less harmful or safer than cigarettes.

For more information on the data presented at SRNT 2019, please visit jliscience.com.

The post Study Finds Switching to JUUL Reduces 8 Cigarette-Related Biomarkers As Much as Quitting appeared first on American Vaping Association.