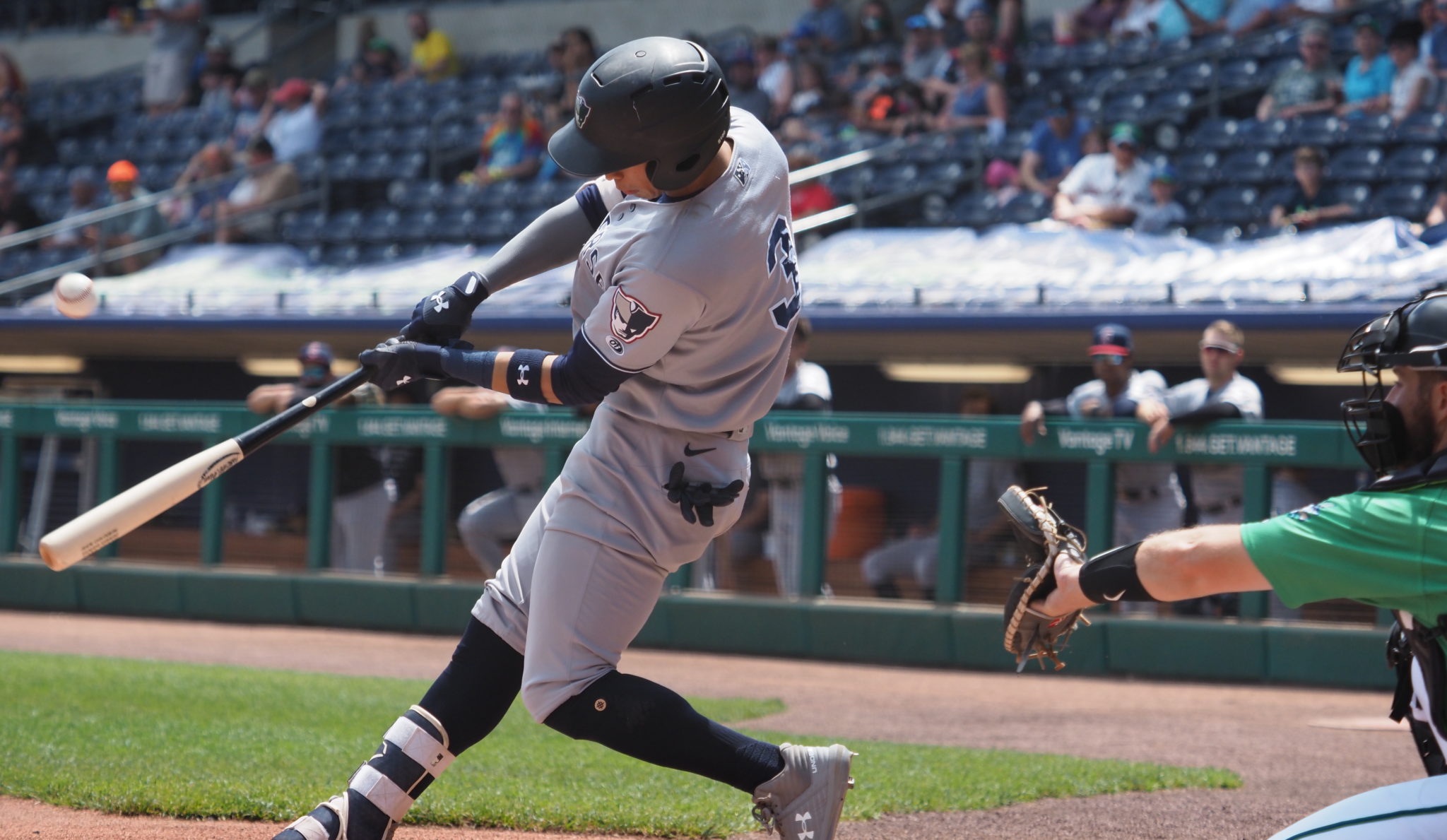 The Yankees find themselves stacked in the middle infield in the minor leagues. I believe the Yankees figure out this log jam at the upper levels or in the Bronx with a few of these players getting time at other positions besides shortstop and second base. Some could be dealt away for help the Yankees need in the current season or even in 2023. I would like to see Anthony Volpe play second and Oswald Peraza stay at shortstop in the Bronx for the next decade. Here I spotlight the many infielders that are in the Yankees farm system.

Anthony Volpe, SS – Just 21 years old, Volpe is the Yankees’ number one prospect the 30th overall pick in the 2019 MLB Draft, Volpe uses his compact line-drive swing to spray line drives all over the field while making plenty of contact and hitting with power. He has added strength and is now a consistent threat to drive the ball more and looks like a 20-plus homer threat. On the bases, he is a solid runner who will get some steals and take the extra base. Volpe checks all the boxes with a plus hit tool, advanced approach, plus power, and plus speed having above-average grades on all five tools a 20-20 plus player is in play here. Volpe began the season at Double-A Somerset where he has struggled out of the gate but I think he figures it out. At just 21, he is one of the youngest position players in his Double-A this season.

Oswald Peraza, SS – Added to the 40-man roster in November, Peraza has some of the best all-around tools among Yankees infield prospects. He has quality bat-to-ball skills and controls the strike zone well, allowing him to make consistent line-drive contact from the right side of the plate. Peraza needs to get stronger but already generates some of the highest exit velocities in the system and could develop 20 homer power in the majors. He used his plus speed and stole 38 bases in 48 attempts in 115 games last season. Peraza could have four plus tools once he’s fully developed. I suspect we will see him in the Bronx as soon as this season. Peraza broke camp with Triple-A Scranton/Wilkes-Barre and has also struggled. Peraza is one of the youngest players in triple-A this season.

The @Yankees‘ No. 2 prospect clears the fence in his first at-bat of the season for the @swbrailriders. pic.twitter.com/xfKaE4gv4c

Roderick Arias, SS – Arias, the top international prospect in the class signed for 4 million dollars at the beginning of the international signing period. There’s a lot to like about the teenager at the plate, he exhibits above-average bat-to-ball skills and strike zone awareness. He shows good plate discipline and doesn’t swing and miss often. Arias shows power from both sides of the plate, especially from the right side, and also owns good opposite-field power from the left side. His overall package could develop into a plus-plus hitter. On the bases, Arias shows very good anticipation and awareness. He consistently runs the timed 60-yard run in 6.5 seconds, which is above average and should translate to enough stolen bases to make him a good threat on the bases.

Trey Sweeney, SS – The Yankees first round pick in 2021, Sweeney hit .261 with seven homers in 32 games during his professional debut with the FCL Yankees and Tampa Tarpons. The 2021 Ohio Valley Conference Player of the Year is a bat-first player with excellent raw power and contact ability. With his good feel for the barrel, Sweeney controls the strike zone well and can hit to all fields with strong plate discipline and the ability to hit the ball out of the park. His hitting ability, strength, and bat speed should produce at least average power, perhaps more if he adds more loft to his swing. Sweeney has below-average speed. Being large for the shortstop position and with other shortstop prospects in the system, a move to third base or corner outfield isn’t out the question here. Sweeney began the season with High-A Hudson Valley.

Attempting to confirm this Trey Sweeney homer has landed. Please stand by. pic.twitter.com/fQC83DhNF6

Alexander Vargas, SS – Vargas is a quick and athletic switch-hitting shortstop who puts the ball in play and swipes a lot of bags. He hit .273 in the FCL in 2021 with 17 stolen bases. Vargas has solid hitting actions and a good feel for the strike zone leading him to make consistent contact. However, because he’s so thin and has little strength, Vargas does little damage when he does connect, so getting stronger will be vital for his development. Vargas sticks out for his defensive skills at shortstop he is an impressive athletic defender with a quick first step and good range. His hands and feet work well and his field awareness is advanced for his age. His ceiling is a .290 hitter with mid-teens homers and 30 plus steals and his floor is a solid utility player. A move off shortstop isn’t out of the question here. He could end up being an outfielder down the line, but I believe he can be a real trade candidate. Vargas began the season with the Tampa Tarpons in Single-A.

Oswaldo Cabrera, SS/2B/3B – Cabrera made some swing changes during the 2020 Covid year and had a breakout 2021 season with Somerset and Scranton/Wilkes-Barre. Cabrera showed good power and speed between the two stops hitting .271 with 29 home runs and stealing 21 bases. The switch hitter is a line-drive hitter with solid power who doesn’t strike out a lot with his good pitch recognition. He also owns above-average speed on the bases. Cabrera is an excellent defender and has the look of a useful utility infielder. He was added to the 40-man roster in December and can play an above-average SS/2B/3B. Seeing him in the Bronx in 2022 isn’t out of the question after being added to the 40-man roster in the offseason.  He also left the Patriots for a few weeks to participate in the Olympic qualifying tournament where he represented his native Venezuela last season. Cabrera began the season at Triple-A Scranton/Wilkes-Barre.

Roberto Chirinos, SS/2B/3B – One of the most underrated players in the Yankees farm system Chirinos, started the 2021 season with the FCL Yankees and was promoted to Low-A Tampa in mid-July. He has good bat speed and makes hard contact to all fields. Chirinos has good power right now with more to come as he grows but he had an elevated strikeout rate in 2021 (29% of his at-bats). Chirinos also owns above-average speed he uses well on the bases to get the extra base or steal a bag.  He has a utility player role since he can play all over the place and might develop a 50 hit tool. Chirinos began the season with the Tampa Tarpons in Single-A.

We have a lead! Clutch RBI single by Roberto Chirinos pic.twitter.com/KsBxh3ugdL

Hans Montero, SS – At just 17 years old Montero signed for 1.7 million out of the Dominican Republic in 2021. The right-hand hitting shortstop projects to have above-average tools across the board. With his quality approach, he barrels the ball very well and has the ability to make contact to all fields using his gap power and plus speed. As he puts on muscle and his body fills his I expect him to have above-average power. He also possesses plus speed on the base paths. In the field, he has smooth actions and soft hands. His best tool is his arm which should help keep him as a shortstop in the long term.

Cooper Bowman, 2B – In the fourth round of the 2021 draft, the Yankees selected Bowman from Louisville University. Bowman displayed strong bat-to-ball skills in college as well as quickness on the bases, where his 20 stolen bases led the Atlantic Coast Conference. He continued to run during his professional debut for Low-A Tampa, as he stole 13 bases in 14 attempts. Bowman has a good feel for hitting with a smooth right-handed swing that is super short to the baseball. His patient approach helps him regularly put the ball in play with consistent contact he regularly gets on base. Bowman’s bat speed and strength give him solid raw power and he shows the ability to drive the ball out of the park from gap to gap. There is 15-20 homer potential for him. Bowman began the season with High-A Hudson Valley.

Ben Cowles, SS – Cowles was drafted in the 10th round of the 2021 Draft and led the Big Ten in home runs with 18 in only 48 games. But he did show some swing and miss in his game striking out 57 times in 2021 good for a 26 percent strikeout rate. He needed just one pitch in his first-ever Spring Training at-bat wearing a Yankees uniform to make it a memorable one in 2022. On a 0-0 count with a man on third, Cowles saw a first-pitch fastball and launched a missile off his bat to left-center field. The ball flew over the scoreboard at George M. Steinbrenner Field in Tampa. Cowles began this season with Single-A Tampa Tarpons where the swing and miss is still very evident.

Absolutely launched a two-run homer out of Steinbrenner Fieldpic.twitter.com/QyLYxbFV9x

Max Burt 2B/SS/3B – Drafted in the 28th round of the 2018 MLB Draft out of Northeastern, he has worked his way up through the Yankees organization and is now on the doorstep of the big leagues. Losing the 2020 season was a huge loss in his development. Burt opened last season with High A Tampa, was promoted to Double-A in May, and moved up to Triple-A in August starting 17 games at first base, 13 at second base, 13 at shortstop, and 39 at third base over the course of the 2021 season. Burt has the makings of a solid utility player in the Brock Holt mold. He had a good Spring Training and opened up some eyes. Burt began this season at Double-A Somerset.

Eduardo Torrealba, 2B/SS/3B – Torrealba put together his best season as a professional in 2021, slashing .299/.367/.384 while playing at three levels and finishing with Double-A Somerset. He has a good ability to get his bat on the ball, striking out just 11 percent of the time in his 238 plate appearances last season. His offensive profile is very similar to that of former Yankees prospect Diego Castillo. Torrealba began the season with High-A Hudson Valley.

Jesus Bastidas, 2B/SS/3B – After hitting just one home run in his first 606 career at-bats, Bastidas hit nine home runs in 177 at-bats for Low-A Tampa and Double-A Somerset in 2021. Promoted to Somerset in mid-July, he had his best offensive display to date, hitting .278/.391/.511 over 110 plate appearances with the Patriots. Jesus started the season with the Double-A Somerset Patriots.

Here is a list of some really deep dive players that are a few years away from the higher minors or the major leagues.