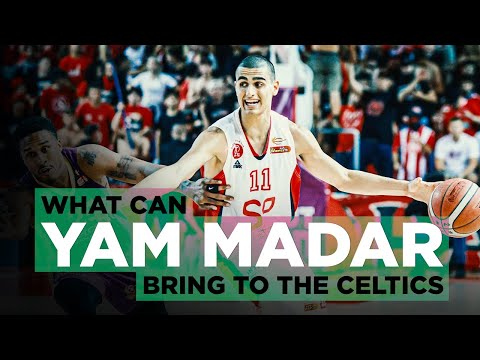 On occasional mornings, we compile the links of the day and dump them here… highlighting the big story line. Because there’s nothing quite as satisfying as a good morning dump.

Do you want to see some video of Jayson Tatum preparing to play for Team USA? Of course you do!

Jayson Tatum getting some summer work in Miami.

slo-mo @jaytatum0’s ready to put on a show

Tonight at 8 p.m. Eastern time, Team USA will play Nigeria in the first of five exhibition games against other Olympics squads. The Americans will next play on Monday at 8 p.m. vs. Australia. Both games will be televised in the States on the NBC Sports Network.

The entire men’s national team schedule, including all exhibitions and Olympic play, can be found here.

On Page 2: Yam in the summer

The 6’3” Madar shot 40.9% on 3-pointers for Hapoel Tel Aviv, hitting 54 of his 132 attempts. He shot 46.9% in the Israeli Super League and 82.8% from the line. Considering free throw shooting is a stronger bellwether for the quality of shooter, the overall shooting numbers have become incredibly encouraging.

However, it’s very important to note the drop in talent between the NBA and Israel’s pro league. It’s still good basketball, but it doesn’t compare to what Madar would face on a nightly basis. Also, overseas basketball isn’t nearly the grind that NBA basketball is, so it’s fair to wonder how his shooting will fare as the NBA season marches on for a high-energy guy.

Boston Sports Journal: Karalis: Yam Madar is intriguing, but is he ready for the NBA?

With Kemba Walker gone, the Celtics need depth at the point guard position. That’s why Yam Madar is on our radar. Yam was drafted last year with the 47th overall pick, but stayed in his native Israel to continue his development. He’s going to play for the Celtics in the Summer League next month. If Yam does well in those games, perhaps he’ll come to Boston for next season.

Madar has actually been trying to leave his current team, but there’s a dispute: the team claims they would be due $700,000 compensation if the guard walks away. If that gets worked out, then the question is: can he play on the NBA level?

The NBA is full of former MVPs of some league overseas who came over to assume small roles. Bran Wanamaker’s non-NBA pro resume is incredibly impressive. He made the All-Star game twice in two leagues, was an MVP, a Finals MVP twice, and a four-time champion, and he’s fighting to hang on in the NBA.

That’s what makes this summer league very interesting for Boston and Madar. Summer league doesn’t always tell us much, but it could give us a little glimpse into who he is as an NBA player. We’ll get to see where his fundamentals are, and how much of those highlight reels really edited out.

The BSJ article contains a Yam highlight video, but if you can’t see behind the paywall, we’ve got it here.

And, finally… The wrist looks good

Wondering how Jaylen Brown is doing after his left wrist surgery? Just fine, it seems. He was on the Jimmy Kimmel show this week, took part in a goofy basketball challenge, and won a large donation to his charitable foundation. Most notably, he was not wearing a cast or any type of wrap on the wrist.

.@NBA all-star Jaylen Brown puts his reputation on the three-point line in the most distracting basketball game ever!