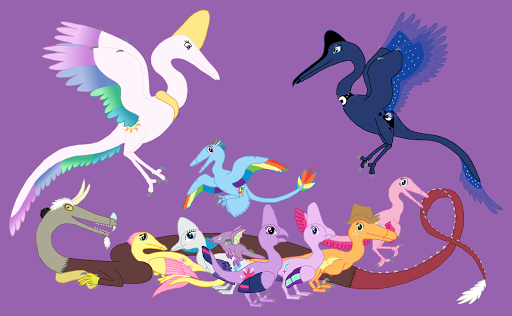 Why I Like My Little Pony: Friendship is Magic

My new April 1st tradition is to write about topics that would normally be off-topic for this blog. This year, let's talk about... this.

Fan art does not comprise the bulk of my artistic output, but I've drawn a fair amount for My Little Pony: Friendship is Magic (henceforth "MLP" for brevity, though I realize that that also refers to the entire franchise instead of just this particular iteration of it). It's even been the primary basis for one of the major storylines in the Raptormaniacs comic. Why do I keep drawing fan art of MLP?

This isn't a post that anyone asked me to write. Some might even think it's inane that I'm spending time writing it. I suspect that most of my friends and followers would be satisfied if I answered that question with "because I like the show".

At the same time, I also suspect that few if any people who follow me did so for the fan art. It wouldn't surprise me if I have followers who are curious, perplexed, or even frustrated every time I drop a new piece of MLP fan art in their social media feeds. So I'm going to talk a little bit about what this show means to me. 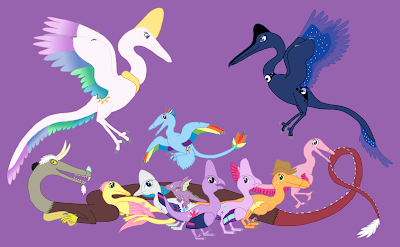 Is the show really that great? I certainly think that it's good overall, and much better than a glorified toy commercial needs to be. However, it is not my favorite show, and though I would consider it a standout animated series for when it premiered in 2010, I feel that both the absence of a coherent vision in series direction (due to it changing hands between several different showrunners) and the surge of other high-quality cartoons in recent years has rendered it in some ways unexceptional.

Even so, there's a lot I like about MLP. The fact that the protagonists are six female characters with contrasting personalities and career choices who are all multifaceted beyond what first impressions might suggest is a big plus. The concept that there are many ways of being a girl is a great message for the target audience, and it also means that almost anyone watching the show can likely identify with one (or more) of the main characters. (I relate most to Twilight and Fluttershy, for the record.)


I would be lying if I claimed that MLP hasn't made me more aware of common pitfalls in the portrayal and representation of female characters in popular media, including my own rare forays into fiction writing. It's had a real influence on my work for TetZoo Time (which, uh, probably won't ever be released) and Chile & Yi. And, boy, do I regret having only one female character on the main cast of Raptormaniacs.

Beyond the characters themselves, I find it refreshing to watch a show that revolves around adults making and maintaining friendships, instead of constantly putting each other down. Sure, a world in which "friendship conquers all" may come across as sickeningly sweet to jaded adult audiences, but the show doesn't shy away from the notion that one may need to fight (figuratively or literally) to maintain such a world. Friendship is powerful, but it's not always easy, and that is a lesson that can be just as applicable to adult lives as to those of children.

And frankly? Friendship may not manifest as villain-vanquishing lasers in real life, but a society built upon collaboration, acceptance, and compassion is one that I would like to live in, and it's one that we have the power to create. Especially in times like the ones we're living in right now, that seems like a worthy goal to strive for.


Uh, right, I got sidetracked there for a bit. What else do I like about MLP? Well, the music is pretty great. I think just about anyone who has worked on a creative project can relate at least a little to "Art of the Dress", "Winter Wrap Up" is a nice piece of worldbuilding packaged into a catchy tune, and I find "A Kirin Tale" to be quite uplifting, just to name a few of my favorites.

That much explains the main reasons why I like the show. But why do I draw so much fan art of it? Partly it's because fan art adds a layer of novelty to otherwise unremarkable concepts. I could draw a Microraptor flying or an oviraptorosaur kicking a predator, but there's not much I could bring to those subjects that a better artist couldn't conceive of and execute. However, if I drew Rainbow Dash as a microraptorian in flight and Rarity as an oviraptorosaur kicking a changeling? That's much less likely to have already been done by someone else.

Yet there remains the question of why it's MLP that features so frequently in my fan art, as opposed to the handful of other fictional works I follow. I have tried my hand at "dinosaurifying" some other cartoons I enjoy, but so far they haven't inspired as many creative works from me as MLP has.

One reason is practical: MLP's art style is fairly easy to emulate. It's probably testament to the design and characterization in the series that it's relatively straightforward to adapt the characters into alternate forms. It's even been done in canon more than once (albeit to... varying results).

Another important factor is that the series setting presents a mixture of familiar and fantastical elements that readily provides a springboard for creativity. It may be simple enough to come up with alternate forms for the characters, but what might this change about how they interact with their world? How would a sapient paravian use a teacup? Would an event analogous to the Chicxulub impact be a major concern when your ruler can move the sun? In some ways, it's not dissimilar to a speculative biology project about dinosaurs that have evolved human-like intelligence (and magic, apparently).


That about covers everything I wanted to say. I'll leave you with a record of my artistic evolution as documented by My Little Maniraptor. This was the first MLP fan art I ever drew, and I've redrawn it twice since then. Time will tell if I revisit it again. 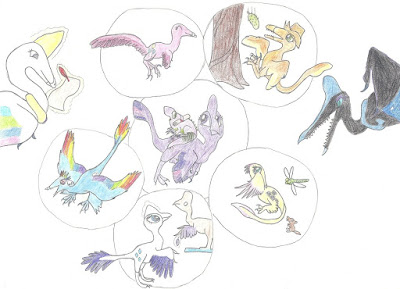 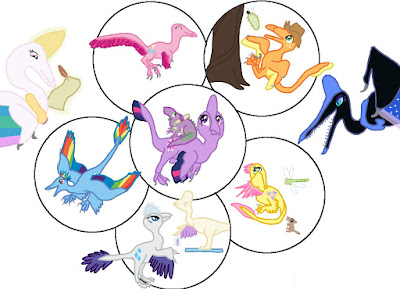 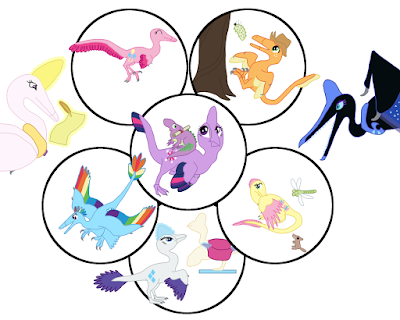 Why I Like My Little Pony: Friendship is Magic