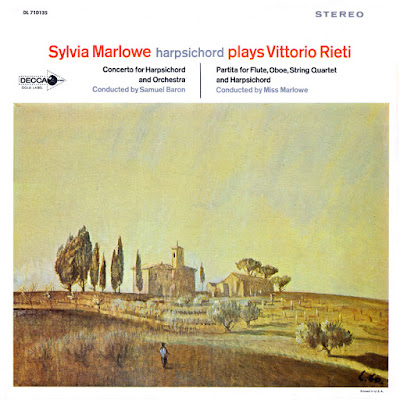 The eminent American harpsichordist Sylvia Marlow (1908-1981) is heard today in two works dedicated to her by the composer Vittorio Rieti (1898-1994).

In the Concerto for Harpsichord, the orchestra is conducted by Samuel Baron, better known as a flutist, although he conducted throughout his career. Baron also takes part in the Partita for Flute, Oboe, String Quartet and Harpsichord, conducted by Marlowe from the keyboard.

These are delightful works in a neoclassical vein from the pen of Rieti, an Italian who was resident in the US after 1940. Despite the scowling portrait of the composer at left, Rieti's music is known for its charm. He composed two ballet scores for Serge Diaghilev during the 1920s, both choreographed by George Balanchine. The composer and choreographer continued to work together after both moved to America.

Marlowe was particularly fond of the Partita, which she commissioned and recorded three times. The Harpsichord Music Society, which she founded, commissioned the concerto.

Known both for her mastery of the baroque repertoire and her dedication to contemporary composers, Marlowe was one of the key figures in bringing renewed attention to the harpsichord during the mid-20th century.

The performances here are everything you might wish, and the upfront sound is what American Decca was providing on disc during the 1960s. (These date from June 1966.) If anything, though, Marlowe's instrument is buried in the mix - in contrast to many other harpsichord records of the day, where the instrument is unrealistically loud. One minor drawback to the sound is the presence of some rustle in the right channel.

This transfer was in response to a request on another forum.