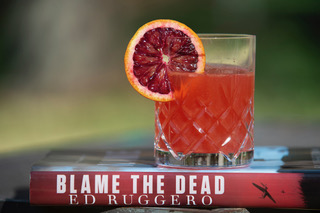 Ed Ruggero and Blame the Dead 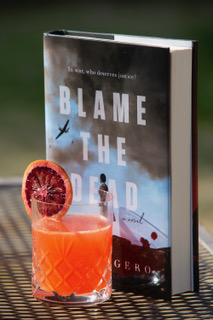 Ed Ruggero joins us today on Drinks with Reads to celebrate his new thriller, Blame the Dead with a drink called the Sicilian '43.
o
Blame the Dead is a thriller set against the chaotic background of the World War Two Allied invasion of Sicily.
Former Philadelphia beat cop Eddie Harkins is not surprised when the Army makes him a Military Policeman; he is surprised when, in the bloody summer of 1943, he is tapped to figure out who gunned down a surgeon in a US Army field hospital. Harkins, who has spent his Army time hauling in drunken GIs and breaking up traffic jams, has never worked a homicide. The lurching start to his investigation proves he is in over his head, but Harkins is not one to back down from a fight.
Cooperation is hard to come by in part because the victim—who was universally despised—bullied and tormented nurses. Harkins hears, “He got what was coming to him,” so often he stops scribbling the response in his notebook. Harkins’ low rank bestows little authority in his battles with the hospital commander, who is hiding bigger sins in his camp. Then, just when Harkins is starting to drag some facts from the chaos, a key witness is shot to death. Meanwhile the flood of broken bodies never slows as the hospital leapfrogs forward just behind the battlefront. Harkins is exhausted and demoralized, clueless, filthy, and far from home, and everyone is struck dumb by the heat.
The Sicilian ‘43
Eddie Harkins and his fellow soldiers would have been thrilled to get their hands on a cool drink, especially one with impossible-to-find ice. Creating this beauty of a cocktail in wartime would have been challenging; but with a thriving black-market, the more inventive and determined GIs might have made a go of it.  The inspiration for this cocktail comes from Sicily’s orange and lemon orchards, and the name is a variation on the “French 75,” a cocktail that gets its name from the French 75mm field gun of World War One. The Sicilian 43 is a nod to the land where the Allies first cracked the walls of Hitler’s “Fortress Europe.”
1 oz fresh blood orange juice
1 and ½ oz gin
½ oz Maraschino Liqueur
¼ oz Amaro Averna (an Amaro from Sicily is best; it’s a bitter liquor like Campari, easy to find, but Campari would also work as a substitute)
2-3 oz Prosecco
Orange twist
Combine orange juice, gin, maraschino, and Averna in a cocktail shaker, fill with ice, and shake. Strain into a cocktail glass and top with Prosecco. Garnish orange twist.  Drink a toast to Victory in Europe!

Ed Ruggero and Blame the Dead