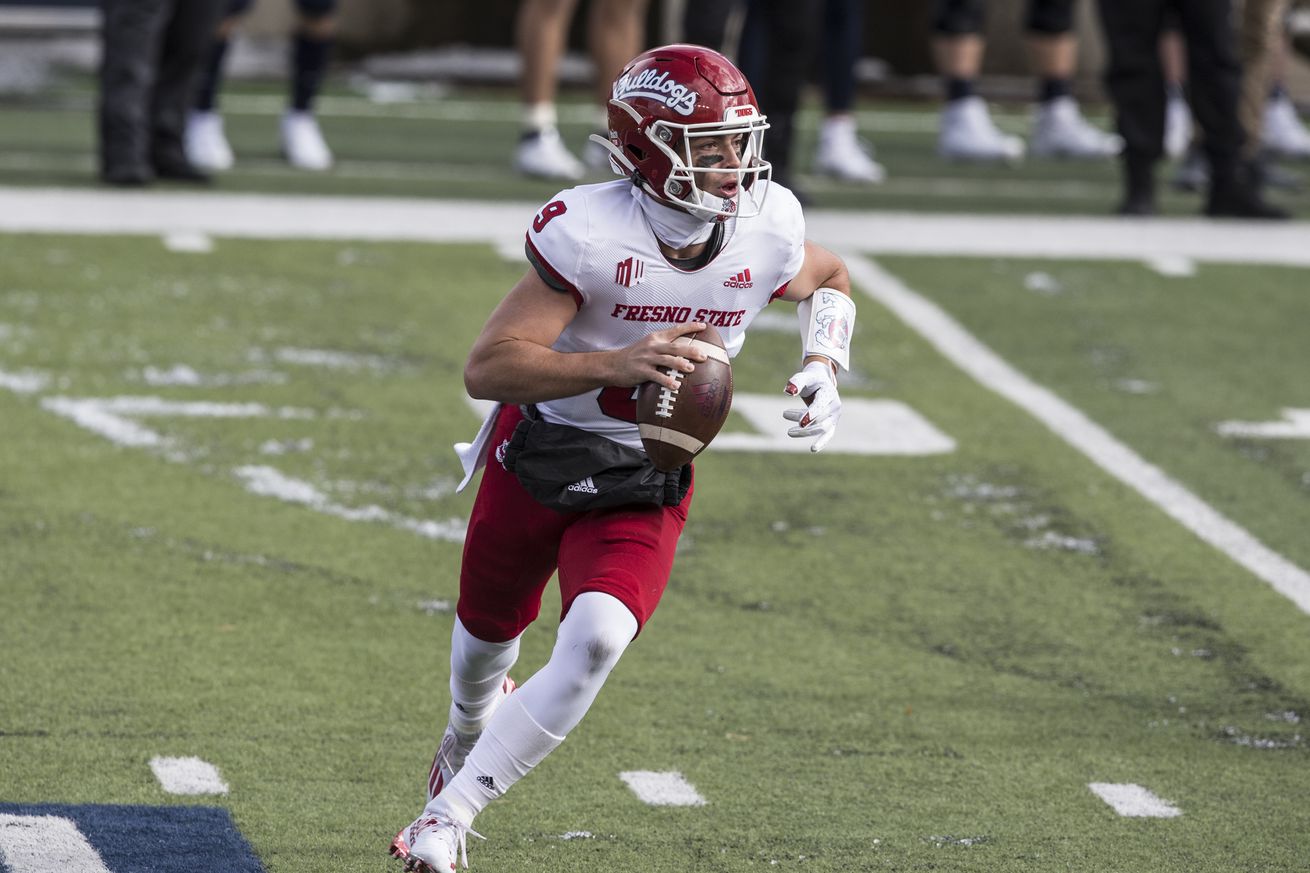 In what may go down as the strangest season in Bulldog football history, we can finally look back at 2020, and look forward to 2021. First we had a season, then we didn’t, then we had an 8 game season, and we ended up with a 6 game season. All with a new coaching staff with no off-season programs, the latest return to football activities in the Fall, and tons of turnover on both sides of the ball. After all of that, Fresno State ended up 3-3 on the year with a stumble at the beginning and end of the season. Now the Dogs hit the reset button again for 2021.

After the shock retirement of Jeff Tedford at the end of the 2019 season, Kalen DeBoer returned to the Dogs after a year as the OC at Indiana, his first head coaching job after a stellar 67-3 record at NAIA Sioux Falls. Expectations were muted after the rough 2019 season, but DeBoer was in charge of the offenses in the excellent 2017 and 2018 seasons. Then, COVID-19 hit. Spring practice was canceled, off-season conditioning programs were suspended, then word came down that the season had been canceled. We eventually got in half of a season in what became more of an extended pre-season camp for the team, and a .500 record that doubled DeBoer’s career losses to 6.

The weight of the 2020 offense rested on the shoulders of star senior running back Ronnie Rivers and newly installed transfer QB Jake Haener. We saw flashes of absolute brilliance from both, with Haener playing like an absolute magician against Utah State and Nevada, and Rivers showing his first-team power against UNLV. There was also a lot of growing pains with the new players and new staff, namely in that passing game. In the first game of the season, 5 turnovers doomed the Bulldogs against Hawaii, and the offensive line could not keep Haener upright in the season finale loss to New Mexico. Luckily, after missing the final game due to injury, we will see Ronnie Rivers returning for one more season in 2021, and there should be at least two more seasons with Jake Haener growing under center. The O-Line definitely needs improvement, but there’s definite hope for the future with Keric Wheatfall, Jalen Cropper, Zane Pope, Ronnie Rivers, Javon Bigelow, Jordan Mims, and Juan Rodriguez all coming back to what showed to be a dynamic offense at times.

On the offensive front, things look less rosy. Senior Syrus Tuitele, the only constant over the last 3 years, has declared for the NFL draft, and the rest of the offensive line did not inspire confidence. Yes, they were again beset by injuries that led to a lot of rotation, especially down the stretch, but this is two years in a row now with massive problems on the O-Line. It’s a shocking regression from how good they were under the first two years of Ryan Grubb. Now, youngsters like Mose Vavao and Dante Adkins definitely show potential on the line, but hopefully the coaches can really cement the 5 positions to give Haener time to throw and make plays. He was a magician most of the year, but he was running for his life far too often, and it led to way too many sacks in critical situations. Coaches Grubb and Saupolo have their work cut out for them over the 2021 off-season to get better lest their seats get very hot.

While the defense definitely looked like it can be an extremely exciting unit, and did put up more than enough points to win in most games, the defense was far less encouraging. Yes, the defensive staff was almost entirely new from 2019. Yes, they were changing scheme entirely. Yes, they were replacing a lot with Mykal Walker and Justin Rice departing. Yes, they went without spring and fall football. But they severely went backwards over a unit in 2019 that wasn’t great to begin with. Mobile QBs were a massive issue, even QBs that weren’t mobile gained huge amounts on the ground like Max Gilliam. Many times, players looked lost or completely out of position during plays. By the end of the season, due to COVID and injuries, the defensive line was down to only 4 players dressed, and leading safety Evan Williams was out for the season. The new 4-2-5 scheme was gashed badly by run games, and was susceptible to big pass plays behind them.

Things were not all doom and gloom on the defense though. Freshman walk-on Bralyn Lux looked like an absolute star in the making ever since he forced a fumble on the opening kick-off of the season, and continued to play at a very high level all year. He needs to end up on scholarship so he can continue to grow. David Perales and Kwami Jones were a lethal combo coming off the edges, and both are coming back next year. Walk-on 4* recruit Justin Houston showed flashes at the new Husky position along with Malachi Langley, and it has been announced now that senior DT Kevin Atkins and Jones are both coming back, giving a strong core on the defensive end of almost all starters returning for next year. This could just be that there was too many moving parts to be successful without an off-season to learn and install, we’ll have to see a lot of improvement for next season, especially with Nevada, SJSU, SDSU, Hawaii, and Boise all looking strong for next year as well. Fresno State can not stand to fall behind in the West Division for another season.

Looking ahead, this year will probably be seen more as an aberration and a blip instead of a downward trend, especially with no risk to eligibility for players this year. That allowed coaches to really get more experimental with young players, as well as experienced players getting that extra year of playing time creating even more experienced teams for 2021. We’ll also hopefully see the results of DeBoer and Co’s recruiting classes, as they put in an absolute belter of a class in December.

On the recruiting front, Fresno State is finally back to “normal” in terms of scholarship distribution and classes. When he came in, Jeff Tedford had to lean heavily on the blueshirt system to get Fresno State back near the 85 scholarship limit after attrition under Tim DeRuyter led to the Bulldogs being way down on players going into 2017. That led to some smaller than normal classes available, but now things are finally back to normal. The headline of the class has to be local RB Jordan Hornbeak and QB Jaylen Henderson. Fresno State was able to land Henderson’s commitment over schools like Boise State, Louisville, Harvard, Vanderbilt, and Northwestern. That’s a really big deal for any Group of 5 school, let alone Fresno State. Hornbeak also continues the new push of the staff going back to Tedford to focus on Central Valley players, an area completely neglected by the DeRuyter staff, who whiffed on some kid named Josh Allen who was right next door in Reedley. The rest of the class consisted of all 3* players and shored up many areas of need, leading to 4th in the conference, and 2nd best on a recruit average score ranking. The staff is apparently looking for another couple of players for the February date, so they could move up even farther in the conference rankings.

The class currently has 14 of 17 players from the Western time zone, with 9 from California, which is exactly what you want a school like Fresno State to do. Find the kids that the PAC-12 schools overlook, and keep them in-state and near their families and friends. California, and its Central Valley, are a hotbed of football players and talent, and any Fresno State coach would be remiss to not mine that area for all it’s worth. Even if they do miss on top-flight players like Kendall Milton and Jalen McMillan, but landing a Jalen Cropper and Jordan Hornbeak shows those local stud players that you can stay home and play for your local team and be successful.

Looking ahead to the 2021 season, assuming that it will be a more normal season like we’re used to, things do look like they could go really either way for the Bulldogs. The season is supposed to begin with a home game against the Huskies of UCONN, followed by a road trip to a very good Oregon squad, a home date against Cal Poly, and another road trip to the Rose Bowl to take on a sputtering UCLA squad. It’s not completely out of the question to see Fresno State bounce back with a real off-season to go 3-1 in the OOC schedule if the O-Line and defense can take the needed steps forward in the offseason. Boise State will return to the schedule in the Battle of the Milk Can, and the Dogs will be hungry to bring the Golden Screwdriver, Valley Trophy, and Old Oil Can back home after losing them all after the last two seasons.

2021 will be the actual first real look at Kalen DeBoer and his staff and team, since 2020 appears to be really a write-off in Fresno. Getting back to a bowl game has to be the barest expectation for the program, and back to competing for the Mountain West title instead of ceding it to Nevada and San Jose State like this year. I’m cautiously optimistic at this point, especially with the number of players returning for next year. It’s up to the players and coaches to prove me right, and get the Bulldog faithful back on side for the Valley’s team. For all the best Mountain West news, keep it glued here.