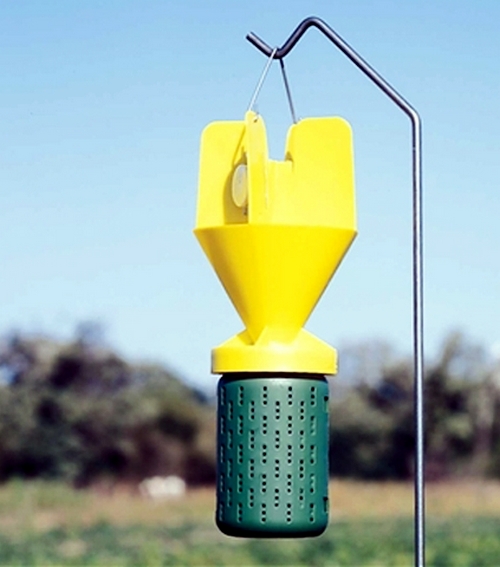 Japanese Beetle Traps – Do They Work in the Garden?

Japanese beetles (Popillia japonica) have become a major pest in Eastern North America and other places. The Japanese beetle trap is routinely recommended for garden use and is easily available commercially, but does it work?

One of the problems with this trap is that it does “seem” to work – it catches lots of beetles. But does it bring all the neighborhood beetles to your yard? Will a Japanese beetle trap reduce the damage this pest does to your roses and other tasty plants?

The answer to these questions is a bit more complex than you might think.

What is a Japanese Beetle Trap?

Commercial traps usually have a yellow top piece attached to some type of bag. A special chemical lure is placed near the top of the trap. Japanese beetles are attracted to the the yellow color but the chemical lure is the main reason they are come to the trap. Once they get to the trap, they fall in, and tend to stay there.

The lure can contains several chemicals. One is a female sex pheromone that attracts males. Another is a chemical that smells like one of their favorite foods, dead flowers, and this attract both males and females.

Does the Japanese Beetle Trap Work? 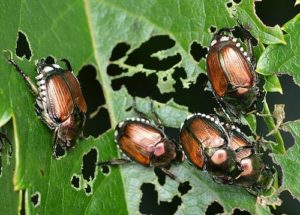 I always get a chuckle when someone on social media claims “it works”, without ever defining the term. Without a definition, the claim is meaningless.

The trap certainly attracts and captures Japanese beetles but let’s face it, gardeners are not really interested in catching beetles.

They want the trap to protect their plants, so a more important question is, does it prevent damage to plants? If not – it is not working.

Does it reduce the population long term? Will the gardener have less pests next year?

How Powerful is the Trap?

Studies have shown that this trap can attract Japanese beetles from as far away as 5 miles (most claim half a mile). This is the reason some suggest that all the trap does is bring in beetles from the whole neighborhood, making the problem worse in your yard.

The reality is that climatic and wind conditions make it unlikely that a trap has such far reaching effects. Normally they attract beetles from a 250 ft radius. That means that in a normal urban setting, a single trap pulls in all the beetles from the homes you can see from your front and back door.

How Effective Are the Traps?

Research has shown that Japanese beetle traps only trap about 75% of the beetles they attract. The remaining 25% end up near the trap feeding on plants.

The traps ability to protect plants in a garden depends very much on where it is located. When they are within 30 ft of the target plants, the traps do not reduce the damage to plants. In fact, studies show that damage may actually increase when traps are used.

The larvae density in turf is also not affected around traps which means the traps do not reduce the number of future beetles, at least no in your yard.

When traps are placed more than 100 ft away from target plants they can significantly reduce damage to those plants.

Most commercial products recommend placing them 10 ft away from target plants and that is far too close. I suspect they use this recommendation so that they seem suitable for even small back yards. 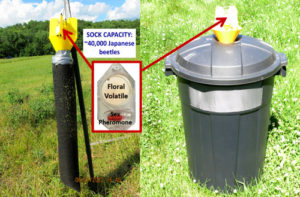 When Japanese beetle traps are used in areas with a lot of beetles, spillover of the traps can become a major issue. This happens when the collection bags get too full and excess beetles are no longer trapped in the bag. In this case, the traps attract beetles to the area which then start feeding on plants.

This can be prevented by frequently emptying of the bags, or by using larger bags. Most commercial products are too small for a high load of beetles.

Some studies that have shown success with modified traps that have a very high capacity. In one case the bag was replaced by a 32 gal garbage can, or a four foot long mesh sack.

In areas where Japanese beetles are well established and numbers are fairly high, the traps are less effective because the reduction in numbers is insignificant compared to the number in the area.

More success has been seen in areas with few beetles, in isolated populations or in areas where the beetle is just starting to establish itself. In such areas, traps can keep populations low enough so that they never get a foot hold, and never become a major pest. The traps do need to be deployed over the full area being controlled – not just one back yard. 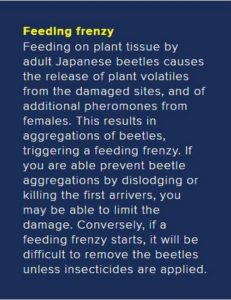 If there is a commercial product for a pest, there will also be DIY solutions.

A common suggestion to attract the pest is to use water, sugar, a mashed up banana and some yeast. This may attract Japanese beetles, but it will also attract all kinds of other insects, including beneficials, but it’s not particularly effect for Japanese beetles. If you are going to make your own traps, at least buy commercial chemical lures which are available as replacement items for traps.

DIY traps may be a good idea. Some traps are quite expensive, and as noted above, most have a bag that is too small. A DIY trap can work when combined with a commercial lure.

Should the Gardener Use Japanese Beetle Traps?

Traps are not very effective in a normal size yard.

They can be useful in two special situations. Traps can protect plants in larger gardens, if  the traps can be placed far enough away from the plants being protected.

Traps can also be useful where a whole neighborhood uses them. Beetles will not fly into your yard because the traps in other yards are keeping them there. A community using numerous traps can also catch enough beetles to impact the future local population. But this only works if everyone cooperates, and cleans the traps on a regular basis – something many people will not do.

Note: this post contains affiliate links to some products. I don’t endorse these products, but merely use the links as examples.

The post Japanese Beetle Traps – Do They Work in the Garden? appeared first on Garden Myths.

Japanese Beetle Traps – Do They Work in the Garden?