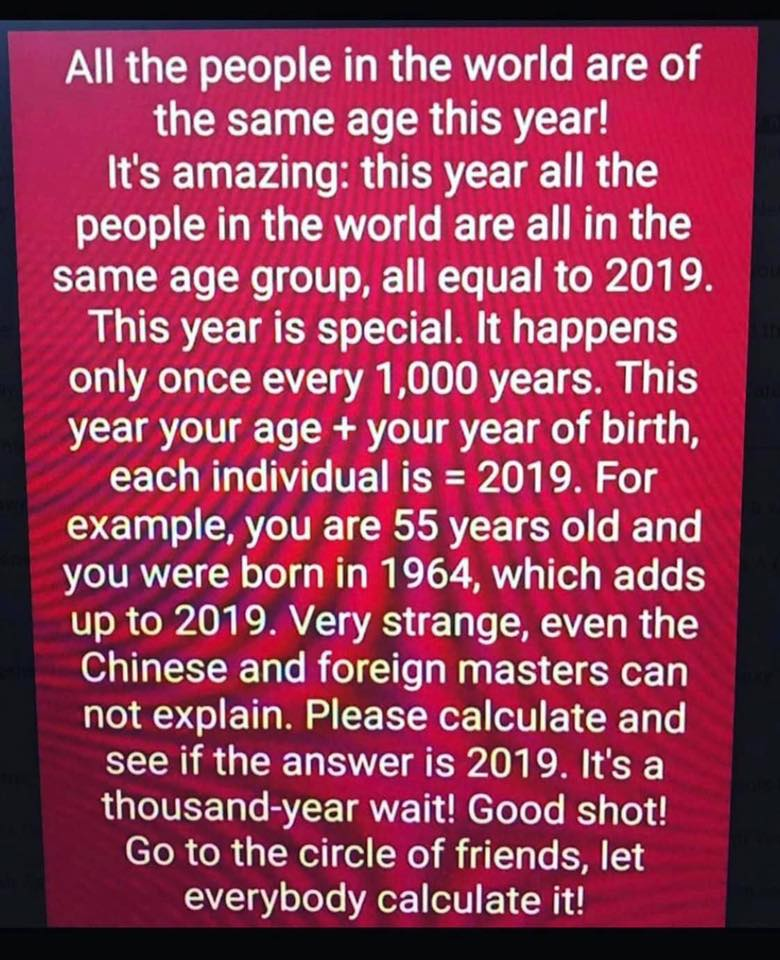 Does Adding Your Birth Year to Your Age Total The Year Number Once a Millennium?

In September 2019, a social media post shared the following math meme, claiming that a numerical rarity in 2019 made it so that “all the people are the same age,” and that no one could explain the anomaly:

What appeared to be a literal screenshot (as in, it was a photograph of a screen) displayed the following text:

All the people in the world are of the same age this year! It’s amazing: this year all the people in the world are in the same age group, all equal to 2019. This year is special. It happens only once every 1,000 years. This year your age + your year of birth, each individual is = 2019. For example, you are 55 years old and you were born in 1964, which adds up to 2019. Very strange, even the Chinese and foreign masters can not explain. Please calculate and see if the answer is 2019. It’s a thousand-year wait! Good shot! Go to the circle of friends, let everybody calculate it!

Thousands of people shared the post, suggesting that they performed the mathematical function in question (birth year + age = 2019) and validated the claim themselves.

It seems impressive, as by the ninth month of the year, the majority of people have already had a birthday. But iterations of the “birth year + age equals the current year” only happening every thousand years circulated earlier in 2019 and in 2018 (on December 18) as well:

Today is a very special day.
It happens only once every 1,000 years
Your age in years + your year of birth = 2018.
This is true for everyone.
It will not happen again for another 1,000 years.

Strange but true! But how? pic.twitter.com/rZTY1L1EF9

It shows up as far back as 2011, albeit with slightly different math:

Although the thousand years line was tacked on to even really old versions of this claim, it appeared at some point in 2018 it was fleshed out to add that no one could explain the calculations:

Today the whole world is the same age! There is only one chance every 1,000 years.
Your age + your year of birth, every person is = 2018
It is so strange that even Chinese and foreign experts cant explain it! You figure it out and see if it is 2018.
Worked for me, you??

This year,the whole world is the same https://t.co/7NGoV2sZMl's a special day that happens every 1,000 years.Try bringing your age plus the year of birth to be equal to 2562 as well as everyone. It's amazing Even any national astrologers Can not explain & more will happen again

Today the whole world is the same age!
Today is a very special day. Theres only one chance every 1,000 years.

Its so strange that even Chinese and foreign experts cant explain it! You figure it out and see if its 2018.

Another element was that in every popular version’s comment sections: Some (but not all) commenters said that the numbers added up to the previous year, not the current one:

A simple explanation exists for both the math itself, the above comments, and even the meme’s cyclical spread.

The year you were born added to your age will always add up to the current year — after your birthday that particular year. However, if your birthday is later in the year, the calculation will produce the previous year. As one blogger noted in 2017, that disparity completely disappears on December 31 of any given year:

As for the third matter — the claim’s repeated spread — that is because at its core, the meme is an ideal way to drive Facebook shares, Twitter retweets, and visits to a blog. In its 2019 form, the meme also featured additional elements to exacerbate its spread:

A tacit sense of urgency or claims that something interesting is inexplicable drives interest and sharing or clicking. On its own, the claim looks interesting to people who haven’t thought it through. Coupling that initial lack of understanding with mystical sounding elements essentially ensures the meme’s enduring virality. Finally, everyone has a birthday, giving the claim a much wider appeal.

Although it’s technically true that adding your age (in the majority of people) and your birth year equalled 2019 in 2019, we’re rating this claim “not true” because it’s not a rare occurrence, it’s not a mystery, almost anyone can explain it, no experts are befuddled by it, and it’s true for any year. Your birth year plus your age (if your birthday has already occurred) will always equal the current year, for every single year in existence.

The post Does Adding Your Birth Year to Your Age Total The Year Number Once a Millennium? appeared first on Truth or Fiction?.

Does Adding Your Birth Year to Your Age Total The Year Number Once a Millennium?