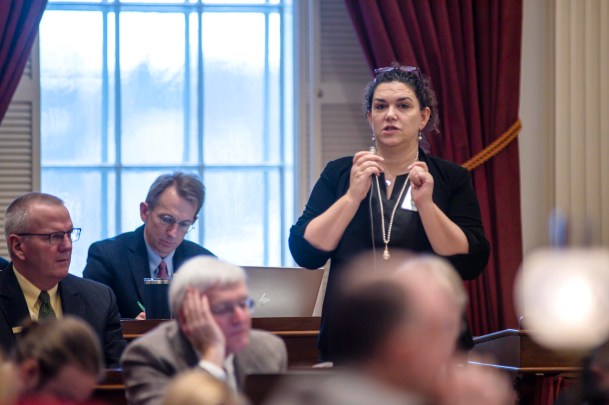 A call from a Vermont phone number last week caught Readsboro Selectman Raymond Eilers off guard. The 802 area code was familiar, but the woman’s voice on the other end of the line was not.

While he’s hazy on what exactly the caller wanted, Eilers recalls that she had a message for him about the “bottle bill” — H.175 — being deliberated in the Vermont House. Before he had a chance to collect his thoughts the caller had connected him directly to Rep. Laura Sibilia, I-Dover.

Eilers, 62, was embarrassed that the caller had put him through to his local representative when he didn’t have anything to say about the legislation.

“It was ridiculous,” Eilers said. “I think the lobbyists who set that up should be thrown out of the chamber.”

The call, it turns out, was part of a strategy wielded by a group of business lobbyists aimed at thwarting H.175’s recycling reforms through a “grassroots” effort.

That campaign has sparked confusion among lawmakers and constituents who have found themselves on the receiving end of the lobbying efforts — and drawn criticism from environmentalists who say the group is being deceptive about its intentions.

H.175 proposes changes to Vermont’s bottle law, which since the 1970s has given consumers a 5- to 15-cent incentive for returning used beverage containers to redemption centers. The bill would add new bottled beverages that are not covered by the original law, such as single-use water and sports drinks, to the list of returnables.

The Vermont Public Interest Research Group and other environmental groups have pushed for the reforms on the grounds that they would reduce fracking required to produce new plastic and increase the number of bottles made from recycled material. Other state Legislatures have considered similar reforms.

Business groups and the Vermont recycling industry say expanding the returnable law would cost Vermonters more and would increase the burden on the state’s recycling processors. Recycling already yields few opportunities for reuse of materials, they argue, and the bill would make that process more expensive.

As states around the country have considered bottle law reforms for similar reasons as in Vermont, multinational corporations including Coca Cola, perennially one of the world’s top plastic polluters, have thrown their weight behind opposition to those bills.

Around the same time that the Vermont House’s Ways and Means Committee debated H.175 last week, a page called Vermonters for Recycling appeared on Facebook. The authors of the page began posting regularly about downsides of the costs that the bill would incur for Vermonters, calling the legislation “a solution in search of a problem.”

Vermonters for Recycling claims to be a “community organization” that “advocates for smart, reasonable and effective solutions for the effective reuse of waste materials in Vermont.” But despite the grassroots appearance, the group is run by a Boston-based lobbying firm hired by Vermont business groups that oppose H.175.

Casella Waste Systems and the Leonine Group, a Montpelier firm that lobbies against bottle law reform on behalf of the Vermont Wholesale Beverage Association, are part of the effort. Leading the charge is Five Corners Strategies, a Boston-based lobbying firm that runs “innovative grassroots” public affairs campaigns.

Paul Burns, VPIRG’s executive director, said the Facebook page is a form of “astroturfing” — an attempt by corporate interests to whitewash lobbying campaigns as grassroots activism. In California two years ago, a campaign using those same tactics sank a legislative attempt at recycling reform that’s since been revived.

By painting themselves as a community group, Burns said, the organizations involved are misrepresenting their true intentions.

“This level of deception, to me, smacks of desperation by the industry, as though it wasn’t working when they self-identified as industrial opponents of a bottle bill recycling program,” Burns said. “So now they have to pretend to be environmentalists.”

Legislators reported receiving confused calls about the bottle bill from constituents around the same time that the Vermonters for Recycling Facebook page became active. The calls left lawmakers as bewildered as their constituents, said Sibilia, the representative from Dover.

Sibilia has had several such conversations with constituents about the bottle bill in the past week, she told VTDigger.

She could recall only one previous instance of lobbyists connecting constituents directly to lawmakers by phone.

Thomas Ahern, a lobbyist for Five Corners Strategies who is heading the Vermonters for Recycling effort, told VTDigger the campaign has been using a “patch call” program to reach people about H.175.

“What we’re doing is we’re explaining our position on the bill, and then we ask the voter if they would like to be patched directly through to their legislator to let them know their position,” he said.

The effort has provided an opportunity to educate Vermonters on the cost of recycling reforms, Ahern said, and he’s been pleased with the reception.

He confirmed that Casella, whose CEO has been a staunch opponent of the bill, and the Vermont Wholesale Beverage Association approached Five Corners about running the lobbying campaign. In a statement provided to VTDigger, Casella spokesperson Jeff Weld said that the effort has received financial support from his company.

“We believe strongly that this legislation is damaging to Vermonters and damaging to recycling,” Weld said.

Despite business groups’ arguments to the contrary, Burns said a recent VPIRG poll showed most Vermonters support bottle bill reforms. “I think the depth of public support for this recycling program is one of the things that is causing the industry lobbyists to get a little desperate right now,” he said.