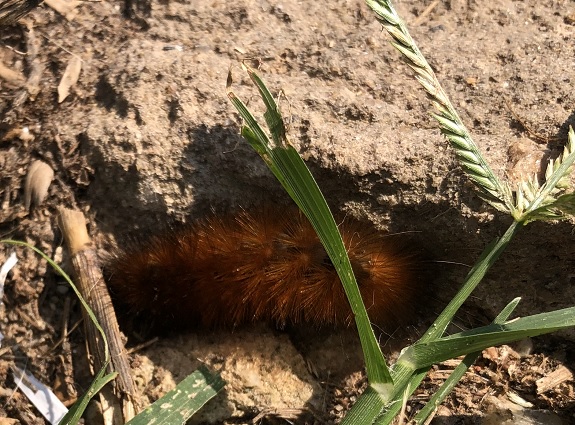 If you know, you know.
Weather.gov is honest to god a pretty incredible website.** But -- hands down -- my favorite noteworthy little subpage, tucked gently into the archives for just the special few who google this arcane bit of trivia.... is the page dedicated to:

The story goes, if you want to know what to expect in the coming winter, check in with your resident caterpillars. Specifically, the Woolly Bear caterpillar, who is typically black at head and tail, and orange in the middle.

Here in Maryland, we grew up understanding this to be nothing less than Accepted Canon -- the sacred principle by which we (and obvi, by "we" I mean me and my sister as small children, obvi) braced ourselves for the coming winter.
So, obviously, it's always something of an Exciting Moment for me when I spot my first Woolly Bear of the season. Which I did so last weekend just outside the feed room shed.
AND!! It was this full-orange dude, undeniably signaling a mild winter to come! Yessss!!!
(Let's just ignore recent precedent described above, yes?)
Except, hrm. Just days later, strolling out to the jump ring astride my favorite OTTB Charles... Well, I happened to spot this absolutely gargantuan be-furred beastie on the fence post.....
Oy. Ok. That's a big Woolly Bear, guys.
And not a single twinge or tint of rusty orange to be found. Foretelling a longer, snowier, colder, more severe winter ahead.
But what does it mean???
I gotta be honest, my heart is 100% set on a mild fall and gentle onset of winter.... Because it's my favorite season and who could deny me my own selfish whims?! But... It's also been a couple years since we had any sort of epically apocalyptical snow storms or deep freezes.
Apparently we're all just going to have to wait and see, tho, since even our resident denizens the Woolly Bears can't come to a consensus on what to expect, womp. At least they're cute..ish??
(**Seriously tho, have you ever scrolled all the way to the bottom and perused all those many, many links?!)
Source: fraidycateventing