Pork shanks do really well braised. I have been struggling with braised meat recently. It becomes tender but loses its flavor to the sauce. I was in need of a braised and glazed piece of meat. I reminisced to the days of slowly lacquering a piece of meat in a pan. When I came across some pork shanks in the store I had high hopes of reliving my dreams. We braised the shanks in an enriched broth. We strained the broth and let the shanks cool in it overnight. The following day we gently warmed the shanks in the broth. We pulled them out of the broth and put them in a pan on the stove and slowly started basting them in the broth, allowing it to reduce and thicken. I added additions of broth to the pan only when the initial broth was almost completely glazing the shanks. The result was a sticky shank sitting on a bed of grits with sauteed cabbage. The sliced jalapenos were my needed spice addition. 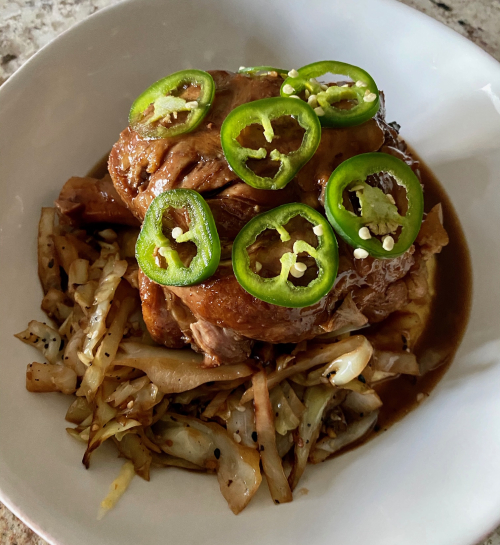 Ideas in Food: Great Recipes and Why They Work

Maximum Flavor: Recipes That Will Change the Way You Cook

Gluten Free Flour Power: Bringing Your Favorite Foods Back to the Table