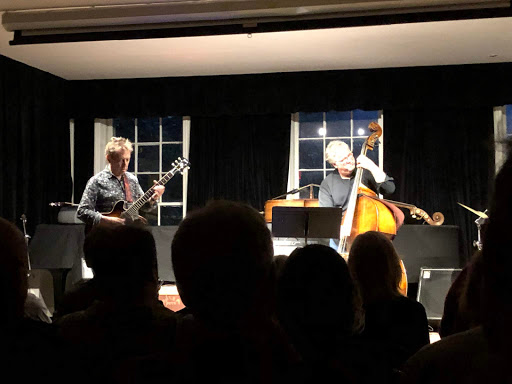 The other week, New York was the beneficiary of a fortuitous coincidence. Scheduling at two of its premier cultural venues focused on the work of Thelonious Monk. The first of these two nights was at Greenwich House for their second annual fundraiser that spotlighted the theme of Monk on Guitar. I had been at last year's show and knew enough to buy tickets early, and indeed the show was sold out in advance.

One of the big draws this year was Andy Summers, best known as the guitarist of The Police. Because his presence shaped the evening, I will start with him. His performance was the opening set of the second half of the evening and went for about a half hour. Summers showed great familiarity with the music of Monk. He got a chance to work with many of the other participants in this benefit, which seemed to delight most of those musicians who got the opportunity to perform with him. During his set he paused to thank Steve Cardenas who, along with Don Sickler, co-authored The Thelonious Monk Fakebook, the first one-volume compendium of all of the Monk compositions.

I really enjoyed this portion of the evening because it felt so natural. Just a bunch of players performing their favorite tunes. Oddly, with the end of this set, a lot of the audience simply left the room. This was disappointing to me as I felt all the performers deserved the attention of this sell-out crowd.

The evening actually began with Miles Okazaki who recently released a recording of the complete works of Monk on guitar in a 6-volume set titled "Work". While he played in different contexts during the evening, he began the night solo. You got the chance to see the supreme technical mastery that has had guitar aficionados raving. Like saxophonist Steve Lacy and pianist Alexander von Schlippenbach, he has clearly followed Monk's example and made each song a focus of his praxis.
Performers came and went with nearly every turn resulting in a new line-up. Guitarist Nick Millevoi acted as bandleader. Some of the performers included Steve Cardenas, Harvey Valdes, and David Gilmore on guitars with Stephan Crump, Michael Formanek, and Jerome Harris on bass and Francisco Mela, Satoshi Takeishi, Richie Barshay and Kate Gentile on drums. While the non-guitarists did not get much of an opportunity to shine, they provided fantastic support.

Now for an admission, I can always tell a Monk song when it is being played, but I often can't put a name to the tune. This makes me feel guilty since I play Monk's music frequently. I have twice travelled to Berlin to see Monk's Casino. It is for this reason that I have been cheating here and not mentioned who played what. I wonder how many of you share this quirk or if it is just me. The show concluded with the sole non-Monk composition, a solo Message in a Bottle, by Andy Summers, who returned to a partially empty room. At any rate, I had a great time at this show and look forward to the third iteration next year.

The next night was something else again. Since hearing the release of Solo: Reflections and Meditations on Monk on Tum back in 2017, I have been hoping for the opportunity to see Wadada Leo Smith perform it. His week-long residency at the Stone provided that opportunity. Though the audience was smaller than I expected, those present got a real gift in the form of one of the most intimate and personal shows I have ever seen. It is hard to imagine separating Smith from his music; they are one being.

Some Monk tunes were only hinted at, while others were played at length. In between some of the most glorious trumpet playing I can imagine, Smith played abstractions on piano. Later when he described why he did this, the answer seemed to be that he wanted to shift our perspective. Indeed, he has always been a trickster who often speaks in Zen Koan-like phrases. This was underlined by the end of the show when he started to offer $40,000 to anyone who could guess the next tune. He promised it would be the shortest version of any Monk tune we had ever heard. Then, he foiled all expectations by going into a ten minute version of Round Midnight, one of the most famous of all the compositions in Monk's repertoire. In a way it was the shortest in that the song was so brilliantly played that I wished it could go on forever.

During the performance Smith talked about the intimacy and fragility of the music. The night was suffused with that feeling. The show ended with Smith giving everyone in the audience a hug or at least a handshake. It is performances like this that have created an almost limitless goodwill towards this man.

On Saturday night I went back to The Stone for the last night of Leo Smith's residency and was rewarded by another amazing set. This time, probably due to the appearances of Bill Laswell and Melvin Gibbs, the room was sold-out. The eight piece group also included his long-time partner Pheeroan Aklaff, his grandson Lamar Smith, and Hardedge. Together they created a beautiful sonic background for Smith's trumpet, which cut through the beloved Laswell murk like a beacon. I want to take this opportunity to mention the contributions of guitarist Brandon Ross who was terrific at this performance and even more crucially at Smith's trio performance at the Vision Festival the previous week. Again, this show also became about intimacy and family as Smith ended the night by introducing his granddaughter, who was seated in the front row along with other members of his family. After a brief hug with the master, I left feeling an even greater connection to this radiant spirit.
.