Today, the Covered Calls Advisor recalculated the current values for each of the seven factors used to determine the "Overall Market Meter" rating.  The result is that the Covered Calls Advisor's current market viewpoint changes from Neutral to Slightly Bearish.  A graphical representation of the "Overall Market Meter" is shown in the right sidebar on this page. 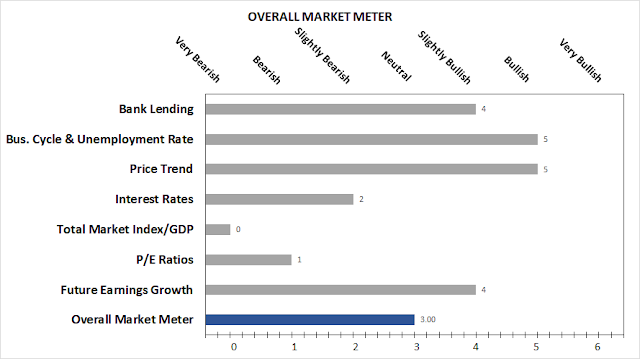 The Macroeconomic factors are Bullish, the Momentum factors are Neutral, the Value factors are Very Bearish, and the Growth factor is Slightly Bullish.  The two Value indicators are especially noteworthy and concerning:
The current very high market valuations explains why the Covered Calls Advisor Portfolio is now establishing only conservative in-the-money positions.

Finally, in February last year, the Covered Calls Advisor posted an article about the 'Emotional Roller Coaster of Investing' (Link to Article).  A Covered Calls Advisor post on December 13, 2017 took a position that we were in the 'Exhiliration' stage and that passing the proposed Tax Reform Bill might be the final step that would transition investors further into the 'Euphoria' stage. Furthermore, passing such a bill into law might result in yet another short-term all-time high in the stock market.  This is precisely what occurred -- the bill was passed, signed into law on December 22, 2017 and the Wilshire 5000 hit its all-time high of 29,760.59 on January 26, 2018.

But when it comes to investing, the Covered Calls Advisor now advises 'extreme caution' since, as the 'Emotional Roller Coaster of Investing' graph shows, 'Euphoria' is subsequently often followed by 'Unease' which is accompanied by additional declines in both investors' sentiment and stock market prices. 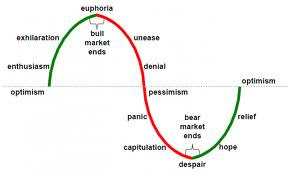 This concern is also confirmed today by the Covered Calls Advisor's Overall Market Meter rating change from 'Neutral' to 'Slightly Bearish' .  The quotation shown in the 'Investing Words of Wisdom' section in the right sidebar of this blog by legendary investor and humanitarian John Templeton is very appropriate at this time in the market cycle:

To share your comments or questions regarding this post (or the details related to any of the seven factors used in this Overall Market Meter model), please click on the Comments link below or email me at the address shown in the upper-right sidebar.