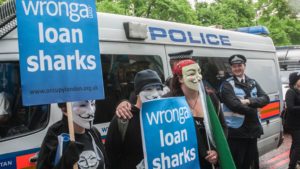 A crackdown on payday lenders could result in the industry disappearing in three years’ time, it has been claimed.

The number of payday loans taken out in the three months to the end of September fell by 37 per cent to 807,723, according to analysis of Financial Conduct Authority data by Wagestream, a financial technology start-up.

That is an acceleration from a 34 per cent year-on-year drop in the second quarter, a 32 per cent slide in the first, and a 23 per cent fall in the final quarter of last year.

The number of payday lenders fell to 61 companies during the third quarter, down from 88 in the same period last year. The rate of decline puts the industry on course to die out by the end of 2022, Wagestream estimated.

There has been pressure on the industry since the City watchdog introduced tougher rules almost five years ago, including a cap on the cost of loans after considerable criticism of the high interest rates that were being levied when payday lenders flourished after the financial crisis. The clampdown has caused a number of lenders to collapse.

Piggybank became the latest payday lender to fail when it went into administration this month, days after 247Moneybox went bust.

In October Quickquid said it would close while Wonga, which had been Britain’s biggest short-term lender, collapsed last year. The decline has raised concerns that borrowers could have to turn to illegal loan sharks.

Wagestream, the London-based company founded last year, has an app that allows workers to access their monthly salary before payday. Peter Briffett, 47, co-founder and chief executive, said consumers are getting wiser to how much misery such loans cause.

Read more:
Payday lenders could disappear within next three years after crackdowns