Physicist: The multiplication rules for signs are

You’d be hard pressed to find someone who disagrees with the first rule, and if you press hard you’ll find that almost everyone has been confused (at least once) by the third.  In a nutshell, if you try to define the multiplication rules any other way, arithmetic stops working in a big hurry.  Or at least, you have to scrap a lot of other math that’s incredibly useful.

When you multiply X by a positive integer Y you’re adding it to itself Y times.  So it makes sense that a positive times a positive is positive.  For example,

.  By looking at 3 (or any other number you like) multiplied by smaller and smaller integers you see a pattern:

Every time you multiply by a one-smaller-number, you take away another 3.  Following the pattern, we take 3 away from zero and make a decent guess at how that pattern should continue:

Do this for a couple of different numbers and you can construct a multiplication table.  Like this one! 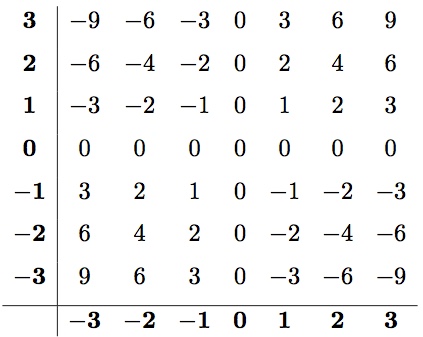 If the “negative times a negative” quadrant on the lower left were all negative instead of positive (e.g., “

“), then the rows and columns that go through it will suddenly have to switch patterns (e.g., “increasing by 3’s” to “decreasing by 3’s”) when they pass zero.  In some sense, the rules for signs are set up so that multiplication tables like this follow a nice, simple pattern.

” is a clean, reasonable way to define multiplication.  But does it work with the rules of arithmetic?

In particular, the distributive property, which says that

, is one of the backbone rules upon which all of arithmetic is built.  In fact, this property is literally the thing that defines the relationship between addition and multiplication!  For example,

because “3” is defined as “3=1+1+1”.  Losing the distributive property basically means you need to go home and start designing a new (and worse) kind of math from scratch.

For positive numbers there’s no issue, because (practically) everyone is fine with the “

But if you insist on using the rule “

“, then you’ll find the distributive property doesn’t work.  For example,

” in order for arithmetic to work.

And if you begrudgingly allow the “

” rule, but refuse to accept the “

” rule, then consider this:

On a case-by-case basis, it’s not obvious that a negative times a negative should be positive.  But when you look at lots of examples and the number system overall, you find that the “

” rule is kinda hard to avoid.  Using a different rule means asking a lot of hard questions, like: What is negativeness?  Which rules of arithmetic are worth keeping?  What is the sound of negative two hands unclapping?

Using the wrong rules is a good, practical, and genuinely useful training in what not to do.  It’s well worth your time to shake off the shackles of mundanity and conformity, so that you can forge into a world of new discoveries.  Specifically, you’ll discover why arithmetic’s shackles are usually left unshaken.